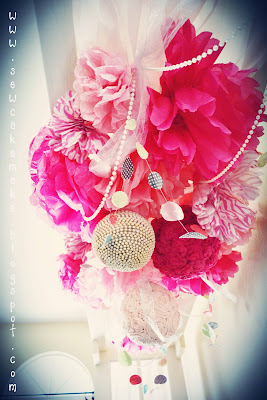 I have been sanding away at all those wooden blocks ordered for Super Saturday.  I finally sat down a moment and thought I'd show you the Fabric Party Garland I made as accent for the Tea Party last month.
I wanted a little eye candy to decorate the ceiling.  That was when I decided to add the fabric garland to my to-do list. 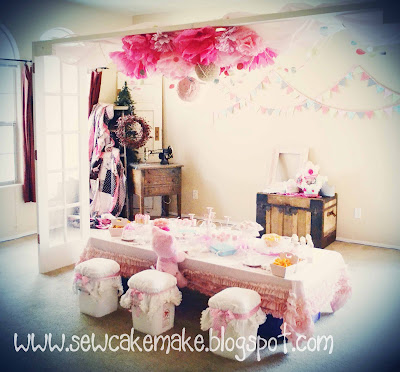 I planned for the table to be decked out with ruffles and lace, but wanted to decorate above the table also.  Long story short, I had Scott build a false ceiling of sorts out of two old doors and a couple of 2x4's.  It worked like a charm.  I was able to string up tissue paper pompoms, decorated hanging balls, pearls and my Fabric Party Garland with ease.  My hubby is the best.  Every time I come up with a crazy idea like this he just smiles, pulls out a pencil and paper, and begins sketching the plans.  What an engineer :0D 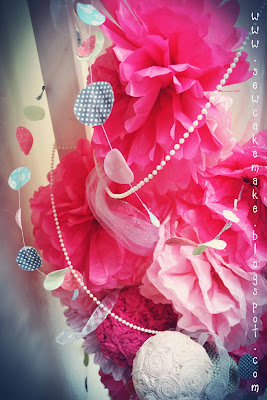 There was a good amount of scrap fabric left over from the princess crowns and fabric bunting I made so I made the whole thing from the scraps.  I didn't want a bulky addition to the pile since the pompom flowers are so fluffy and big.  That was why I chose this particular way of making the fabric garland, flat and spaced. 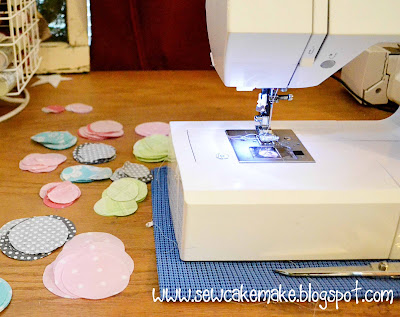 I used my sizzix punch the scraps into circles.  With the fabulous sizzix machine, the circle making only took a couple minutes.  I divided the circles into color and then into size ranging from 1" to about 3". 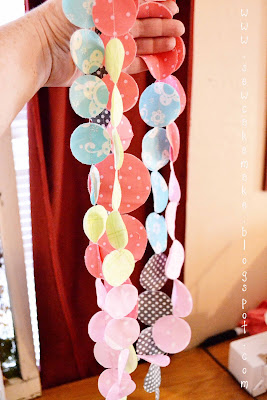 I wanted the circles to be two sided so I took two circles of the same size and color, put them wrong sides together, and then stitched them in place.  You probably know this trick, but I like to save thread by sewing the pieces one right after another.  Simply sew together one pair of circles, leave your needle down in that pair right at the edge of the fabric.  Now pick up your next pair of circles, raise your presser foot and slide them underneath, butting them right up against the edge of the first circles.  Stitching the circles one right after another, never cutting the threads.  You end up with a long string of pieces like shown above.  This technique works fabulously when piecing a quilt.  It saves time and thread. 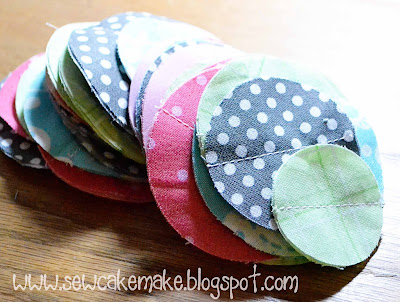 Once all the circles are stitched in one direction, snip them apart and sew them again, like adding the second line of an X.  I decided to sew them this way because I didn't want them to flap around.  I suppose you could put a circle of heat-n-bond or something inbetween, but agian, I was going for fast, simple, and most importantly, Cheep! 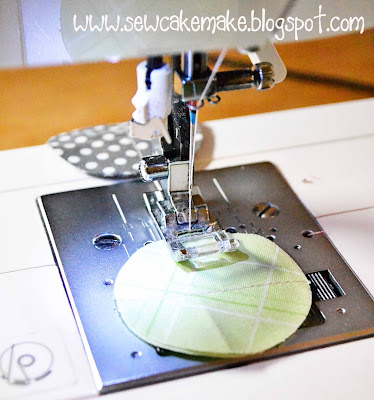 This time-go-round of sewing circles, I didn't cut the threads like before.  Once I stitched through one circle, I pulled that circle to the back of the sewing machine plate {so there is a string of thread about 1-2" long, and then add the next circle to be sewn.  *note* you have to hold on to the finished circle towards the back of the machine while you start the next to make sure the machine doesn't pull the bobbin thread back down, making your two threads uneven* 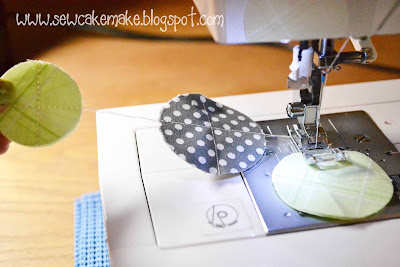 It will look something like this.
Just keep going.  I should mention that I stacked the circles in a pile before starting, placing them in the order I wanted them to be sewn in.  I hope that makes sense.
Now there are a couple variations to this garland.  You can actually sew 3 or 4 pieces together, and not sew them in an "X", but just sew one straight line...you know, like an "I"  That will give you a pompom look with the fabric.  Also, you can use paper instead of fabric!  Shocked?  I know!  But it works fabulously!!!
The paper garland can be one or more pieces.  When you use 2-3 pieces of paper, you can sew them right on the sewing machine in the manner shown in the picture above {just one line of stitching though, the "I", not 2 making an X} and then go back and bend the paper open to make a 3D effect.  Fabulous!

These garlands make a fun addition to any party space, and best of all, they are very inexpensive to make!  They don't really take much time.  If you have an hour and a pile of scraps you can pop out a little eye candy of your own.  Give it a try :0)