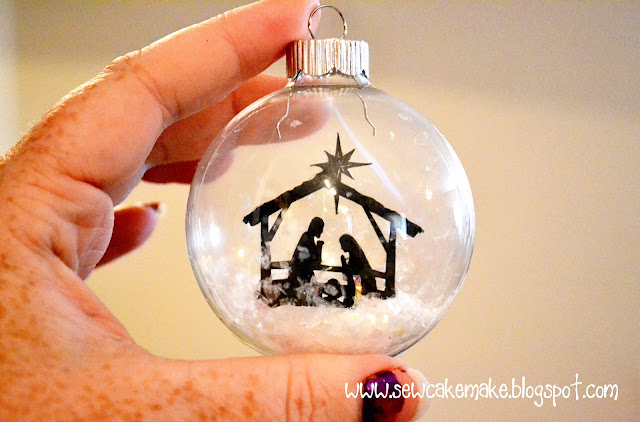 I spent weeks searching, late into the night, for an easy-to-make Christmas Ornament that amazed me.  After many-a-clicks, I finally found instructions to make this beauty!!!  It will be one of our Super Saturday crafts and I will show you how to make it.  First, if you would like to see the original video tutorial you can find it HERE at Liz's Paper Loft. 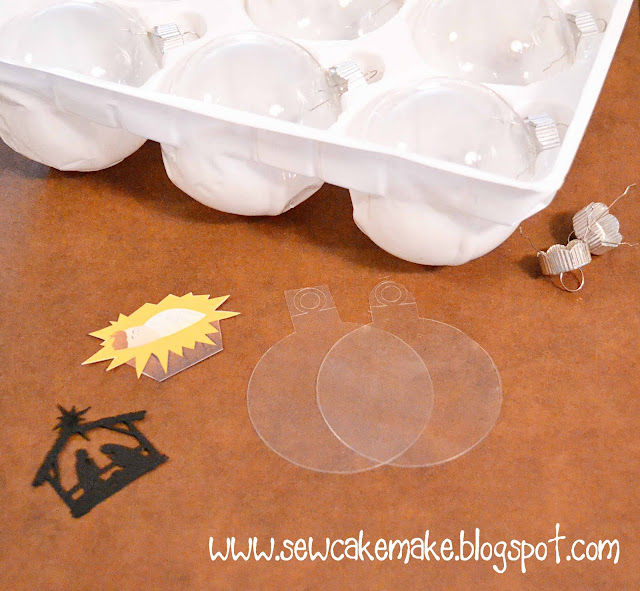 Materials:
Glass or Clear Plastic Christmas Bulbs
1 sheet of Overhead Projector Film {bought at Office Max for $0.40}
1 Image per Bulb you are making
Glue-For the silhouette I just used hot glue :0)
Snow Flakes-like for a Christmas Village
{bought at craft stores-Hobby Lobby already has theirs out in July} 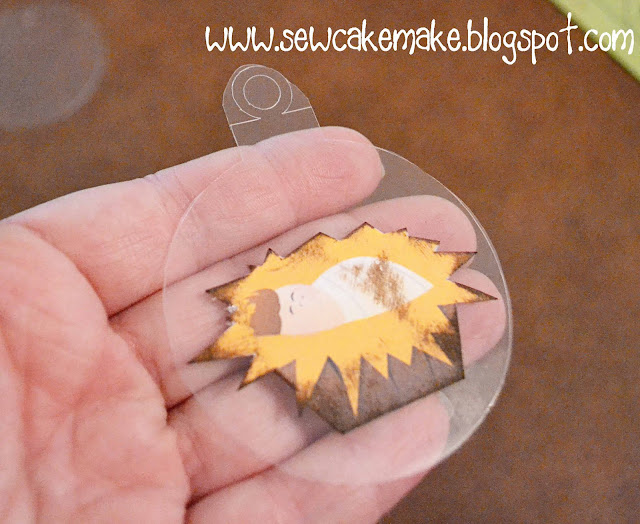 Poor Baby Jesus, he got a little dirty after things got little crazy with the distressing ink.  I was too lazy to cut out another baby, so we will all just have to suffer.  How clean do you think that trough manger was anyway?

First step to this ornament is to cut a bulb shape out of the overhead projector film {also called acetate paper}.  I used my Silhouette to cut it, but you can free-hand draw one or print this file if you want.  I got about 9 out of one sheet of film.  My bulbs said they were 2 5/8" wide, so I made the ornament 2 1/2", just smaller so that the film would not bow or bubble and catch the light inside the ornament.

***Update*** This just in :0) Lori Whitlock, designer of the nativity cutout, contacted me last night to let me know she made a FREE downloadable file for the clear ornament insert.  This file includes a JPG for printing as well as SVG and DXF files for you Silhouette, Cricut Expression, and any other cutting machine that will use these files.  You can find it at this post  on her blog LoriWhitlock.com. 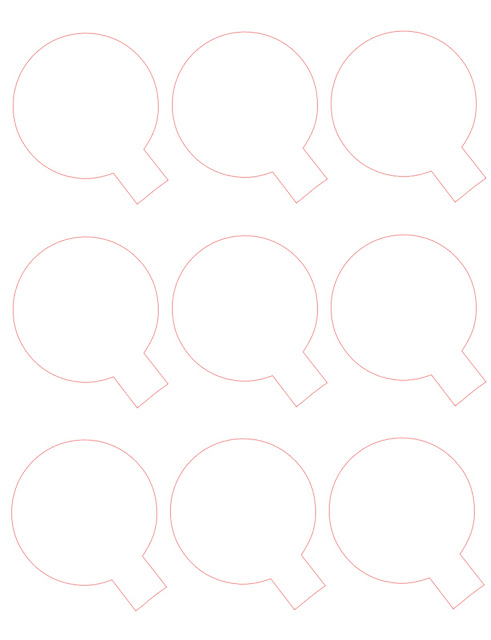 The original video uses a circle, not the ornament shape.  They then spend a great deal of time trying to get glue dots into the glass bulb using tweezers to hold the circle of plastic in place.  Envisioning several ladies surrounding one Super Saturday table with tweezers raised in the air and cursing my name, I brainstormed for a better way to make the film stay in place.  That was when I decided to just leave a stem on the circle, like an ornament!  Ahoy!  It works perfectly...but more on that later.

Glue the image to the ornament shape, just below centered, and with the step pointing straight up.  In the end, you will put a bow on the ornament and need the image down a little to be able to see it after you glue the bow on.

***2013 Update***
I no longer use paper nativities.  I have fallen in love with vinyl and skip the whole glue the shape to the insert step with self adhesive nativities.
Here is what I do instead:
Purchase Nativities And/Or Ornament Inserts from TheBubbleBox on Etsy {also known as me ;0}  Once they come in the mail, cut the nativities apart, pull out your clear inserts and follow along.
Peel the white paper backing off the transfer tape. The nativity should be stuck to the transfer tape {the opaque sticky paper}. Lay the transfer tape with nativity down on a table, sticky side up. Now take your clear ornament insert, with tab at the top, and lay the clear insert on top of the transfer tape/nativity. I like to do it this way so I can see where the nativity is going. I center the nativity in the middle of the insert side to side, but just a little lower than center when you look from top to bottom. . If you put bows on you will want the nativity just a little lower than centered. Turn the whole thing over so the transfer tape side is up, and rub it all down with your fingers to make sure the black nativity sticker is stuck down. Now you will peel off the clearish transfer tape, leaving just the nativity stuck to the clear ornament insert. 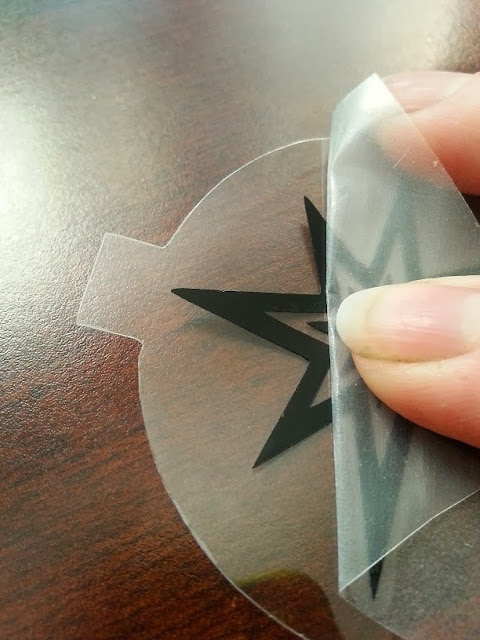 When I peel that transfer tape off, I don't pull it up necessarily, I like to start it peeling back, then more or less drag it off. By dragging it, the vinyl tends to stay in place better. If you lift up with that transfer tape it can pull the vinyl up as well.
I give one extra for every dozen ordered usually so you have extras to play with. I suggest making one ornament from start to finish first so you can adjust anything that needs to be changed. 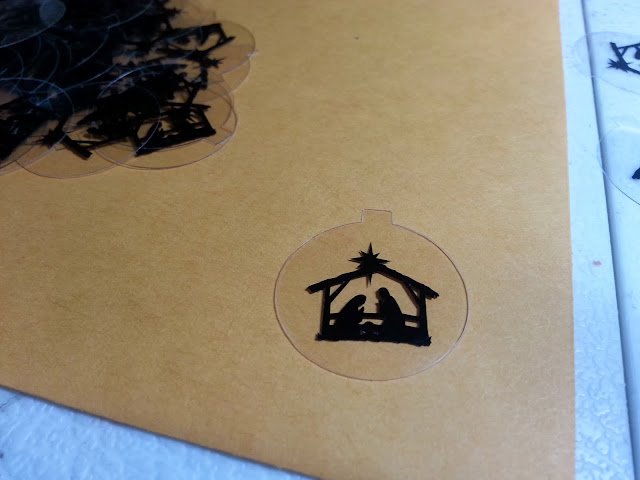 When you are done, your insert will look something like this. 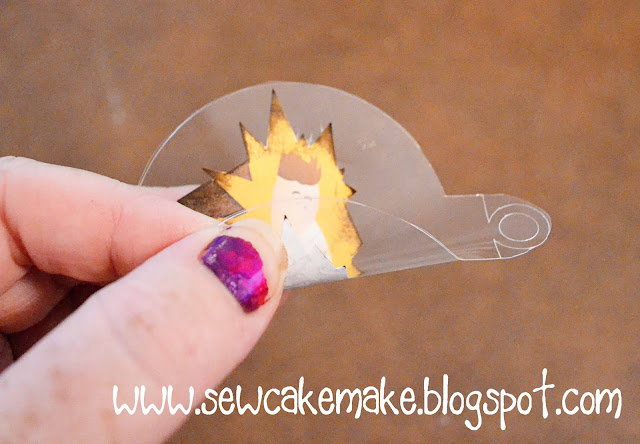 Here is the magical part.  Put your wands away ladies, you are gonna fold it! 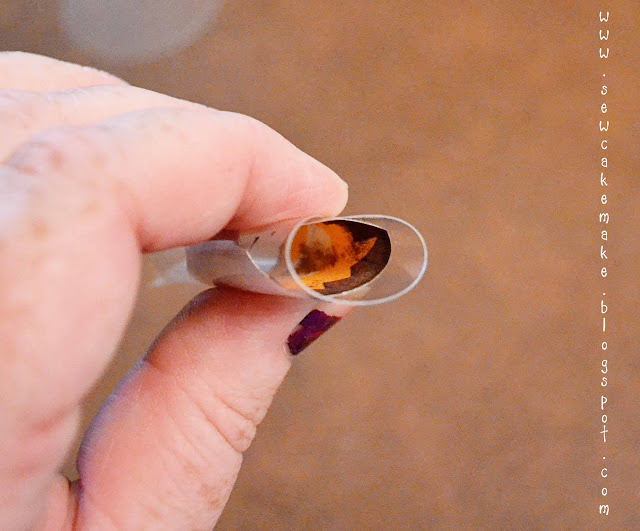 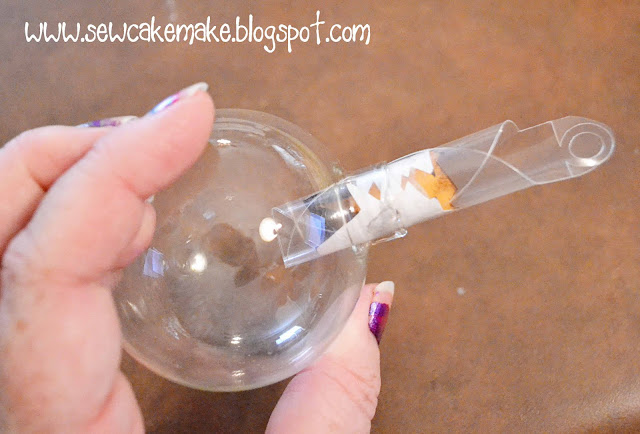 Insert!  Like a message in a bottle.  This is so fun, the kids will love it!  You just may want to buy the plastic ornaments so you aren't Swiffering glass shards off the kitchen floor in the middle of your craftiness time. 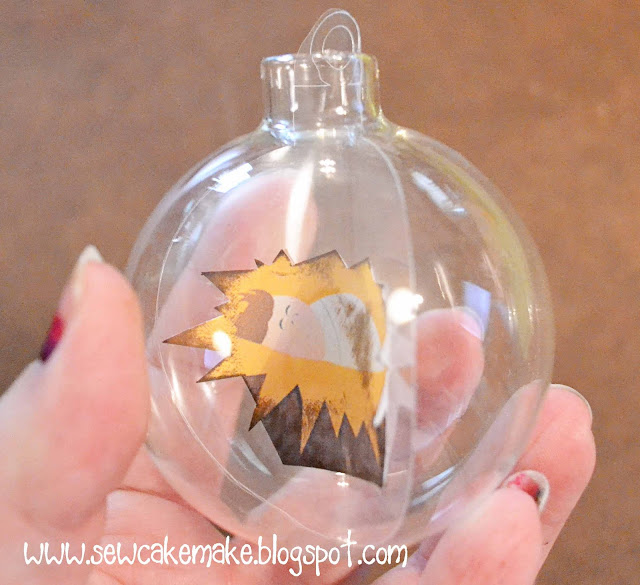 OK, once it is inside it will just pop open, but you can see how the sides are still bent inward a little. 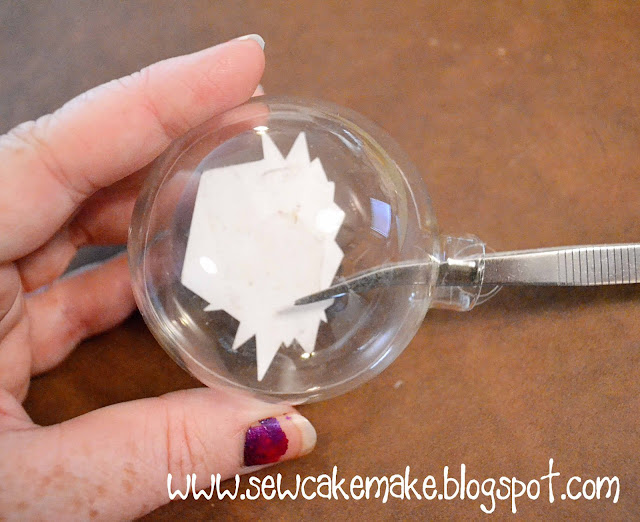 Grab the tweezers now and bend the sides backwards until they lie straight on their own. 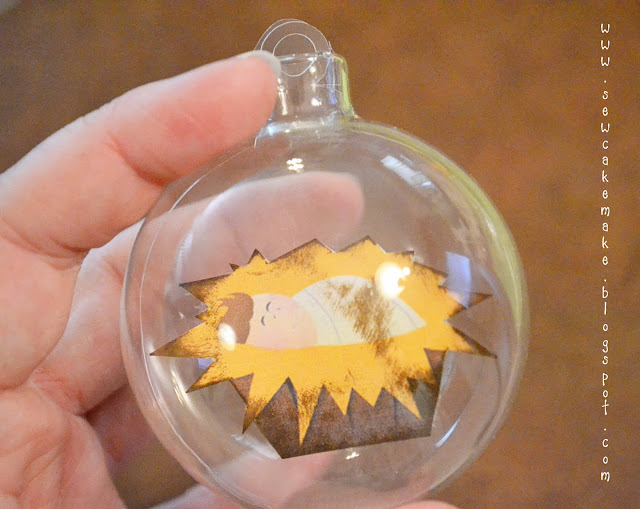 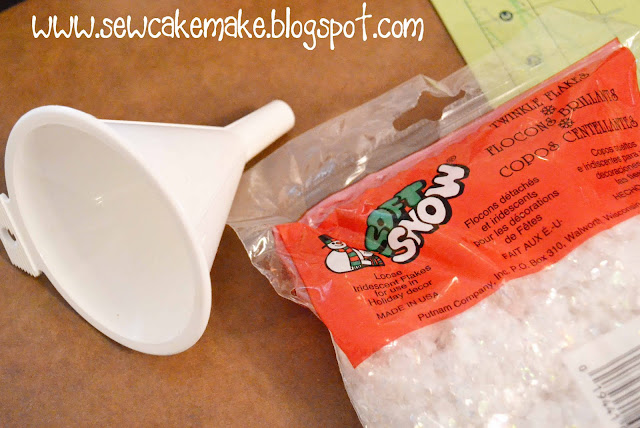 Now for the messy part.  I happen to have a funnel just the right size to fit into the ornament.  If you don't, you can make a cone out of paper {I do this like once a week-when Emmalee has stolen my funnel and is using it to play doctor with the cat ;0} and insert it into the ornament to act like a funnel.  The lady on the video just shoves the snow right into the hole using her fingers, no funnel.  You could do it that way too, but it is even messier. 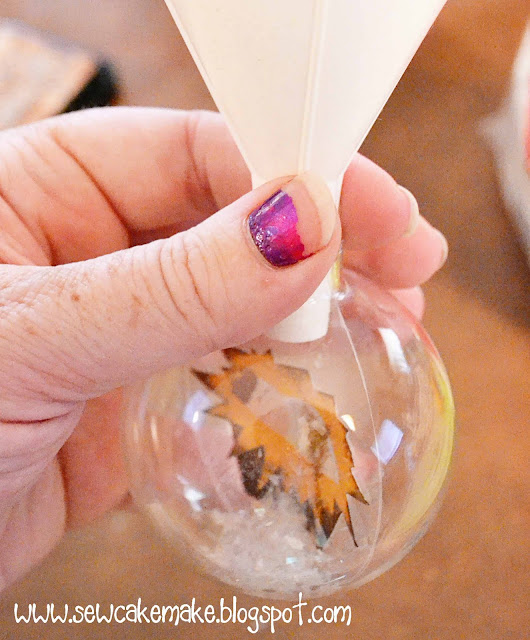 Put the funnel on the front side of the film and put in somewhere around 2 tsp. of snowflakes.  Take the funnel out, then put it back in the ornament behind the plastic film.  Put in another 2 tsp. of snow.  I am just guessing here, but I think you can get 24 or more ornaments all snowy inside with one small bag of the snow.  I bought the sparkly kind, which comes in an even smaller bag, and have plenty of snow for two dozen ornaments or more if I feel so inclined. 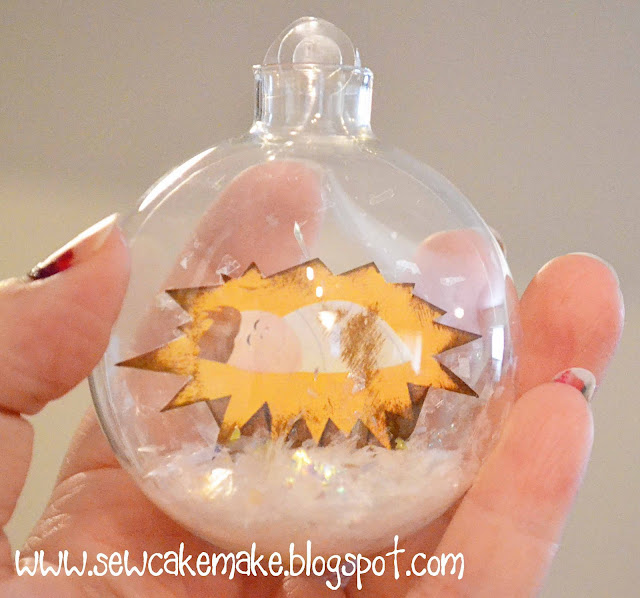 There :0)  Cute baby lying in a manger all surrounded by snow {Sigh} 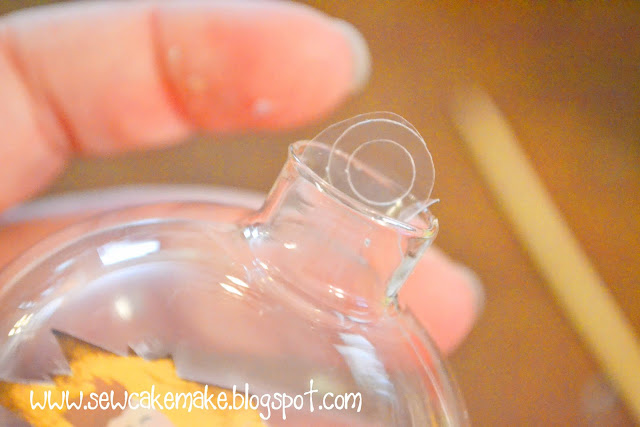 Whatever part of the plastic film that sticks out of the top of the ornament, snip off with scissors so you can put the lid on.

Here is the other ornament.  I bought this image from the Silhouette store online and used my Silhouette machine to cut it out.  Don't you just love it!!!   If you have another cutting machine, she sells the file in different formats.  You can contact her at her personal website.

Here are the ornaments after I put bows on them, plus two more I made. 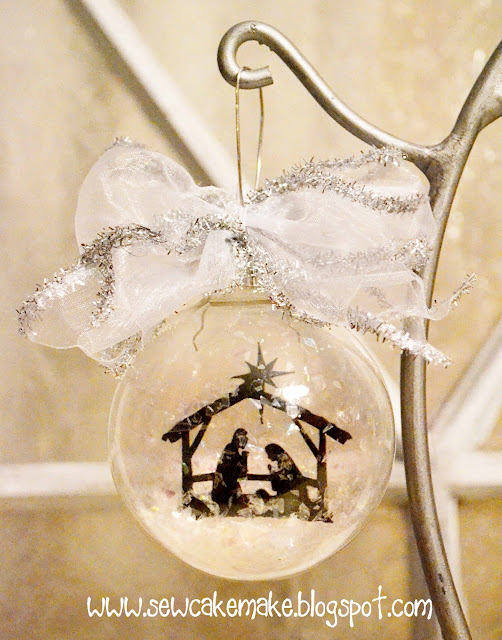 Hubby asked what would happen if the snow got shaken, so I shook it.  This is what happens.  You have snow stuck to the glass.  I think I kinda like it.  It makes me envision a snowy, blissful night.  I guess it is kinda like a snowglobe too.  You can decide if you like it better with or without the snow. 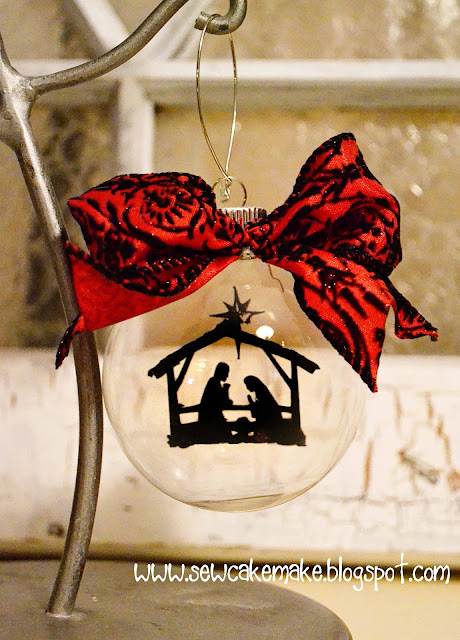 Here is the ornament, same shape, without the snow.  You really have to see these in person to get the beauty, and magic, of how the image just hovers and you can't see the film holding it there.  Liz, the inventor, is a genius! 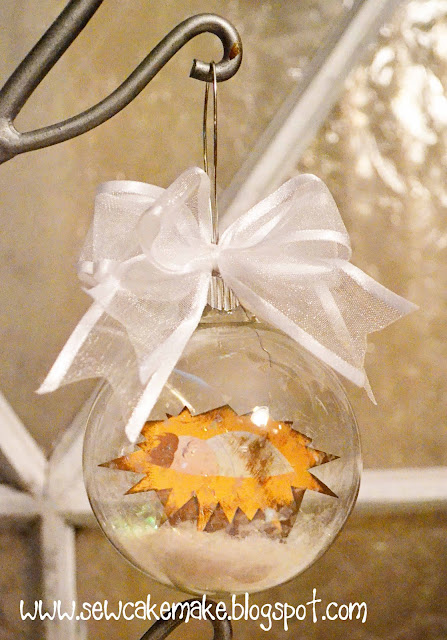 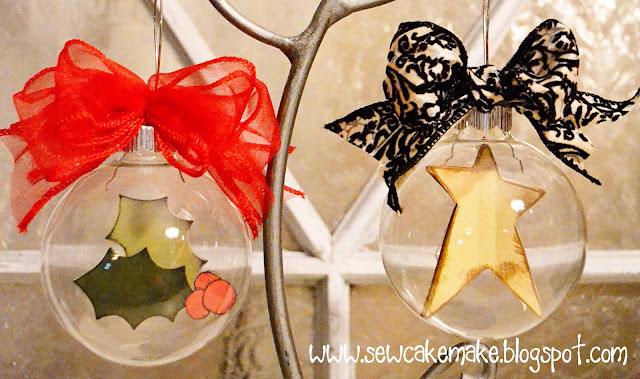 I used die cuts to make these two.  Really any shape would be awesome.  You could do family photos also. 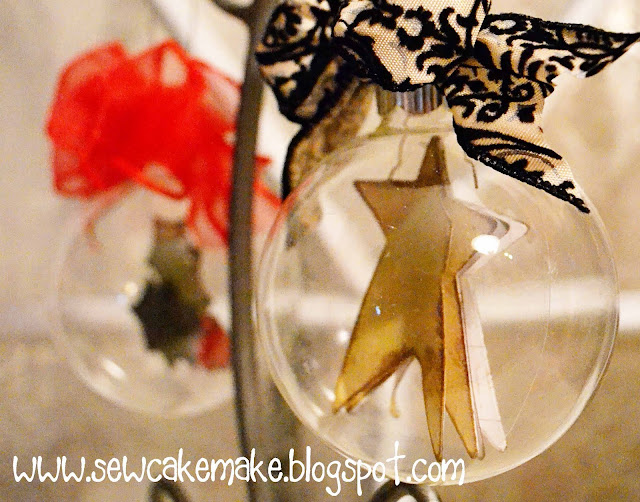 Four stars were used to make this ornament 3D inside.  I made one mistake when I chose pattern paper that was only one sided.  You can see the white one the sides of the star that are folded out-watch out for that. 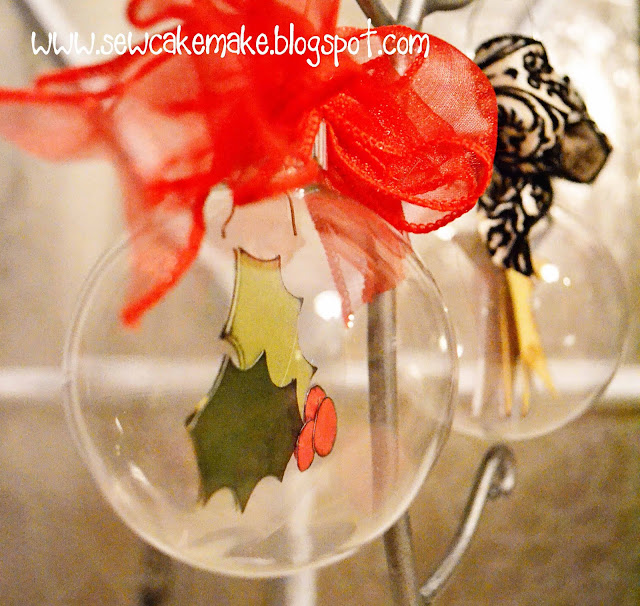 I did a holly bulb because I am obsessed with holly.  I think it is adorable.

Anyway, this was, hands down, the most amazing, easy to make ornament I found.  I would love to see yours if you decide to make some.  I may just have to re-post this idea when Christmas is actually near and the rest of the world is thinking about what to put on their tree.

***UPDATE***I now have the nativity cutouts {made out of vinyl} for sale on my Etsy Site for $4 a dozen!!!  I also have a listing for BOTH the nativities AND the acetate ornament cutouts for $8 a dozen.  I can cut out as many as you need!!!  Read more about that HERE or just go right to the source to pick up a set or more :0)***