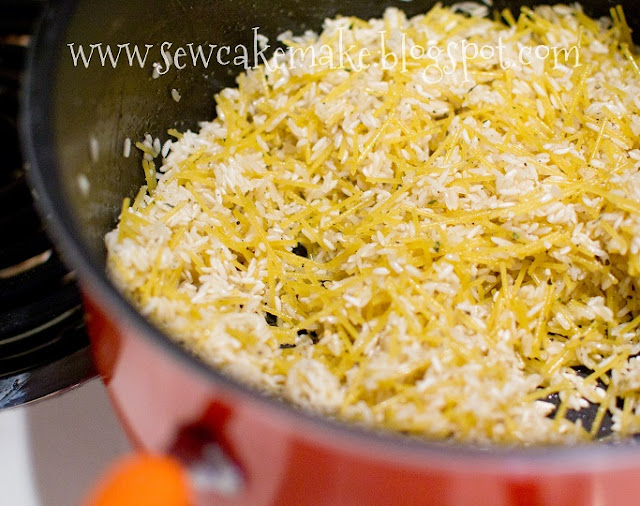 I came across this recipe this summer on pinterest and gave it a try.  It was so yummy I decided it was a real keeper.  Last night I made it again, home made Rice-A-Roni CopyCat.

The original post was by Kate over at Cooking During Stolen Moments.

As usual, I did a couple things differently, but you can always cruise on over and see the original instructions posted by Kate.

First step, break the noodles into bit-sized pieces.  I am gonna be honest, this step can be hard...or at least messy and hard to keep clean.  I used the plate method shown by Kate and had a huge mess on my hands.  My next idea was to put the spaghetti noodles into a ziplock bag and bang on it with a rolling pin.  That was still messy because the bag got holes in it and noodle bits went flying.
Last night, I pulled out my food processor, grabbed about half of the thin spaghetti and broke it in half and threw it into the food processor.  I let the machine run for a minute or so, then checked on the progress.  Half of the noodles broke down like I was hoping, while the other half were still really long.  With the second half of pasta I broke it into thirds or fourths before placing it into the food processor.  The bits did get smaller, though I still had 2" pieces.  I guess, if you have a food processor or blender, I would recommend that route over using a plate to break the noodles into bite sized pieces, but you will still need to break some pieces by hand once you process.

So, the first time I made this recipe, I had just cooked a bag of frozen chicken in the crockpot and used the resulting broth as the water in the recipe.  It tasted OUTSTANDING!  I would say that using fresh broth would be the preferred method, but making by the recipe was still a great close second.

First, get your liquid measured and ready to pour in.  Go ahead and mix the seasoning {chicken bouillon, salt, pepper, and Italian seasoning) in a small bowl so it is ready to throw in as well.  Just like rice-a-roni, you will melt the 4 Tbs. butter in a skillet and add the rice and pasta to the pan.  Stir on med. high heat until some of the noodles start to brown.  Pour in the liquid and seasonings, stir until mixed, then bring the whole thing up to a boil.
Cover your pot with a lid and turn the heat down to medium-low heat, but make sure it is still simmering.  The original instructions recommend simmering for 15 minutes.  I did not find this enough time.  I think you need a good 20 minutes to keep the rice from being crunchy...Maybe even 25.  This second time of making the recipe I used more water and added 5 minutes over what I did the first time.  It was much more like the texture Rice-A-Roni should be.  I went ahead and added those changes into the recipe and instructions above.

So, if you are looking to eat a few less preservatives, need a yummy side-dish, or just have a few ingredients in your cupboard and have a family to feed, this recipe fits the bill!  Give it a try.  It might just become a favorite :0)