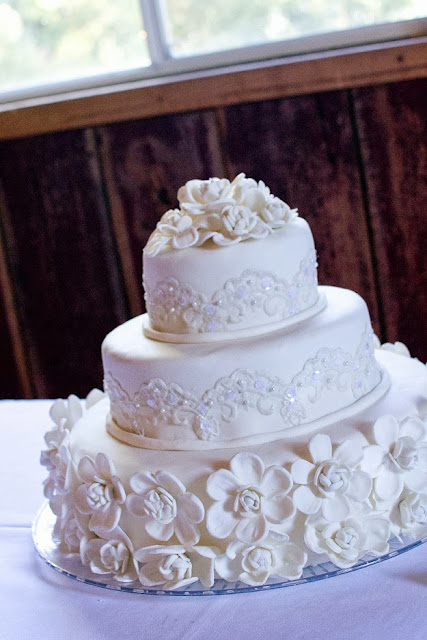 Hello!!!  I am finally back :0}
The wedding was a total success and I managed to get out of there without ruining my mascara!

I made it through the ceremony fine cause I was too worried about the cake to really think about my baby brother getting married.  After that I thought I was scotch free from tears until I caught sight of the slide show of so many baby pictures.  I am six years older than my little brother, and while I am not sure he remembers me taking care of him, I remember watching over him like he was my own little guy.  The slide show was just a primer though for the mother-son dance where the real waterworks began.

It finally dawned on me that the little guy, the one I played with in the wading pool and the kindergartner I dressed before school, the nerdy little book worm that always made me laugh with his crazy dry humor, that little kid was gone.  In his place was a grown man, pledging the rest of his life to the first girl I have ever seen him truly googly-eyed over.

What a sweet day. 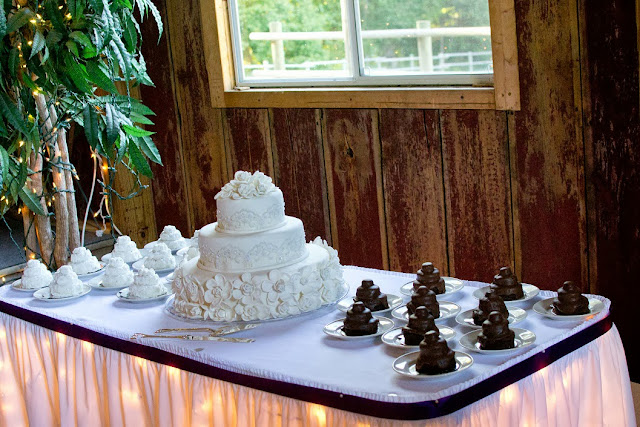 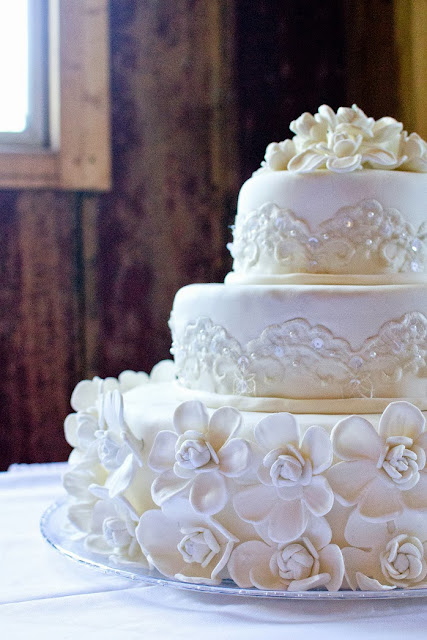 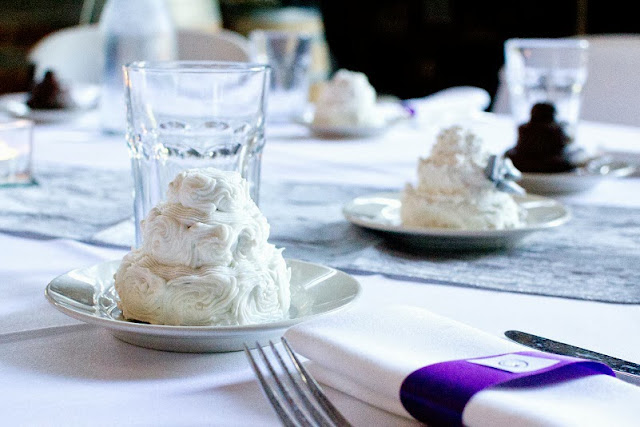 I spent an entire week baking and frosting 250 mini-three-tiered wedding cakes.  In all honestly, I didn't really think I could do it :0}  I was determined to die trying though.  The individual wedding cakes were pretty important to the bride, my new sister-in-law {LOvE IT!} so I just kept telling myself we HAD to make it happen. 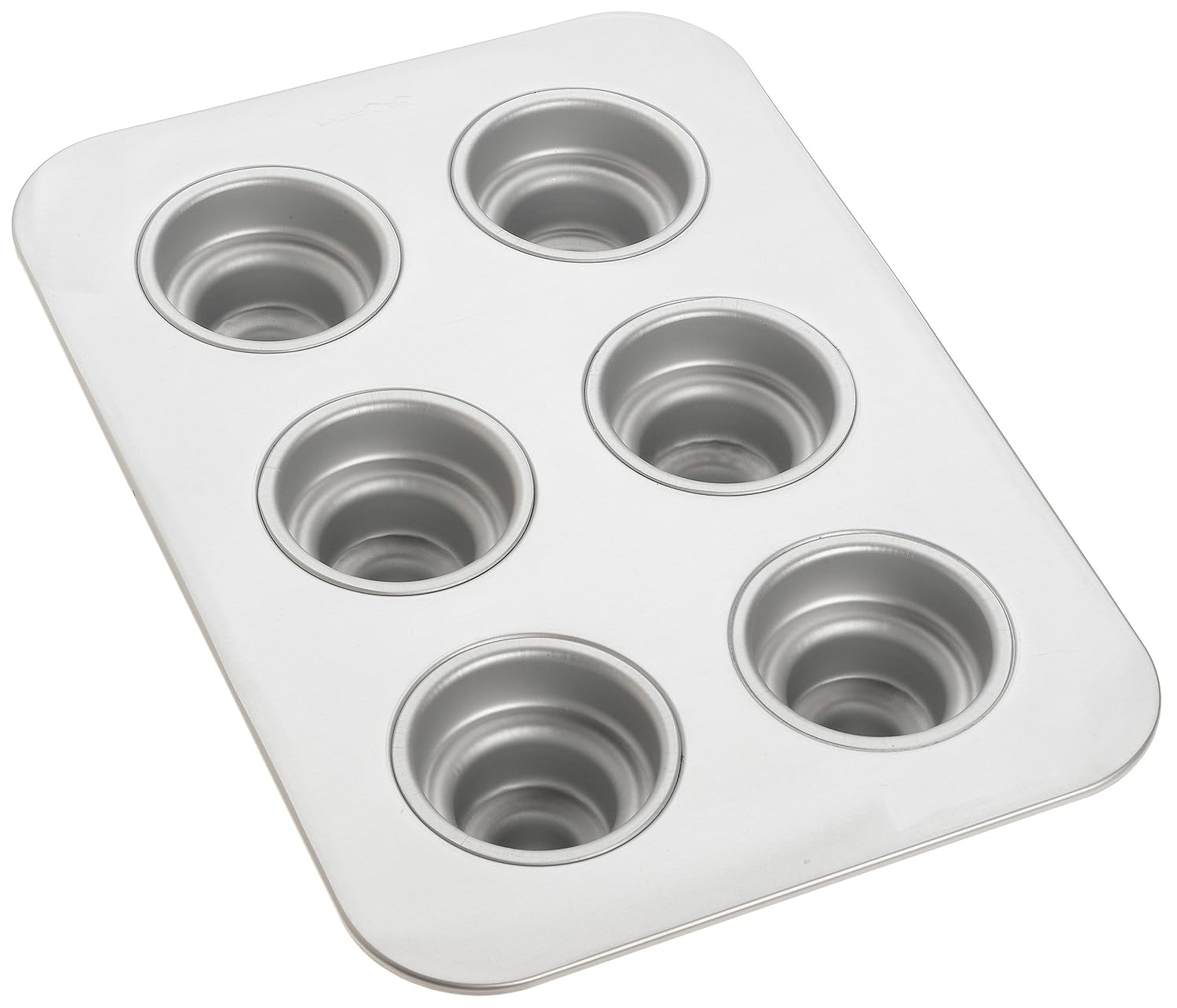 I purchased Fat Daddio's 6-Cup Individual 3 Tier cake pans on Amazon for $24 each.  At first I just bought one to make sure it would work and the cakes would come out OK, and then I went back and ordered three more.  In all honesty, with 250+ cakes to make, I wish I had ordered 6!

One cake mix made about 14 cakes.  I baked two pans at a time in the oven using my altered cake mix recipe and baking the cakes for 25 minutes at 325.  Over two days I think I made about 25 batches of 12 cakes, each baking for almost a half hour.  It literally drove me crazy.  Luckily a friend dropped by for about two hours and babysat the cake process so I could get a break and get some last minute wood cut, otherwise I don't know if I would have made it.

To fill the mini cakes, I just cut the bottom tier off, smeared on a Tablespoon or two of filling and replaced the removed portion of cake.  It worked like a charm.

Backing up to the baking portion again, it was torture.  If I could deter you from making any more than 12 of these darling little cakes I so would.  If you are crazy like me and decide you really must make these wedding cakes for all of your guests...first, tell yourself no...and if that doesn't work, email me.  I will try to talk you out of it :0}  Lastly, get ready for some labor.

With each batch, I would grease the pans {more on that later}, mix the batter, fill the pans, put them in the oven, take the finished set of cakes out of the other set of pans, cut any excess cake bump off the bottom so they would sit flat, dump them on a cooling rack, wash each and every tier of the three tier cake pans for every cake spot, then dry each and every layer, then grease each and every layer, then transfer the baked cakes to boxes for storage, and then fill the next set of cake pans and start all over again.  I think typically I had about three minutes between batches to sit while I waited for the timer to go off and getting up to start all over again.  NOT FUN! 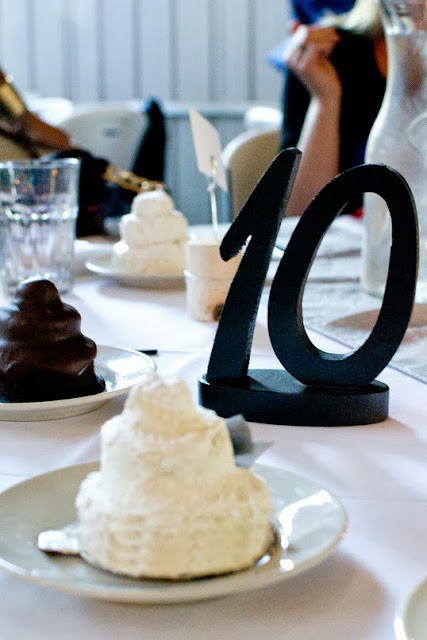 The next hurtle was frosting them.   I managed to round up three unsuspecting friends to come help frost as well as four family members to come intermittently through the first day of frosting.  We managed to get two flavors frosted in the first 12 hour day of frosting and filling.  The second day was just as long.  MORE TORTURE!  I made the vanilla and raspberry cake with squarish swirls, then pushed some edible pearls into the centers of the swirl to make it look fancy.  The almond cake was frosted in a messy style with a whipped frosting {delicious!}, and by the time I got around to the chocolate cakes I was totally tired of frosting!  Finally after a few failed attempts at different designs, I threw the towel in and ran to the store for the ganache ingredients.

We put the cakes on cardboard cake circles {ordered from HERE-the only place I could find them...make sure to get the circles with the tabs!!!}  You just put a dab of frosting on the cake board, then put your cake on top.  The frosting keeps the cake from sliding around during transport or while plating the cakes.  VERY IMPORTANT the frosting is. 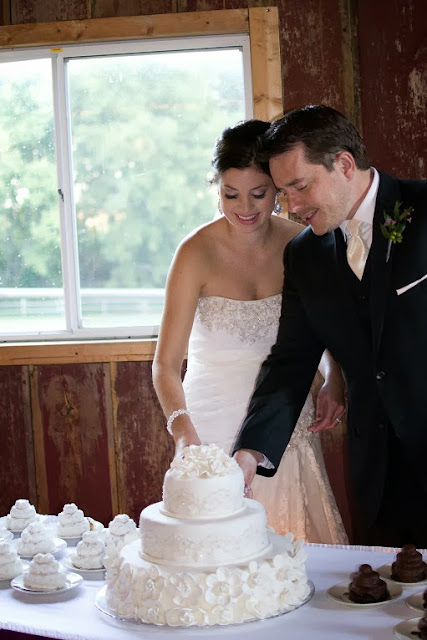 I think I have stayed up a little too late tonight getting these pictures on here, so I am certain I am leaving out important information.  Just be sure to comment below or email me if you have any questions.  I would be glad to share anything I know if it will help you out.

Oh yeah!  Frosting!  I bought some five gallon buckets of frosting from Sam's Club.  I have been told that Costco will sell theirs, but I haven't found a Costco that would sell it to me.  I bought a bucket of butter cream frosting and got about 100 mini-cakes filled and frosted {by piping on the frosting}.

That was my other point, don't try to frost these babies smooth.  My first test run of frosting 12 took about 2 hours to get the frosting smooth on all the layers of all the cakes like I would a big cake.  If I get a little time in the next week I will show you close up the best ways I found to frost these mini cakes. 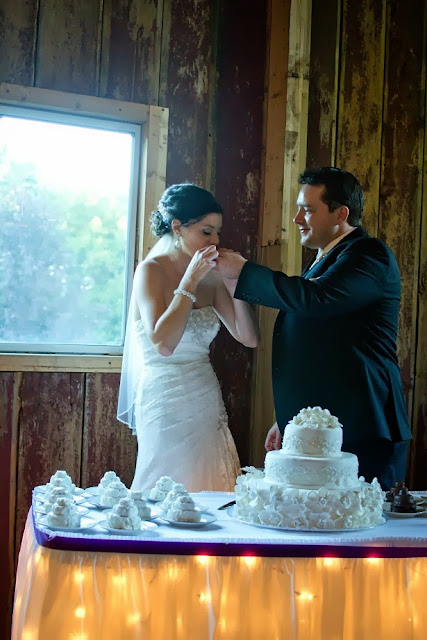 Anyway, no matter how much work the cakes were, I would do it all again for these two!  I love them both completely.  Little Brother did a great job picking a wife.

Can I tell you how it warms my heart to see my little brother with such a happy grin on his face.  Seriously.  Great.  There go the water works again!
I will be back soon with more wedding pics.
Have a great weekend :0}