Back To School {Finally!} 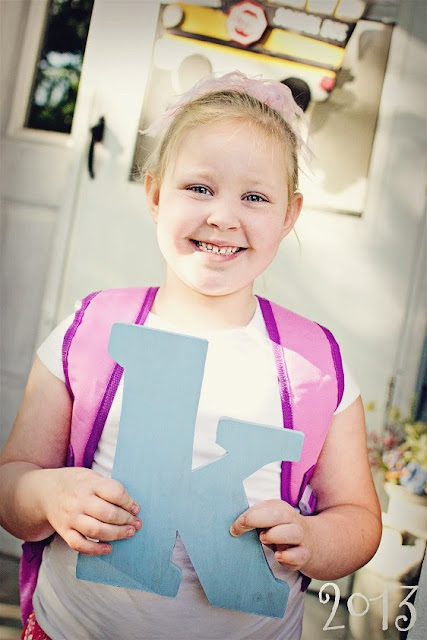 I hope you weren't as excited for school to start as I was!!!  Seriously, I am still partying inside.  My only real frustration with it is that my VERY, Very, VeRY busy kindergartener has afternoon kinder, so I spend 5 HOURS telling her it is too early to go out to the bus!!!  Heaven help me. 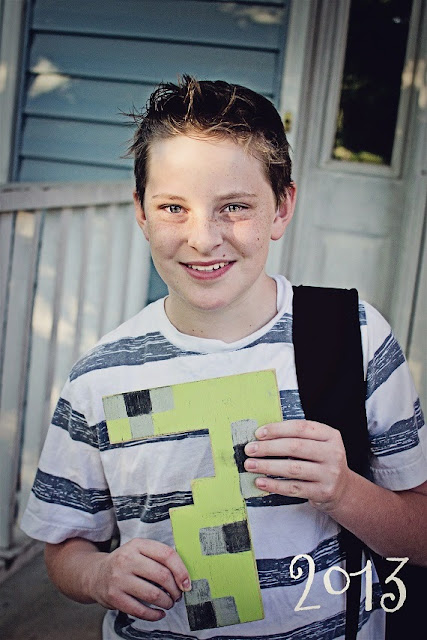 Eli is in 7th grade this year.  This was my best 5 minute attempt at a "minecraft" number 7.

This little blog post is just a blurp to let you know I am still at it, even if I am a little sparse on the blog lately.  Tuesday morning I woke up and realized I needed the numbers for the First Day of School pictures.  I printed out some numbers, ran out into the garage in my bare feet {not recommended}, and cut these bad boys out.  You won't hear it from me that my kids went to school with wet paint on their fingers, no sir!  As far as any of you know, I made these back in May when we finished the last school year :0}

Any of you that have read my madness here on The Sew*er, The Caker, The CopyCat Maker know that EVERYTHING that happens around here is well intended, but usually totally last minute.  Oh well, at least it gets done. 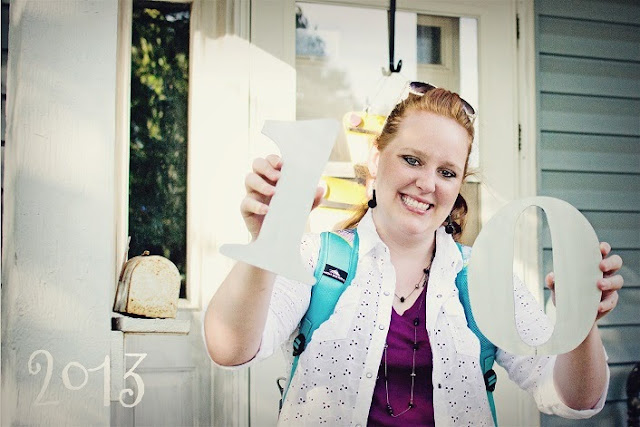 My Maddie girl.  She is in 10th grade.  Who ever said that was OK???  I don't remember signing that permission slip.  She should be the one in 7th, Eli in Kinder, and Emmers still a babe in my arms.

Waaaaaaaa.  That's right, I am crying over spilled milk.  Deal with it.  I wanted my kids busy again after our OH SO LONG summer of no friends {since we just moved here}, no money, and nowhere to go.  That doesn't mean I want them to grow up!

Anyway, my next back to school project was to make a bus number tag for Emmers.

I must say it is a little scary to drop your kindergartner off at the bus stop and just believe that your fabulous 5 year old will make it to school, in fact get OFF the bus, go to class, learn, find their right bus again, ride all the way home in safety, AND get off at the proper bus stop.  Yeah.  I was OK with it the first day because I snuck into the car, raced the bus to school, and took pictures of her getting off the bus.  Today was another story.  Talk about an increase in prayers :0} 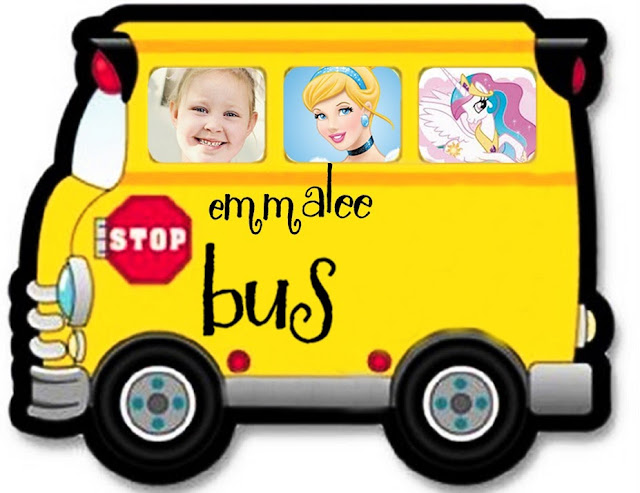 Now that you have heard THAT long thought, here is the bus tag.  I added her picture, Cinderellas {since they are practically the same person}, and her new favorite show, My Little Pony.  I added her full name and the bus number she is supposed to ride home.  I cropped them out of the picture for privacy's sake, but you get the idea.  This tag idea was not mine.  The teacher required it for the first day of school.  Apparently she has been doing this longer than I have.  What a fabulous idea!  I pulled out my little Scotch brand laminator {purchased at Walmart a few years ago} and laminator the little sucker.  A hole was then punched and I tied the tag to her bag. 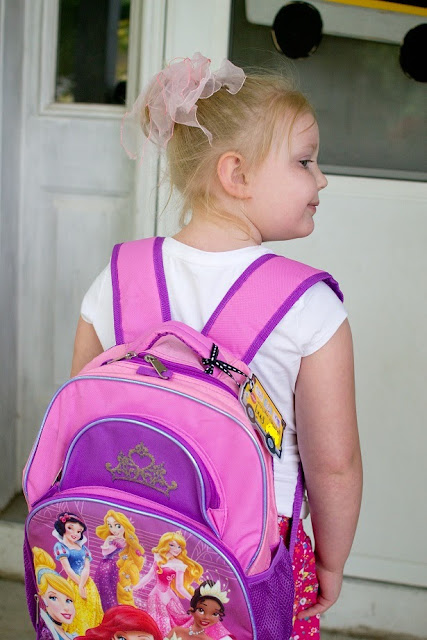 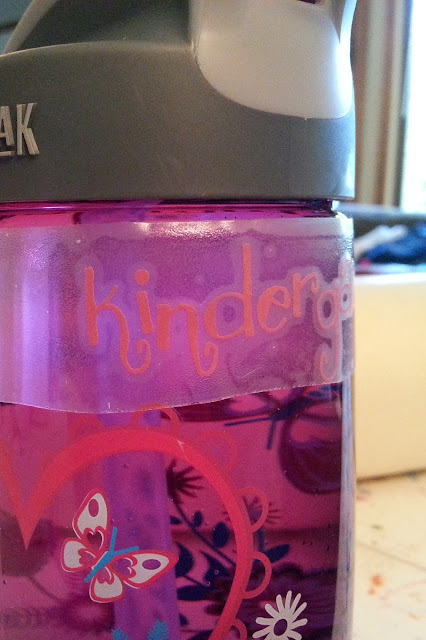 The next alteration I made was adding Emmalee's name and grade to her waterbottle.  After much lamentation at Target stewing over which water bottle to buy, I finally gave in and purchased the expensive Camelbak brand because it is supposed to be spill proof.  Madison has one and loves it, but they seem too expensive for a Kindergartner.    Anyway, I am hoping with the labels {and the same info in sharpie on the bottom} the bottle will never be lost.  Cross your fingers! 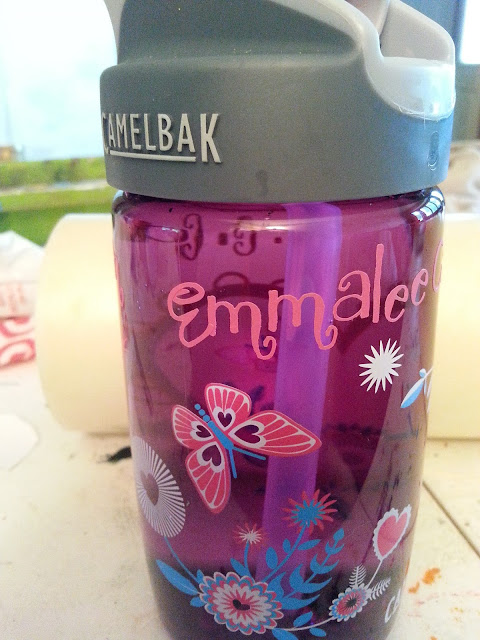 Love it!  With all that done, Emmers was ready for school. 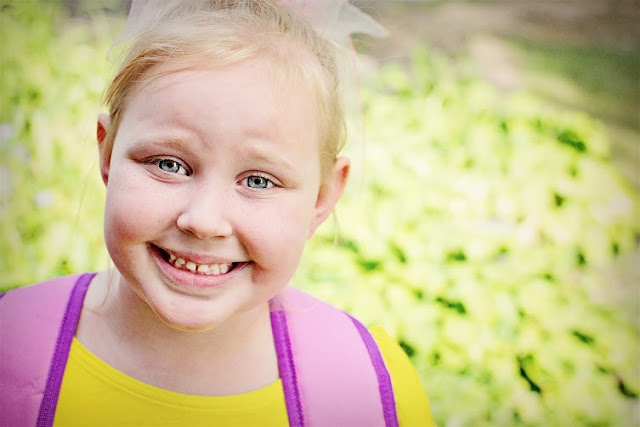 One quick snapshot on the way to the bus stop. 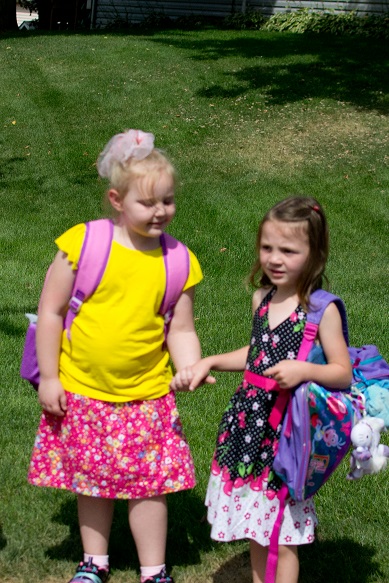 3.5 seconds later, Emmalee had a best friend.  AWESOME!  Can you say PLAYDATE!?!
Where were you all summer Best Friend???  {I asked Emms what her "best friend's" name was...she said, "I just call her best friend"} 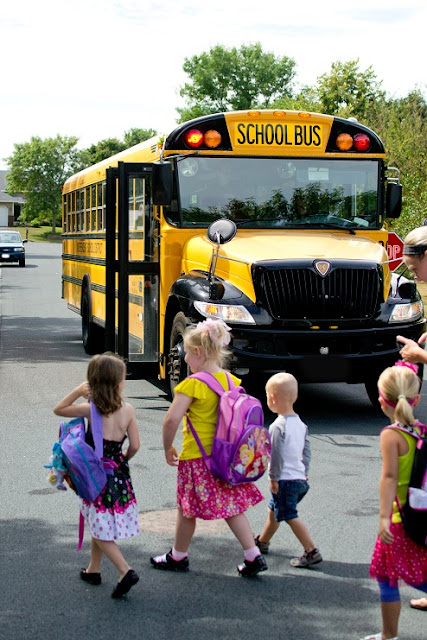 I hear that some kids are a little shy on their first day.  That sometimes they can be sad to leave Mom... 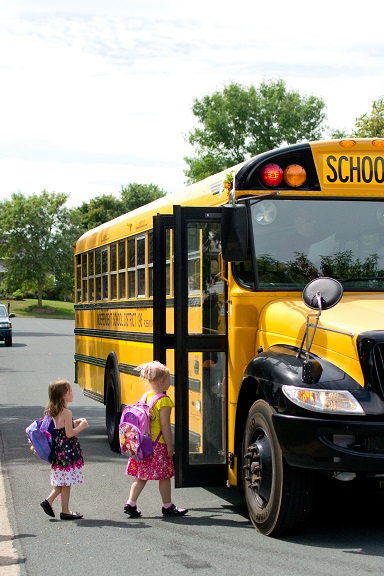 They might hold back and refuse to get on the bus all by their lonesome....and then there is Emmalee.  Leading the group to the door, first one to board. 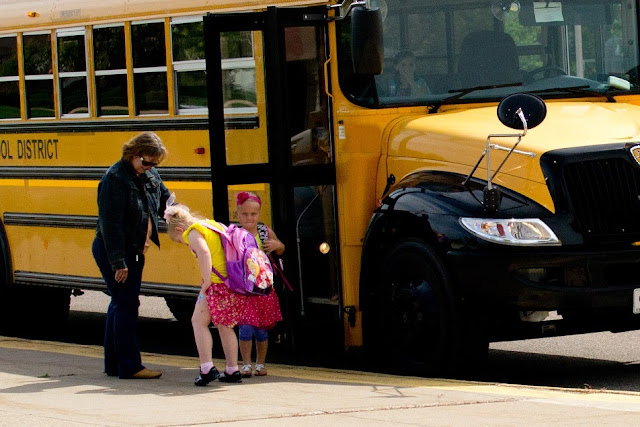 Once they got to school, Ems paused long enough to lift her skirt and show the bus driver her band-aids from shots :0} 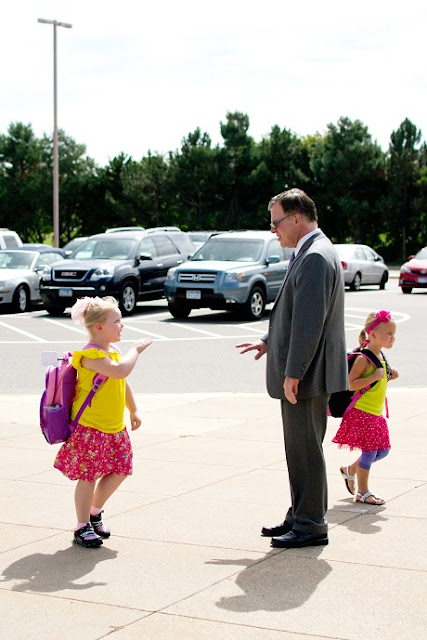 Next she walked right up to the principle and said hello and started a long conversation about going to Kindergarten, and how she got shots so she could go, and she rode a bus, and she has spinner shoes, and Cinderella is on her backpack, and she changed her name to Cinderella cause she is a princess, and Grandma took her to Disney World to see the princesses.... 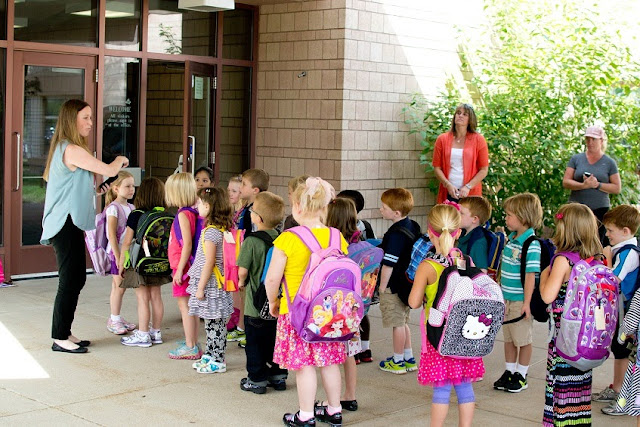 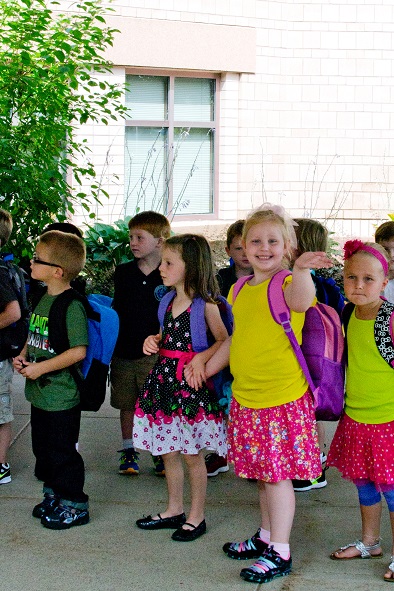 That is one busy Kindergartner!  Good luck teacher :0}  I will be excited to have her home tonight, but for now, Bye, gotta go!

I kinda thought I would cry, my baby and all, but no.  Just gotta get home and get something done before the monsters return.

So here is one project I have been working on... 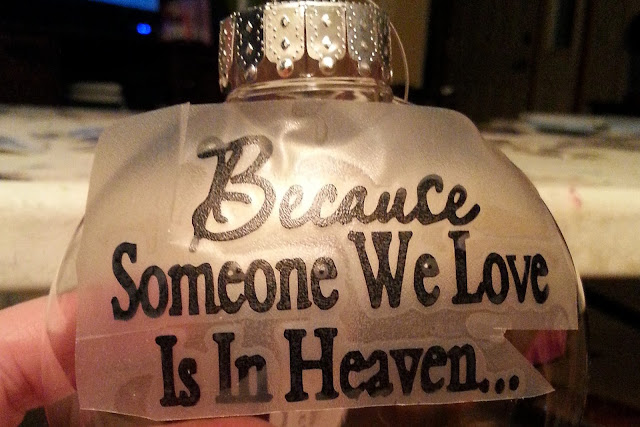 I have had many requests for new ornaments and this is a custom order I have been trying to get perfected.  The customer wanted the vinyl on the outside of the ornament at first.  I had never done that before so I had to try a couple.  This one was made with a rather flat ornament to make such a large saying possible on the outside. 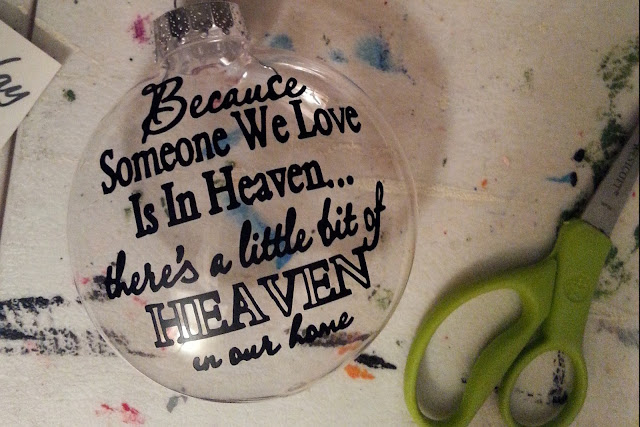 Now to figure out what to put inside.... 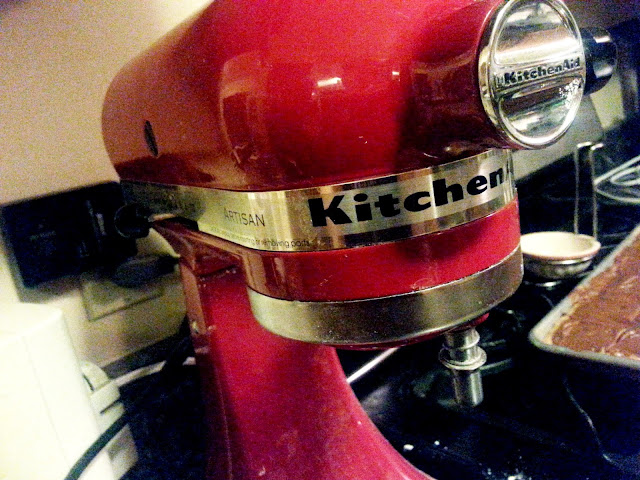 I have been putting my new gift, a Kitchen Aid, to good use.  My poor Eli has had a rough couple days of school so I made him a pan of our favorite Peanut Butter Bars to cheer him up.

Just in case you want it, here it is!  It comes out of a Halloween Taste of Home magazine I have from YEARS ago.  It is stuck open to this page cause that is the reason we keep it around.

In a mixing bowl, cream butter and sugars.  Add peanut butter, egg and vanilla; mix well.  combine oats, flour, baking soda and salt; add to the creamed mixture.  Spread into a greased 15x10 inch baking pan.  Bake at 350 for 15 minutes or until slightly golden brown.  Cool slightly on a wire rack for about 12 minutes.  Spread with 1 1/2 cups peanut butter {it will spread better if you heat the peanut butter up in the microwave for 30 seconds or so}.  Cool completely. 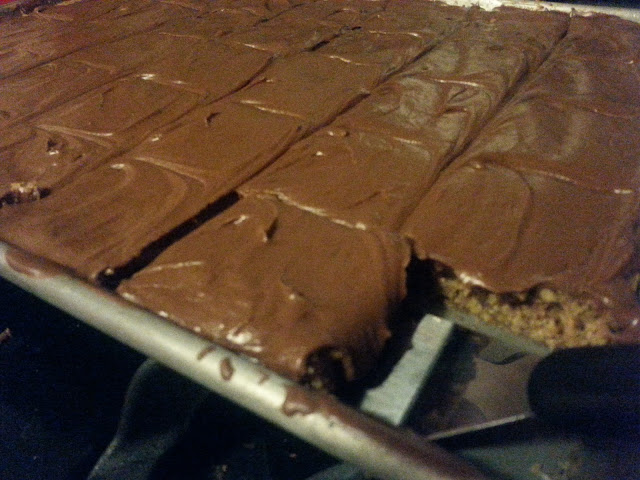 I forgot and put the whole batch of frosting on the bars.  I recommend maybe using only half?  I like to taste more peanut butter than frosting.  Also, I like to use regular oats, cause I like the texture over quick oats, but you can use any kind you have.  After that, the biggest advise I can give you is don't over-bake the bars.  They are really fabulous any way you make them though.  I promise!!!

The last thing I made today for the whole Back to School thing was a couple of fabric book covers. 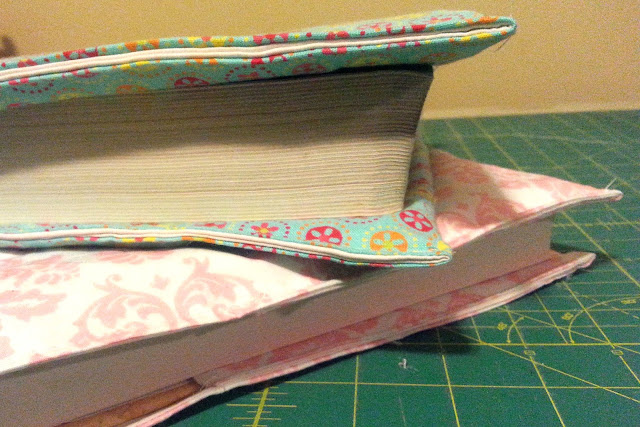 Madison came home and said she had to cover her books.  She had the idea to cover them in fabric instead of paper bags like they suggested at school.  At first I thought they may not be protected as well, but after making these, they are just as thick and protective as a paper book cover.  Plus, you can take them off and throw them in the washing machine! 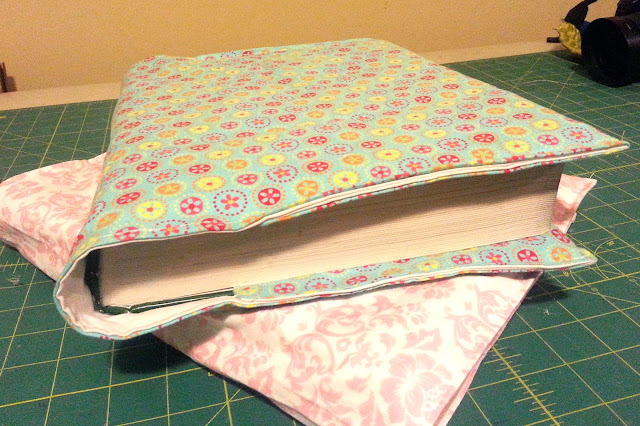 Basically, I measured her books around the outside, then added 5" for the inside the front cover and 5" for inside the back cover.  That gave me a length of 32".  I cut a top fabric to the height of the book, plus 1" for seam allowance and to make sure it fit over the thick cover, then 32" long.  I also cut a piece from a bed sheet the same size.  I sewed the outer fabric to the sheet fabric all the way around the rectangle, just leaving a couple inches open for turning the project right side out.  Once the corners were clipped and the cover was turned right side out, I top stitched along the two shorter sides, folded the ends in the 5", then sewed a straight line across the bottom and top of the book covers. 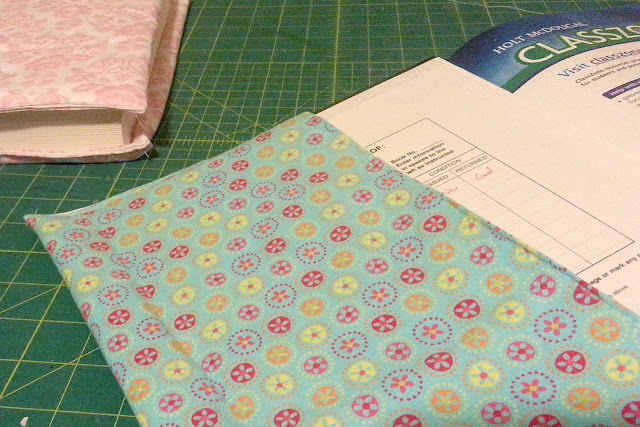 They turned out pretty cute.  Her classmates are gonna think she is crazy, but Madison is used to that.  She LOVES fabric, just like her momma.  She uses it whenever she can :0}  Her new friends will find that out soon enough.

Now, I guess I better go to bed.  It will be school time again in just a couple hours.  Coming up soon, I will show you the flower girl dresses I have been working on.  They are ivory and lacy and lovely!  Be sure to come back to see those.  Also, it is wedding month.  I have giant lace balls, wood signs, cakes galore, and many other projects ahead of me.  Plus, I think I almost have my new Nativity Ornaments ready!!!  I will be back with those soon too.  Have a great night!

Email ThisBlogThis!Share to TwitterShare to FacebookShare to Pinterest
Labels: Back to School, Recipes, Teen, Vinyl