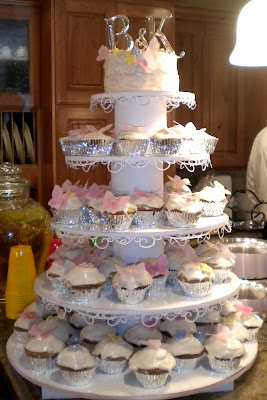 I made this CupCake Cake Stand for my little sister's wedding last month...or was it this month...My brain has left me for a more sane woman.  Anyhow, here is how I made it. 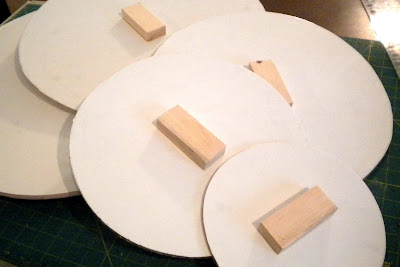 I cut circles out of 1/4" hardboard on my scroll saw.  I ended up using two 2x4' sheets @ $5 each.  You can use plywood, cardboard or even foam core if you want.  If you do chose cardboard, I would double the layers for sturdiness.
Do you know how to draw whatever sized circle you want?  Here is an example of how I do it...
Lets say I am making the bottom plate, a 20" circle.  Because I want my bottom circle to be 20",  I mark 10" (half of 20) over from the side of the board and 10" from the bottom of the plywood board. The point where these two lines intersect is now my center dot.  I tie a string to a pencil or nail or something and make my slave-labor daughter hold it on the dot.  Next, I tie the other end of the string to another pencil.  I made sure the lead of that pencil measures out 10" from the center dot when the string is pulled tight.  Then, I carefully draw in a wide circular motion, keeping the string pulled tight.  *You do have to keep an eye on the string, making sure it stays at the same height on both pencils and that both pencils are standing straight up and down as you draw around your circle*  It is pretty cool to see how well this method can work at making whatever sized circle you need.
Moving on...
Looking at other people's stands, I really felt like the stands ended up too steep when the circles were only 2" bigger than each other as you go down the cake stand.   When I do cakes, I usually step down 4".  However, I was worried the thing would end up too wide at the bottom so I chose the middle road and made my circles in 3" steps.  Planning to use a 6" cake on the top, I made the first plate 8", the next 11", 14", 17", and the last one 20". 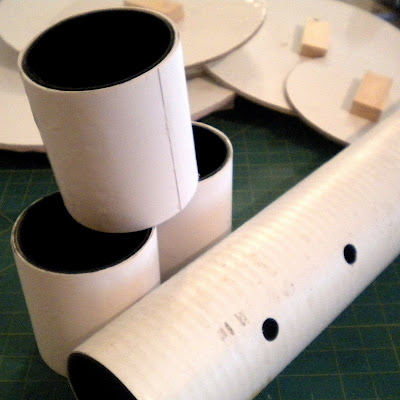 For the columns, I chose to use this plastic pipe I found at Home Depot.  It came in a 10 foot long piece for about $8.  I only used 2 feet for this project, so I guess you could say that the columns cost less than $2 :0)
My husband would not agree with my logic...but we won't go there.
This pipe stuff is really cool because, while it is found in the same section as PVC pipe, it is much lighter and less dense.  It cuts much more easily.  I really equate it to a plastic version of cardboard.  I used my miter saw to cut this pipe, but it should be fairly easy to cut with a hand saw.
I ended up cutting my columns 5" tall.  I wanted plenty of room for the cupcakes and any decorations on top of them, plus the lacy decoration that would be hanging from the plates themselves. 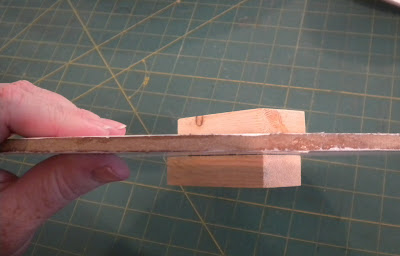 I thought a long time about how to assemble the cake stand.  I wanted to be able to take the huge thing apart to store it or travel with it, but also wanted it to be very sturdy.  Making cakes is nerve racking enough without worrying about the stand falling apart or slipping to the floor!
I finally decided to glue these blocks to the center.  I put one on top and one on the bottom.  I explained to my kids that I did it this way so the whole thing would work like LEGOs. 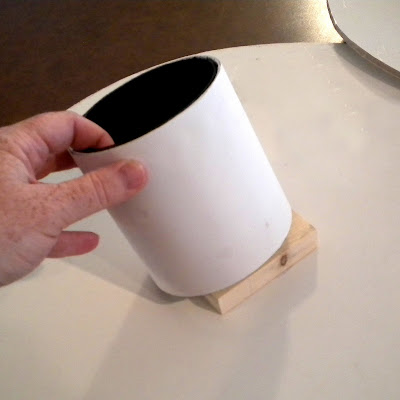 The blocks are just the right length to fit snug inside the pipe, just tall enough that if the stand were bumped upward the plates would not come off. 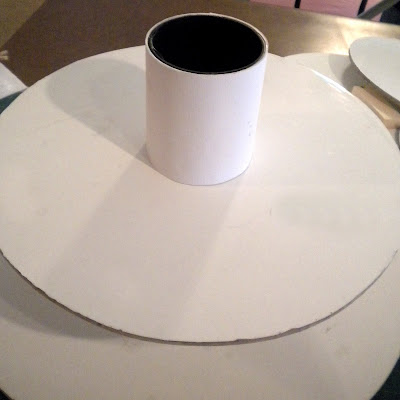 The next step is to decorate the cake stand.  I went in search of white contact paper to cover the plates.  I went everywhere but Walmart.  I should have gone there first.  None of the stores I went to carried contact paper.  I finally found white glossy wrapping paper at Hobby Lobby.  I modge podged it on.  Time was running out swiftly so I skipped the top coat.  Bad Idea!  The cupcakes left little stains all over the paper.  I will have to take it all off or maybe just layer over the top of it now to hide the stains.  Maybe I will still hit Wally World for that white contact paper anyway :0)  I went with white on the plates so I could use the stand for whatever event I wanted.  I modge podged scrapbook paper around the pipes/columns.  Now I think I should have used wrapping paper for that too to cut down on the seams.  I was thinking I could change the paper for the specific events: blue for baby boy showers, pink for baby girl, primary colors for birthday parties, etc.  I guess I could just cut new columns with all that pipe I have left over and have several sets to choose from:0) 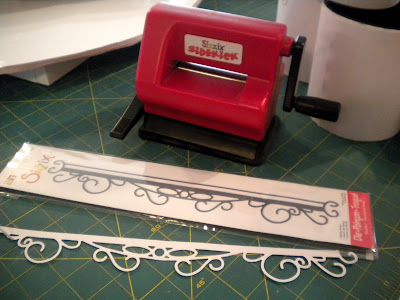 I wanted a very elegant, yet whimsical look to the cake so I cut these lace patterns out with my Sizzix Sidekick.  I used double sided tape around the edge of the plates to stick a light pink ribbon to the sides.  After that, I hot glued the paper to the ribbon.  The nice thing about the double sided tape was that when we got home I could rip the tape off very easily.  Now I can tape on any new ribbon to match my next theme, like "Bunco".  I wonder if they sell ribbon with little Dice on it... :0) 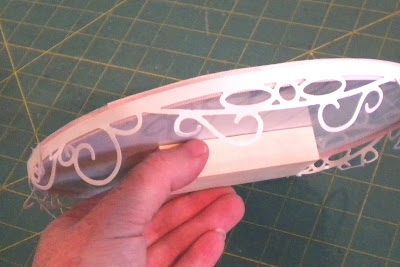 Here is a closer look at the lace before I ripped it off.  I wish I could think of a material for that trim that would hold up and be interchangeable.  It isn't that this paper didn't do it's job, but I had to glue it on when we got there and it got munched up in the car ride home.  I guess you could put velcro or something like that around the rim and use real lace.  That could be an option.
You actually wouldn't believe how I went about putting the ribbon on.  We hit 4:30 Friday, leaving for our 12 hour car drive in less than an hour, and I had just modge podged the paper on.  I took all the plates and put them on top of our luggage in the back of the Tahoe.  As we drove, I had Eli pass a plate up to me in the front seat.  I would cut the excess paper off around the edge of the plate, then apply the double sided tape and pink ribbon.  When I was done, I would pass the plate back to Eli and have him pass me the next one.  I am sure the Labor Day Travelers sharing the road with us had a hard time figuring out what on earth I was doing!  I got it done though, right?  Had I done it at home I probably would have hot glued and been stuck with my pink ribbon.  Now I have options :0) 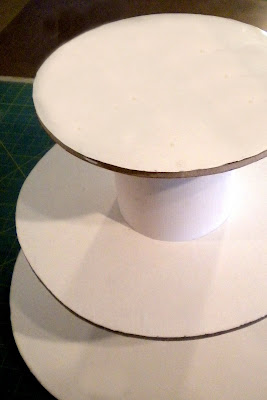 I only put one block on the bottom of the top plate.  That way it is clear on top for whatever cake or topper I want to use in the future.
That is the gist of how I made my CupCake Cake Stand.  It cost me less than $20 to make and came together in only a couple of hours ('cause that was all I had).  It should be great to have for whatever baby/bridal shower, birthday party, or other kind of occasion that pops up out of nowhere and store with the best of them in the closet between gigs :0)

This project is linked up HERE: