They're Back! Kitchen Towels!!!

They are BACK!!! Hanging kitchen towels, Halloween Style! 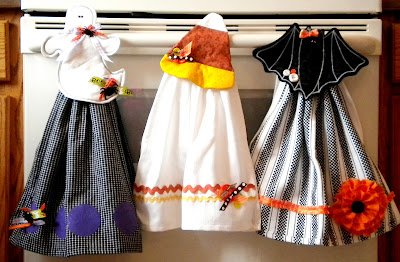 I made three different towels to spruce up the kitchen. I started on them a week ago, but finally finished today!!! I went for more frilly than the original CupCake Towels, but who can really argue with frilly? 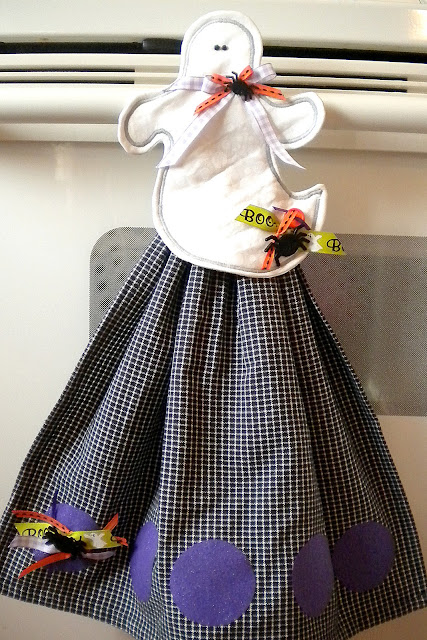 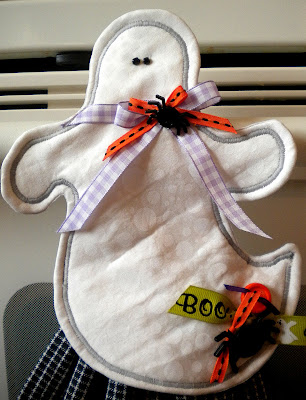 I stitched around his body, not with an embroidery machine, but with my very low budget Singer.  Set your machine to zigzag and make the stitch length very small, like 1, and the width at a 2 or 3.  If it isn’t taking your machine FOREVER, you don’t have the stitch length small enough.  If your zigzag is skipping stitches, change the needle.  It is the wonder drug for sewing machines!
I hand stitched the buttons for the eyes, decorations and some of the ribbons.  If I could get away with machine sewing, I did that.
Don’t you just LOVE the spider buttons!?! I found a bag of them at Joanns a few days ago and LOVE THEM!!! 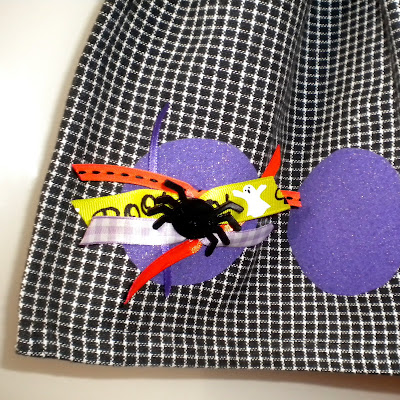 I went for more decorations on the towels this time.  Last month I read some rave reviews about “Steam-a-Seam” interfacing.  I ordered it online (then found it at Joanns while I was waiting for it to arrive by mail).  Their claim is that you do not need to sew around it!  Heat n’ Bond makes the same claim, but it sooo doesn’t work.  I still stitch.  I thought now was a great time to test that claim by Steam-a-Seam, I ironed those purple circles on without stitching around the edge.  I will let you know how that one turned out.


The second delight trailing down the kitchen towel catwalk…Mr. CandyCorn! 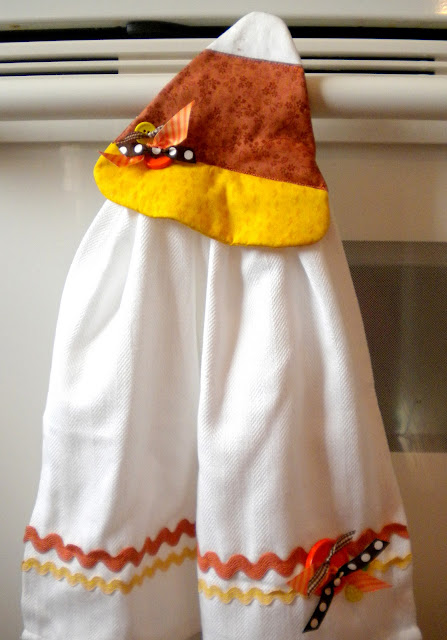 Sadly, this was the first towel of the season and it took a little hit due to my poor memory.  I didn’t re-look at the tutorial for the CupCake Towel and apparently forgot a few things over the last few months.  I stitched Mr. CandyCorn to the towel before I remembered I was supposed to zigzag over the top :0)
Then, I tried to tilt the poor guy.  I don’t think it worked out.  He needed to be slanted a little more, or just left straight.  Whatever!  I still love him!!! 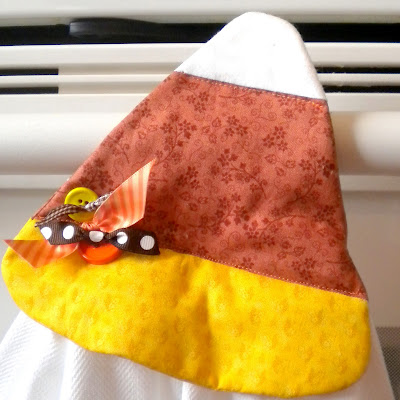 I went for the rick-rack with this towel.  I am an absolute SUCKER for RICK-RACK!!!  I threw that green button in there to throw things off a little.  I was told by an artist once that things look better to the eye when something throws it off a little.  It draws the eye to the artwork.  Kitchen towels can be artwork too, right?  A little stitching or accessory in a different color does the trick!
Who woulda’ knew!?! 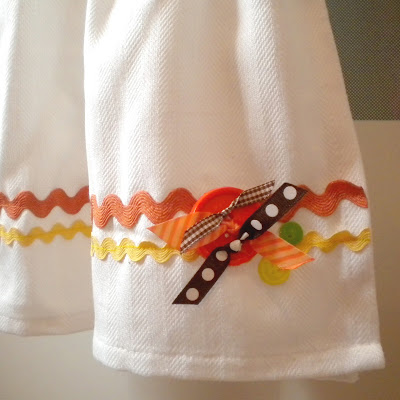 Finally we have Mr. Bat… 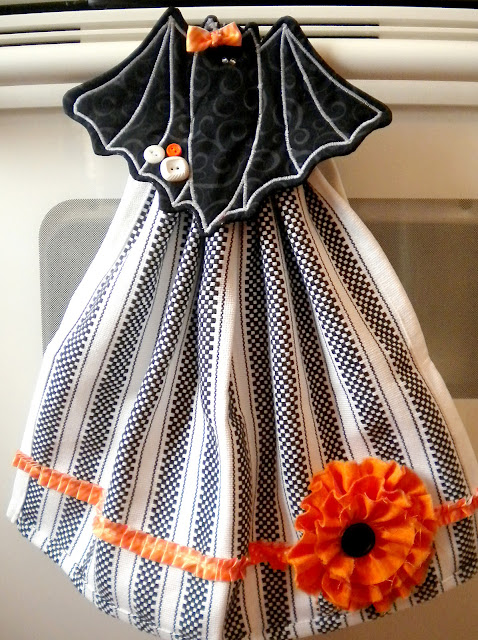 Oh, I guess Mrs. Bat :0) She was tricky to sew around, but obviously well worth the frustration!
I wanted to keep this towel only the two colors... for no particular reason.
I kept the decorating on the bat a little more simple, but… 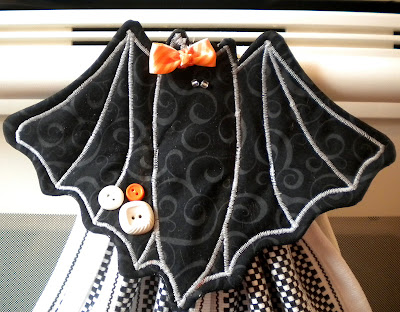 Went a little crazy on the towel!  I used the ruffler foot on my sewing machine to sew a pleated ribbon along the bottom, then ruffled some scrap fabric for the fabric flower.  I just can’t stand how CUTE that flower is! 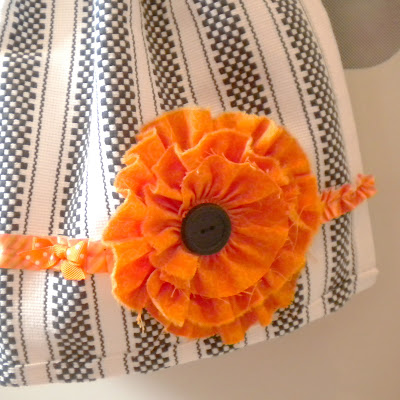 Here is how she looks on my dirty stove. With less time and WAY less energy this time around the photographing-the-towels thing, I opted for lower pictures to avoid having to clean my stove :0)
Disregard the disaster, my kitchen never changes :0) 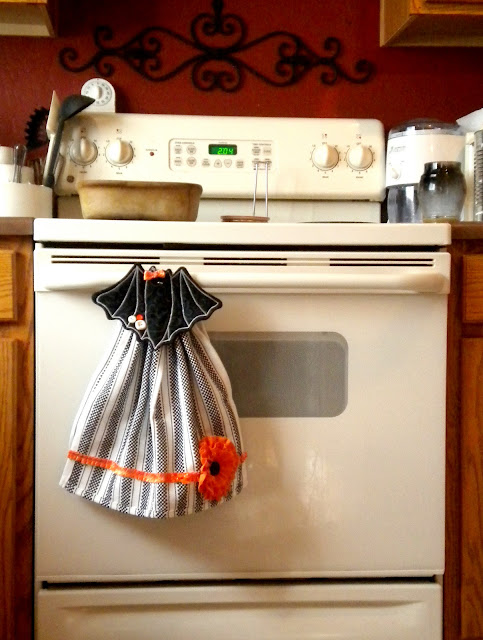 I hope you enjoyed my Halloween towels.  Want to make some of your own?  Click on the link to my CupCake Towel tutorial, grab some fabric, and run!

This project was linked up HERE: