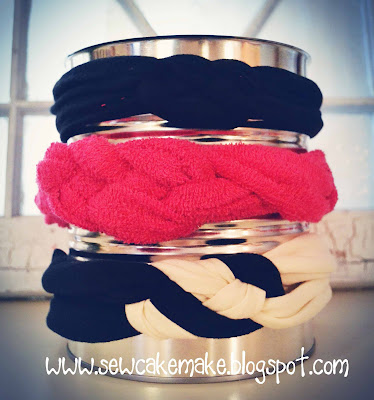 I painfully started back at the gym after I cut my hair over our summer vacation.  It was a new challenge every morning trying to tame my wild locks so that I could sweat them flat at the gym.  I think I ended up with pigtails the first day, a series of clips the second.  What I really wanted was a good old fashion sweatband headband. 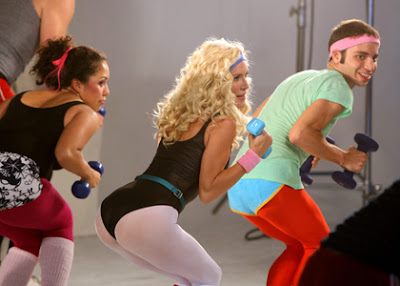 {source}
I really did envision the headbands from the 80's, which lead to horrifying memories of knee-high tube socks and barely there shorts...and then the leotards my mom used to wear to her aerobics class.  Sorry Mom, they were hideous!
Anyway, I saw these bracelets on CuteAsAFox 's pinterest board a few weeks ago and thought they would  be super cute as headbands. 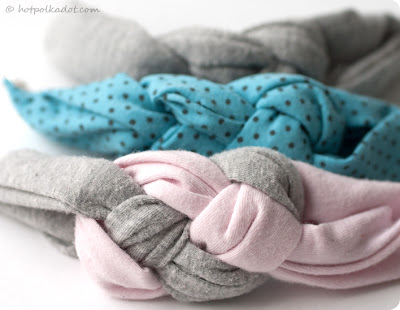 {source}
As you can see, a few weeks have passed and I have done nothing to produce headbands.  It wasn't until I spend this afternoon out at 110 humid degrees that I finally felt motivated.  I ran right home and pulled out my old t-shirts to get started.  However, I had a little trouble following the tutorial.  It was sad cause these are so incredibly easy to make...and cheep!  That was when I decided to make a tutorial of my own. 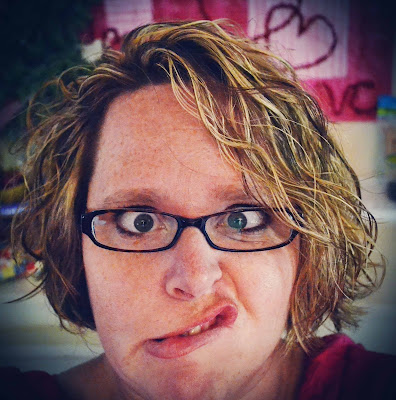 My hair has been in my face all day and driving me CrAzY!  Let's make those headbands! 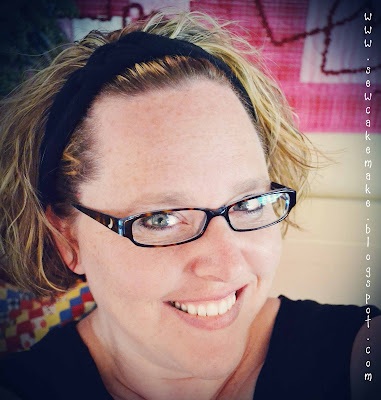 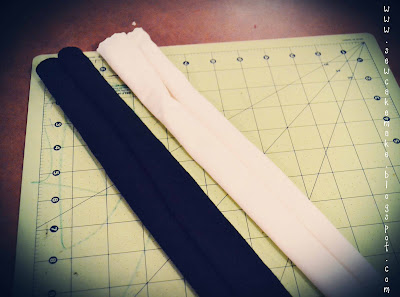 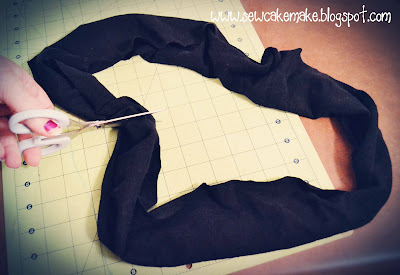 You will end up with a complete circle and will need to cut the strip to be able to lay it out flat. 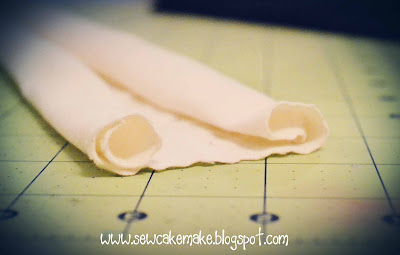 Next, you need the long edges to curl to the inside so that no raw edges stick out.  Knit is awesome for this.  You just grab one end of the strip with each hand and pull.  A good piece of knit will just curl inward and you are ready to go.  I also made my 80's headband- out of terrycloth {the pink one down at the bottom}.  The terry cloth would not stay folded in, so I had to sew the long-sides together and turn it right sides out.  I shouldn't tell you that though, since the tutorial is for a "No-Sew Headband" :0)

OK, so we have the two strips of 6" wide, however long the t-shirt made them.  Lay them down on the counter with about 12-18" just sitting there, totally stationary, never to be touched again...at least until the end. 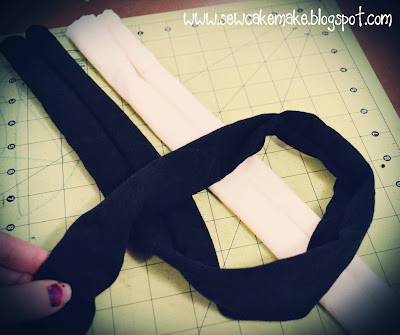 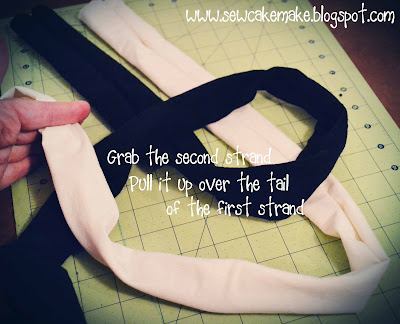 Now take the moving end of the white strand, pull it over and lay it on top of the black strand you just put down.  Let go of it and stand back.  This is where I was lost in the other tutorial. 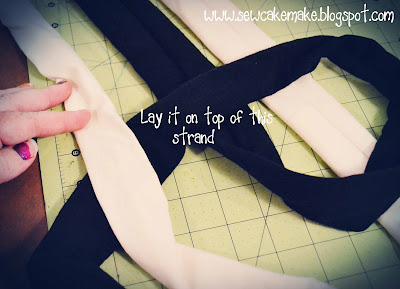 From here on out we are just taking this white strand over and under the spaghetti bowl of knit lying there on the table.  Right now the white tail is over the mobile black tail. 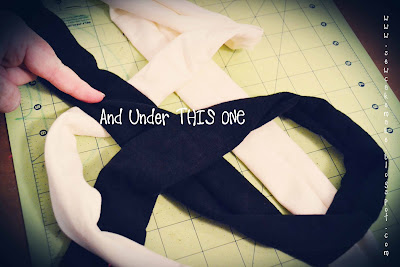 Now weave that white strand under the stationary black strand that I told you never to move. 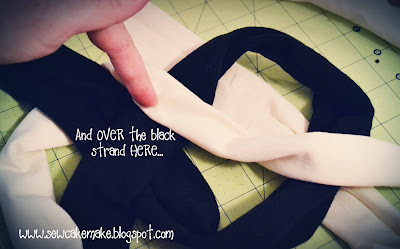 Take that same white strand end and lace it over the black strand where my finger is in this photo. 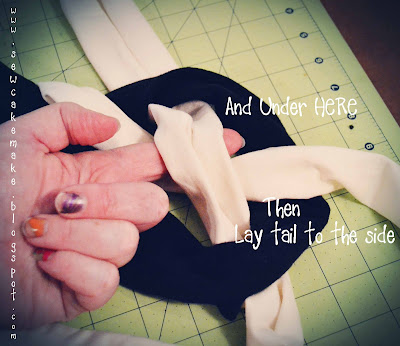 Weave the same white tail under the stationary white strand end you were never to move, then lay it on top of the final black strand loop. 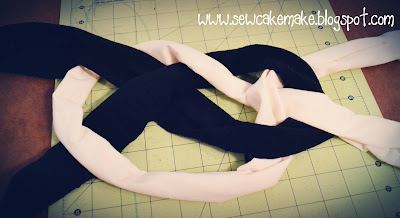 Here is what it will look like.  You can see a black loop and a white loop, their own tails crossing over each other.
Notice that the two white tails are together on one side and the two black tails are together on the other.  This surprised me.  I thought I would end up with one black and one white on each side, but no. 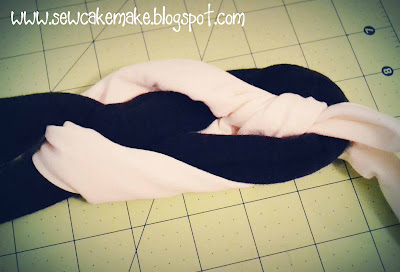 Now, the crazy part, pull the tails so that the knot tightens.  As you can see, it doesn't look like much.  You have to pull a little, fix the folds, pull a little more.  Even out the tension on each strand.  Really, this is easy and despite the stress of figuring out the folds, it is totally worth finishing! 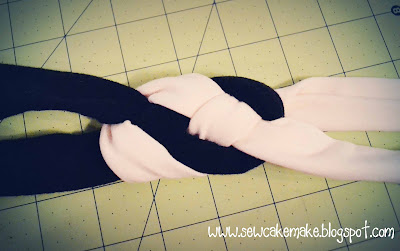 After a little straightening, you should have a knot like this. 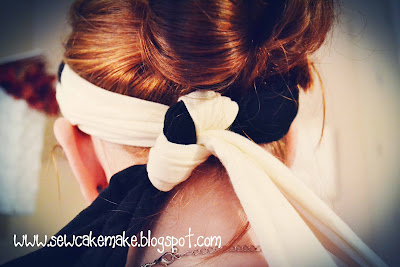 To make it a headband, a No-Sew Headband, I just double knotted it, took it off my head away from precious hairs, and cut the tails off with my snazzy scissors. 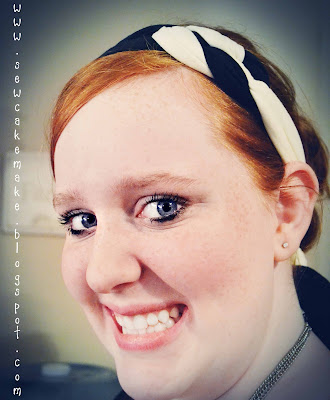 Madison thought me a crazy woman {I hate to tell her she is right}, but she LOVED the headband!  In face, she is insisting we make more at this very moment :0) 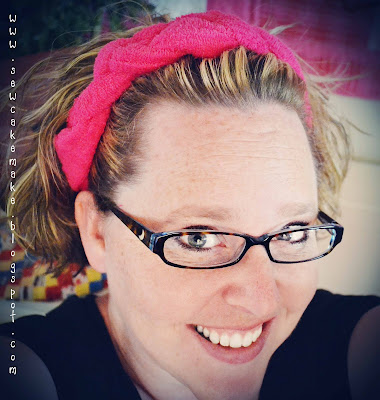 Here is my terry cloth band.  You can either just let the tails lie, or twist them a little an..dare I say...stitch them down...or use glue.  Whatever you want :0)

Can't wait to make more!  I see a new hair trend this miserably hot summer at the Sew*CakeMaker house :0)