Man-ups: Dress-ups for real boys Men!
You can't really call these dress-ups, because they are for boys!!!  That is why we decided to call them Man-ups.  No hidden requests intended :0)
After little Chase-y had to wear pink princess gowns for the thousandth time, I decided he needed his own dress-ups.  I took a little trip to Goodwill and found a tux shirt, dress pants {and a few other outfits} that would make a lovely addition to our dress-up closet {rubber-made tote}. 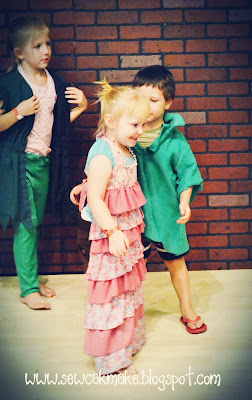 While playing at the Discovery Gateway {Children's Museum} in Salt Lake City I was totally impressed by this dress-up apron.  It was a full dress from the front, complete with pearls sewn to the neckline, but it was an apron from behind.  I thought my hubby would sing praises if he saw it because he is the world's biggest not-fan of dress-ups.  Why, you ask?  It is totally because of the un-dress part that occurs before the up-dressing part.  He hates kids stripping down in the living room to put on dress-up clothes.  I was thinking if the dress-ups were aprons, we would have a few more kids with clothes under their costumes. 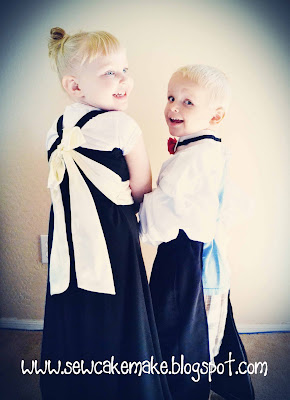 Here is a behind shot of my Boy-ish Evening Wear...I was going to make Emmalee's dress an apron too, but decide why go to the extra labor when it worked just the way it was.
Not that making these is labor.  In fact, I feel silly showing this project because it was so very simple. 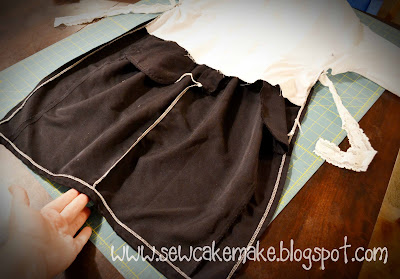 I took the pants and the shirt and cut them right up the middle of the back.  The pants, when I first cut them, I slit straight up the middle-back of each leg.  I laid the pants out, folded them so the crotch/inseam looked like it would if someone were wearing the pants, then pinned it in place and ran a stitch down the inseam.  I hope that makes sense.
You can see my terrible white serging.  I just realized that the thread was white.  Oh well, I guess that makes it easier for you to see, right?  I came back and cut the pants just wide enough that they wrap around the back of the child.  I didn't want them to be a straight flap, but actually look like clothes that were being worn. 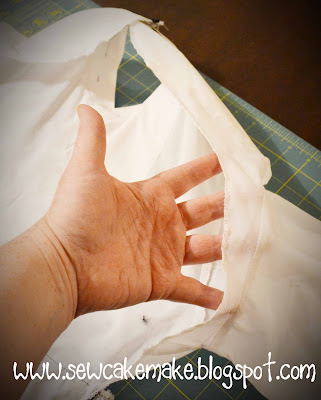 For the shirt, I cut it similarly, so that it wrapped around the back of the child when tied, but I left the arms intact.  I left a flap of fabric behind the shoulders to help keep the sleeves where they need to be.  The flap got wider as it went closer to the collar. 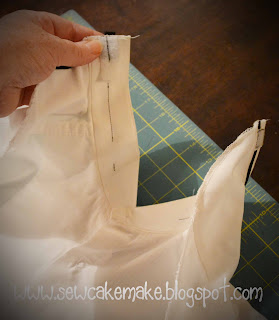 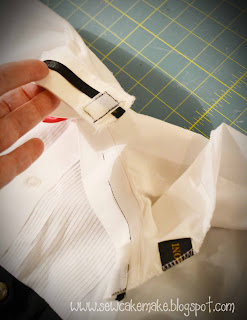 The collar is cut right in the middle of the back.  I serged the whole apron edge starting at the collar, down the side, across the bottom, up the other side, and ending at the other side of the collar.  I made a little bow tie and sewed that to the collar, then stitched on the velcro.  Finally ready to ParTy! 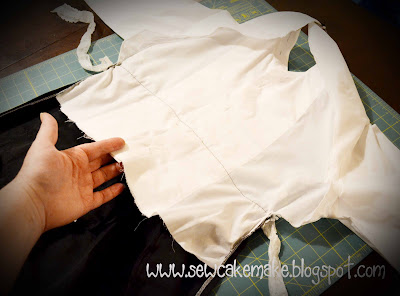 Oh, did I mention that I sewed the shirt to the pants?  I have been interrupted 60 times now so forgive my scattered thoughts :0)  I pinned the shirt to the pants and sewed along the top edge of the waistband to secure the outfit together....then I serged the whole thing!  After that I sewed a ribbon to each side of the waistband so the apron could be tied around back. 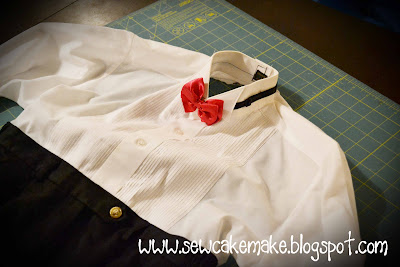 Here is the finished product.  I was going to sew a cumber-bun on there too, but it was very, Very late at night and I needed to do just one more project before Emmalee's party the next day.  I have that cumber-bun on my to-do list...the one that never gets looked at :0) 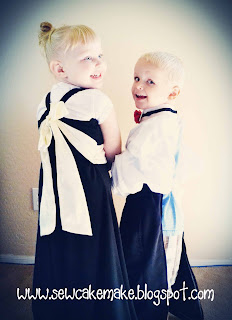 Here you go, front and back shots.  Love IT! 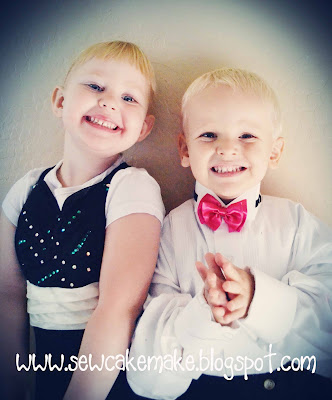 The kids loved it too. 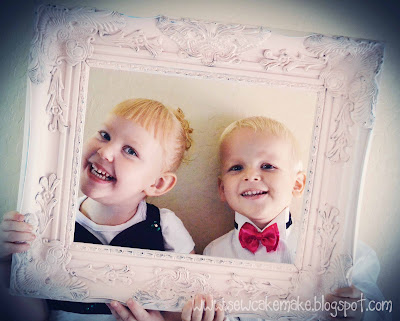 Got a couple cute shots all dressed up, then Chase insisted I take the "Man-ups" off and he ran straight for the pink princess dresses.  Oh Well!  You can't say I didn't try. 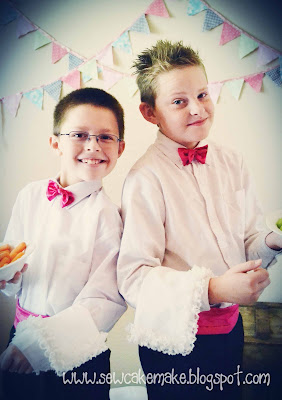 Here are the other things I had to make that night.  Eli was asked to be a waiter for the Tea Party.  He had to invite his friend, and then he insisted that I make bow ties and cumber-buns for both of them.  Really...Eli made me make them.  Even when I showed him the hot pink satin I picked out, he was jumping up and down with joy that I was going to make the sets for him and his friend.  They turned out well enough, even considering the hour at which they were made.
One of these days I will finish the other two outfits I have planned and show them to you.  One is a football outfit and the other a day-at-the-beach outfit.  I am sure Chase just can't wait :0}