Hat's Off to Mini Hats! 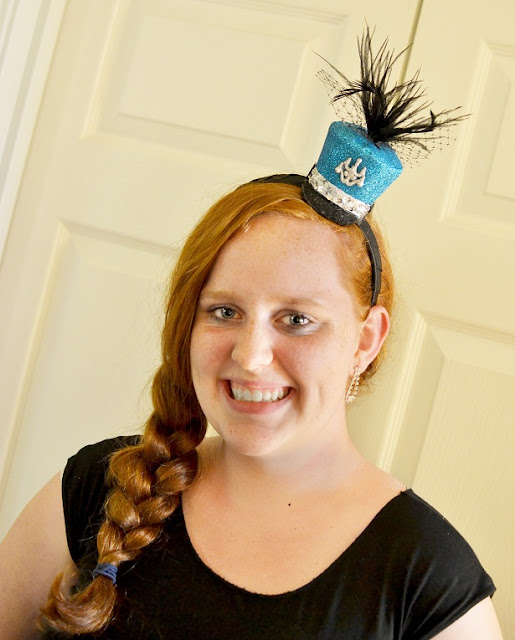 For the life of me I can't remember what these mini hats are actually called, so we will just call them mini hats. 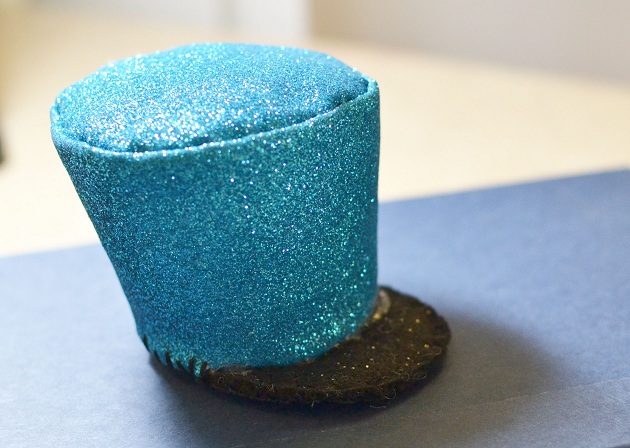 Madison said something about us making a mini marching band hat and I decided to run with the idea. She wanted something to wear to school on the days that they performed like football players and cheerleaders do.  This hat might be a little over the top for some kids, but my Madison is a little crazy :0)  Gotta love her! 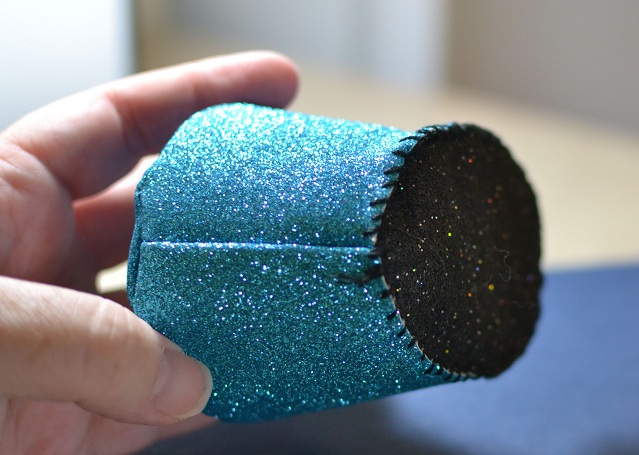 I made this hat out of two pieces of felt.  The sparkly blue felt was purchased at Hobby Lobby and the black at Micheals {I am in both often ;0}
I worked on the hat over a couple of days, whenever I was sitting waiting for kids.  I think I spent an afternoon stitching at the mall while Emmalee played at the playplace too.  Anyway, I guess I can proudly say I stitched the WHOLE THING by hand!  I wouldn't recommend it, but it worked.  I stuffed the hat with stuffing and stitched the bottom on. 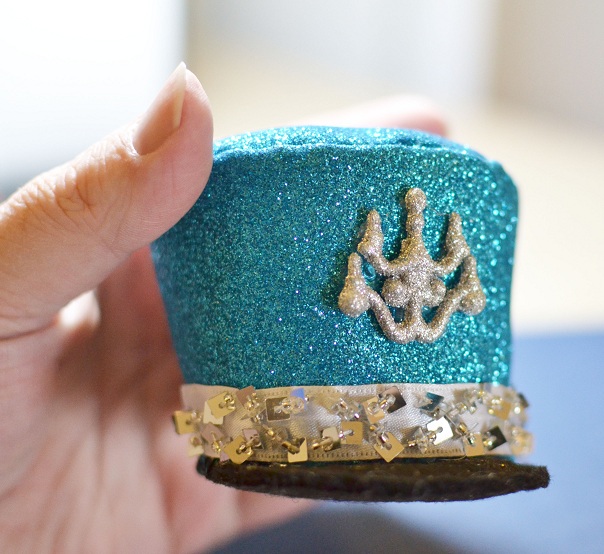 Some days later, back at home I hot glued the sparkly ribbon just above the brim and the accent shape to the front. 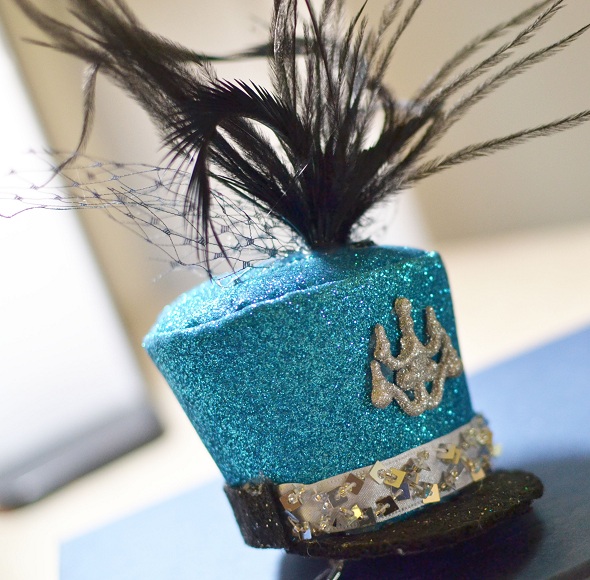 I glued a strip of the sparkly black to the back of the hat to finish hiding my crazy stitches, then threw some feathers in the top for the plume 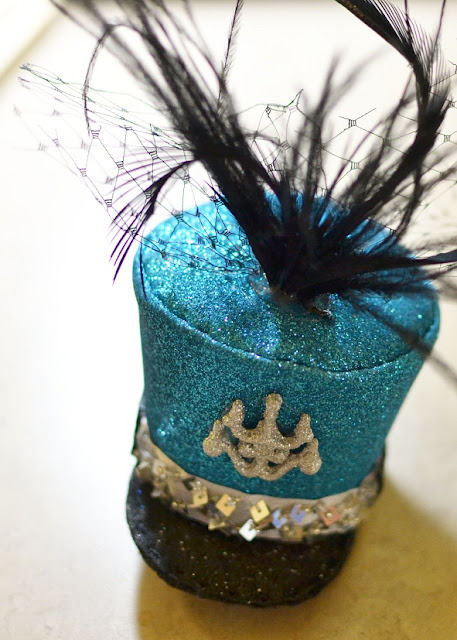 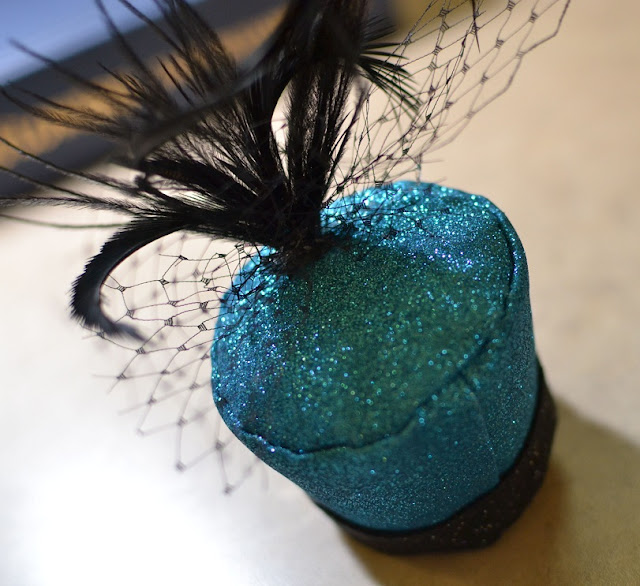 In order to get the feathers in I cut a small hole with scissors, arranged the feathers and netting where I wanted them, then ran a thin line of hot glue around the base of the feathers to hold them in place. 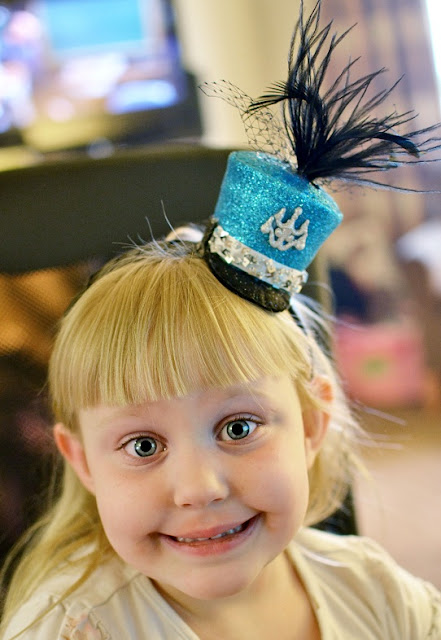 Goofy picture, I know, but Emmalee just had to try the hat on.  It was so cute, I think I am going to have to make another one! Remember when I mentioned the trip to the mall?  Well I think that was one of the only moments I have had in weeks when Emmalee left me alone for a moment.  It was so fabulous, I finished the marching band hat, then used the scraps to make this hat too!  {that is why my witch hat is blue}

Anyway, stitched a few more things on there, added a poofy collection of ribbons and a dangly spider out of the top, and shaZaMMm! 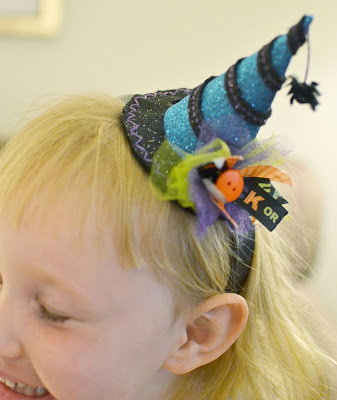 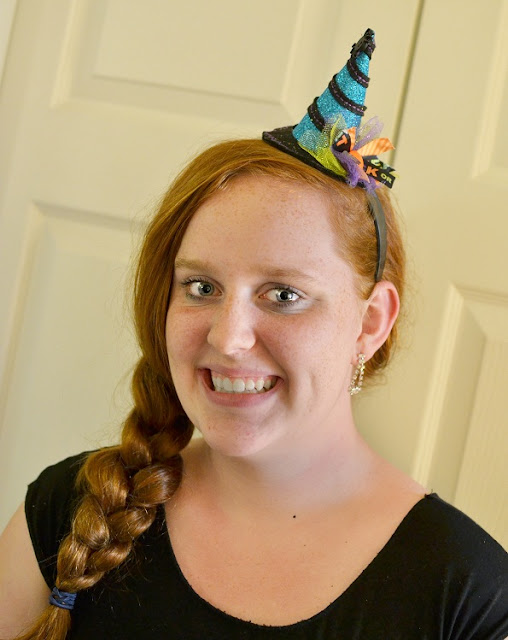 I should probably tell you that I put the marching band hat on a clip and it was awful!  It wobbled around and was crazy.  Not sure how to fix that issue, I cut off the clip and glued the hat to a headband.  The witch hat is also glued to a headband.  Lucky for me, I had a stash in my ribbon box from some shopping trip to SAS fabrics in Phoenix.  Can you imagine it, headbands for $.25 each!  They are fabulous too.  Wide and snug enough to stay in place, but not too snug to hurt your head.   Man am I going to miss that place!
If I get the chance in the next couple days I will get the patterns printed up.


These two hats turned out so well, I really can't wait to make more.