PJs for the Princess 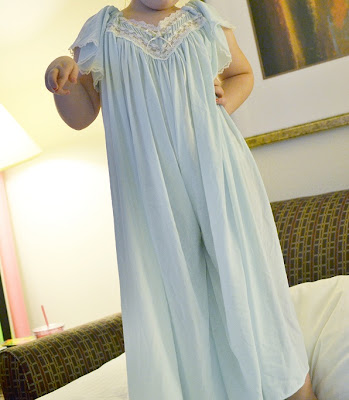 I have wanted to make Emmers some PJs like this for a very long time.  I have a whole pile of this silky fabric from my grandma, but I just get stressed out whenever I think about making a pair from scratch. 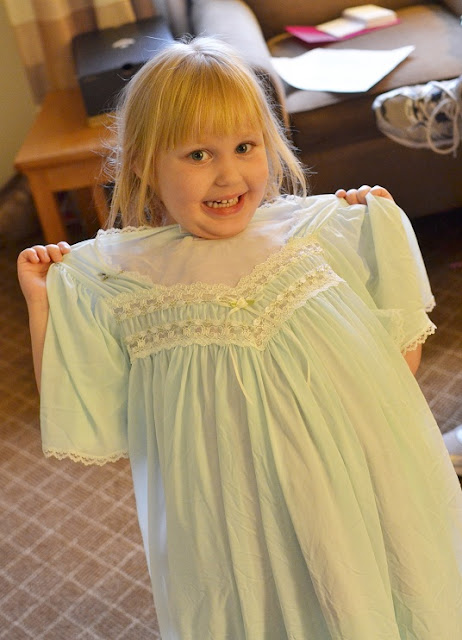 So, the other day when we were "thrifting" I found this baby blue nightgown, fit for Cinderella, but a women's size small.  It was far too big for my girly, but that was a problem I thought I could fix rather easily.  I had Emmalee put the night gown on, then I lifted it up until I could see how high the shoulders needed to be to fit.  I marked the spot with a pin and had her take the nightgown off. 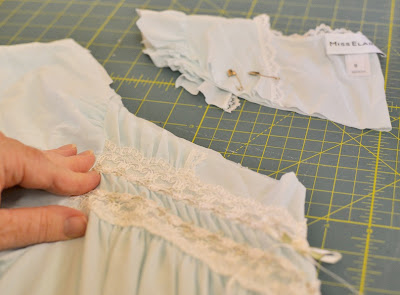 I took the nightgown, folded it in half and laid it on my cutting mat.  The front of the nightgown has a beautiful lacy piece I didn't want to destroy so I made sure not to get close to it with my rotary cutter.  I took the cutter though, and started it about an inch higher than the lace.  I continued to cut past the pins and into the shoulder ruffle so that I cut an arc out of the neckline. 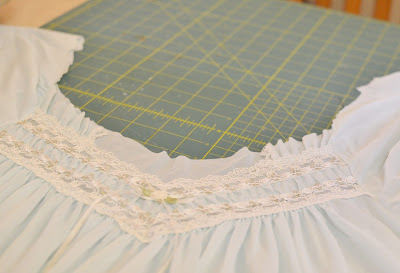 When I opened the nightgown up, it looked like this. 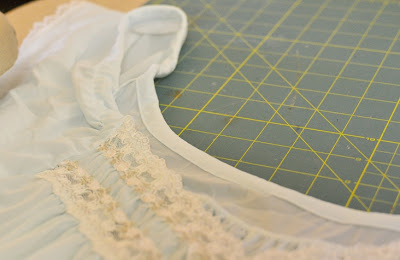 I double folded the edge over and stitched it in place, leaving openings at both ends in front by the lace piece. 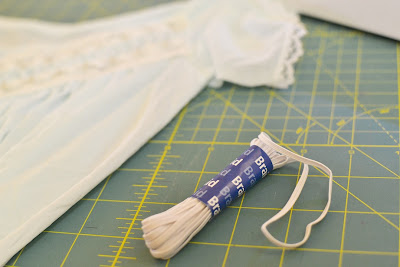 The next step was to run elastic through the small casing around the neck.  I used this 1/8" elastic I had in my box.  I don't really like to use this thin of elastic.  It isn't super comfy when you wear it...mainly because it doesn't stretch very well.  Luckily, I don't need this to stretch too much and it will do fine.  I think normally I would recommend 1/4, but actually 1/2" elastic, but the 1/8" works when you are in a bind. 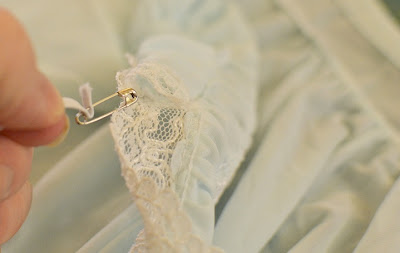 So, I stuck a safety pin through the elastic, then ran it through the casing til it came out the other side. 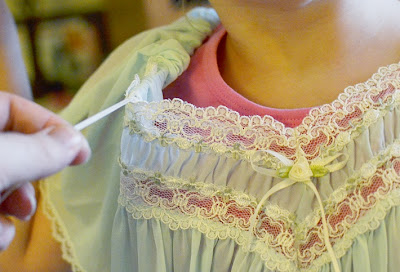 I am a self-taught seamstress, so most of the time I have to put the clothes on my subject and do the elastic.  That is what I did here with Emmalee.  I had her put the PJs on, then I pulled the elastic until the neckline was where I wanted it.  I pinned it in place, then went to the sewing machine and sewed the elastic down. 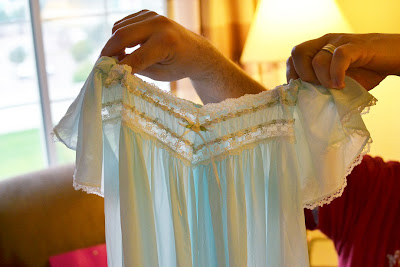 Here is a pic of the top portion, all done! 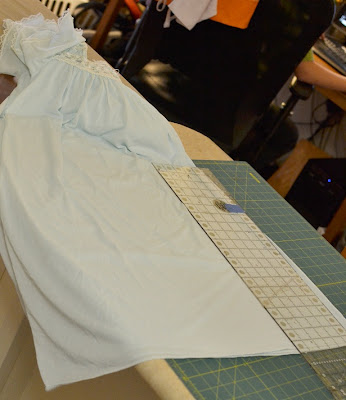 Now, even though Emmalee didn't want me to, I really wanted to make this a jumpsuit-type pajama.  I just have not been a fan of nightgowns with my girls.  The original plan was to make the bottom pants, then add elastic to the ankle so the outfit would be like Princess Jasmine...

{source}
But it was a big enough fight with Emmalee to have them pants at all.  I figured, if I left the bottoms open, it would look more like a night gown, but still be pants.

Anyway, enough of that discussion... 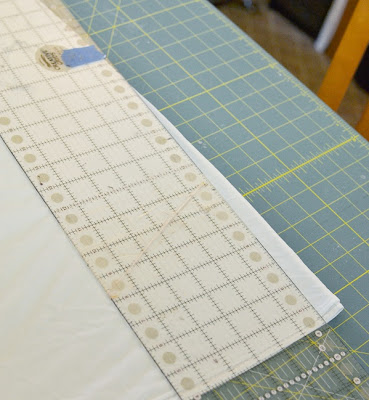 I cut off a small triangle of fabric from the middle of the nightgown...probably about 1" at the bottom, ending the cut where her inseam is. 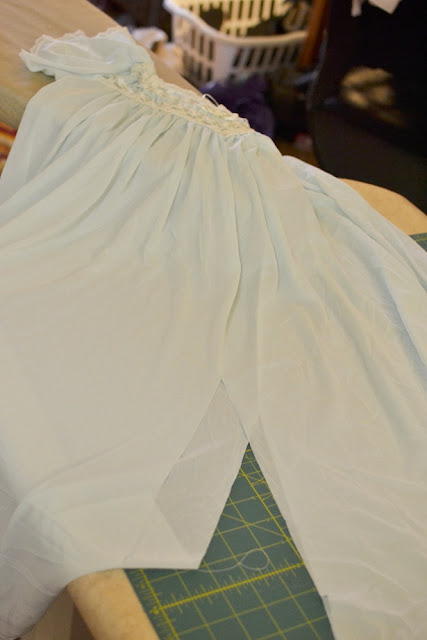 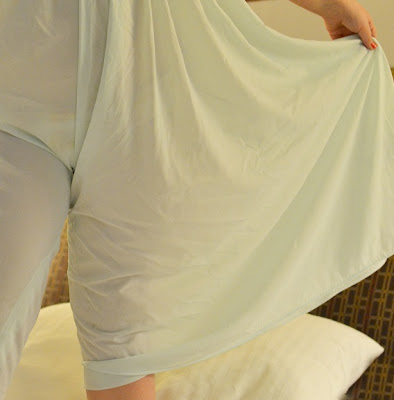 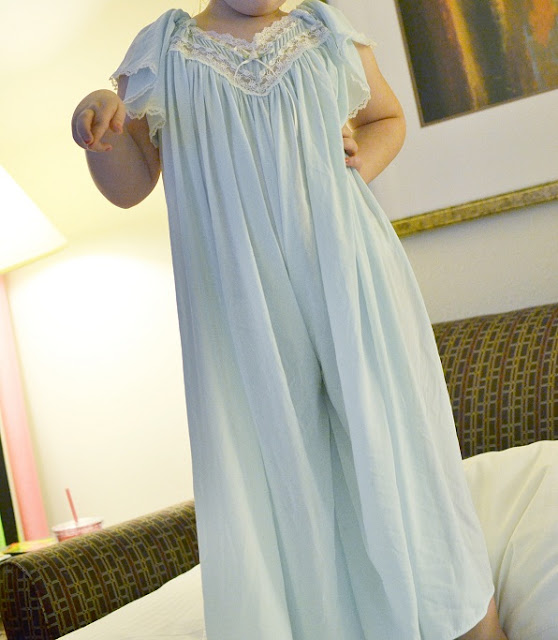 After a little bribing by big sister Madison, Emmalee finally tried them on {three days later} and LOvEd Them!!!  She wants more ;0}  Guess we have to find that box of Grandma's fabric and give it a try...or just go back to the thrift store.  These jammies were WAY cheaper than buying kids jammies...and more princess like :0)