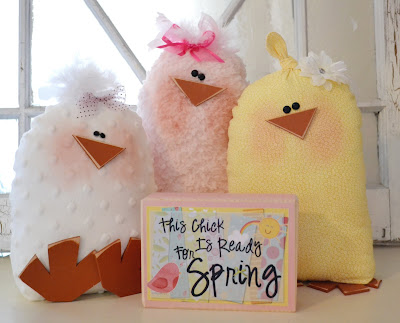 I know that Spring is long gone from your brain, but we had a ladies church activity last night and I was in charge of the table centerpieces.  I was originally going to do the chicks out of wood, but my band saw was not working again.  I gave up on it altogether and took it back from whence it came.  I ordered a much bigger, more powerful saw, but it won't be here until Monday.  That left my mind wandering about what to do.  Oh, did I mention that the theme for the activity was Chicks Night Out-why I am making chicks when I should be making Uncle Sams :0) 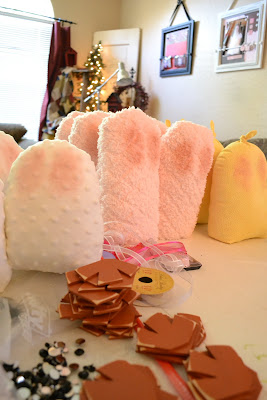 The yellow one was my original idea.  I drew a tombstone-like shape, then added a long finger-kinda-thing on top.  I thought it would be cute to have a little spurt of fabric up there in stead of feathers.  When I went to Joanns to buy the fabric, I was suckered in by the minky and it's oh-so-fluffy softness.  The chicks were made different shapes and sizes just like the ladies at church :0)  I use real blush on the cheeks, brushed on with a brush, my finger, and/or a cosmetic sponge depending on the fabric. 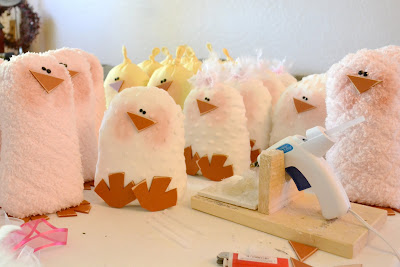 Here they are with their faces on.  I went with 1/8" wood for the nose and feet.  The feet were perplexing me.
These chicks are rather similar to the chicks I did last year and I didn't want them to be exactly the same.  That was why I ended up hot gluing them under the chicks on the yellow and pink ladies.  I really do love them glued to the front of the body just a little bit more. 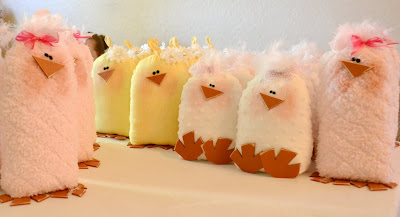 We did up their hair.  I glued white or pink boa to the heads and added small bows.  The poor yellow chicks were looking kinda bald at that point, so they got some bald-baby head flowers (something we know a lot about in this bald-baby house :0) 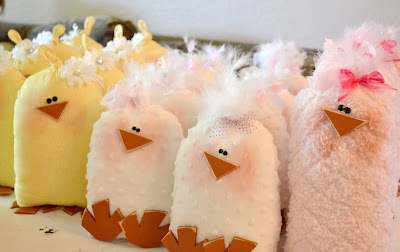 Did I mention how many I made...8...8 sets of 3 chicks.  I started Wed. night at about 11pm.  I went strong until 2:30am, then started back up again Thursday morning.  One set would be relatively easy.  The part I hate most is stitching the bum shut by hand :0P

There you have it!  My Hip Chick Trio!  I added the block with saying for added table fun.
I realize that it doesn't make much sense..."This chick" instead of these chicks, but whatever. 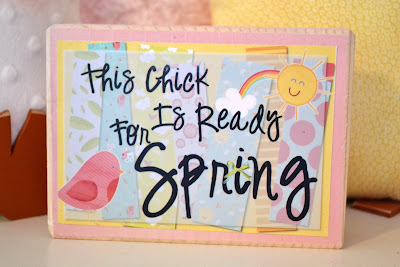 I made double of these so they could be given out one block with one chick.
Here is the printable if you are interested. 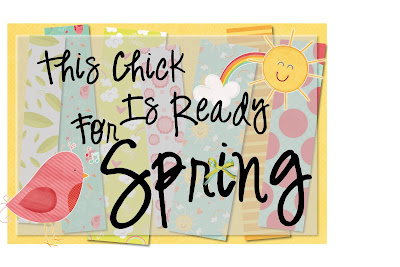 Click on the image.  When the bigger image comes up, right click on that and choose "save image as" when the prompt box appears.  From there, the file is yours!  You can send it to Costco/Walmart/Target/wherever you send your photos.  Order the number you need.  When you get your prints, trim them down to the yellow outline.  I bought my wood, a 2x6 and cut it into blocks.  I will tell you, if you don't have a saw, you can head to Lowes or Home Depot, or even better, your LOCAL LUMBER STORE-Man I LOVE local lumber stores- and ask them to cut your block(s).
Paint the blocks, Modge podge or glue image to the painted block with on with white wood glue.  Modge podge over the top and you are good to go!
Happy Spring!
Afterall, we still have half of spring to go.