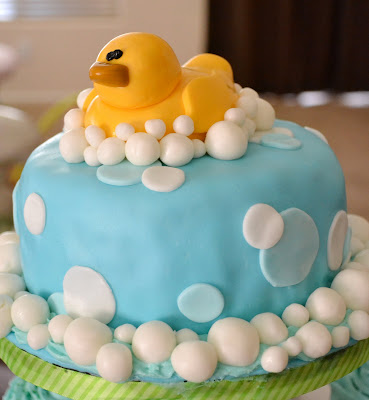 I made this Rubber Duckie CupCake Cake for my friend Amber.  She is expecting a little boy next month.
You already know that I am a perfectionist FREAK so you should not be surprised to hear that I was not so happy with this cake.  I decided to put it on the blog anyway for...I don't know why :0) 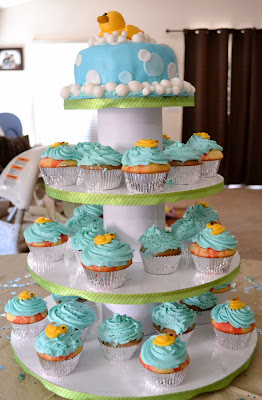 The stand is the same cupcake stand I made last year.  I just change the ribbon around the edges for the different occasions. 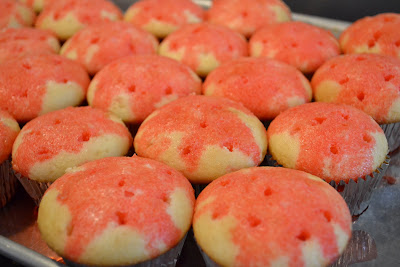 I made two different cupcake flavors.  The first was a strawberry vanilla.  You are gonna' think I am crazy, but you bake regular vanilla cupcakes, poke holes in the top, then pour prepared jello on top.  I told you it was crazy, but OH So GooD!  I have two more orders for these cupcakes since the party :0)
My other cupcake was a carrot cake, dipped in caramel sauce and topped with my favorite shower frosting EVER!!!!  No powdered sugar.  It is so yummy you really don't need a cake, just a spoon!
Here is the recipe:
Cream Cheese Pudding Frosting
4 ounces cream cheese (room temperature)
8 (1 ounce) squares white chocolate-----I used white chocolate chips because they are cheaper!
1 cup heavy whipping cream
1 (8 ounce) container frozen whipped topping, thawed
1 small box of pudding
Heat the heavy cream until just beginning to boil. Pour it over the
white chocolate (chopped) and the remaining 4 ounces cream cheese. DO NOT STIR!  Basically I let the chocolate and cream cheese melt before mixing to avoid lumps. Once cooled for like 30 minutes, add one box of instant pudding to the cooling mixture. Beat it with your electric mixer to whip the whipped cream for about 2 minutes.  It will get thick like pudding.  I like to use Cheesecake flavored pudding, but just vanilla would be good too.  Finally, fold in the whipped topping.  Yumm!
This recipe colors well and pipes fabulously!  You have to try it!!!

OK, so when I started the cake I had 4 hours.  I told myself I would not loose a whole day to the making of this cake, so I only gave myself 4 hours.  I figured if it couldn't get done in 4 hours, I wouldn't do it.  I got down to the bit of time and had just finished making the fondant.  The cake as a whole was cute, but my rubber duckie on top did not look like I wanted it to and I had no extra time to fix it. 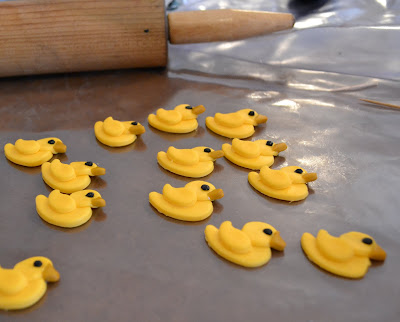 Also, I was going to make little rubber duckies for the cupcakes and had no time for that either.  In a last minute rush I made these little ducks and loved them!  I used three sizes of leaf cutters.  The biggest for the body, medium sized -I used just the tip to cut the beak, and the small for the wing.  I used the wide end of a icing tip to cut the circles for the heads.  So, while I didn't get to make the duckies I had in mind, these were a cute replacement.

I still can't stand that duck on top though.  I was even tempted to re-make it when I got home just to show myself I could do it better.  Oh well, I may just have to do this cake again sometime :0} 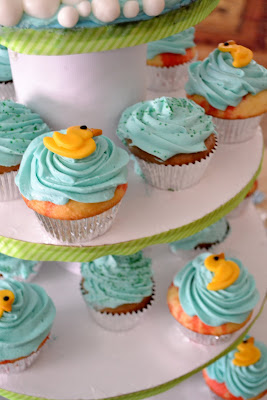 The cupcakes however, they were another story.  They were SO yummy!  I don't really eat the cake I make, but these were hard to resist!