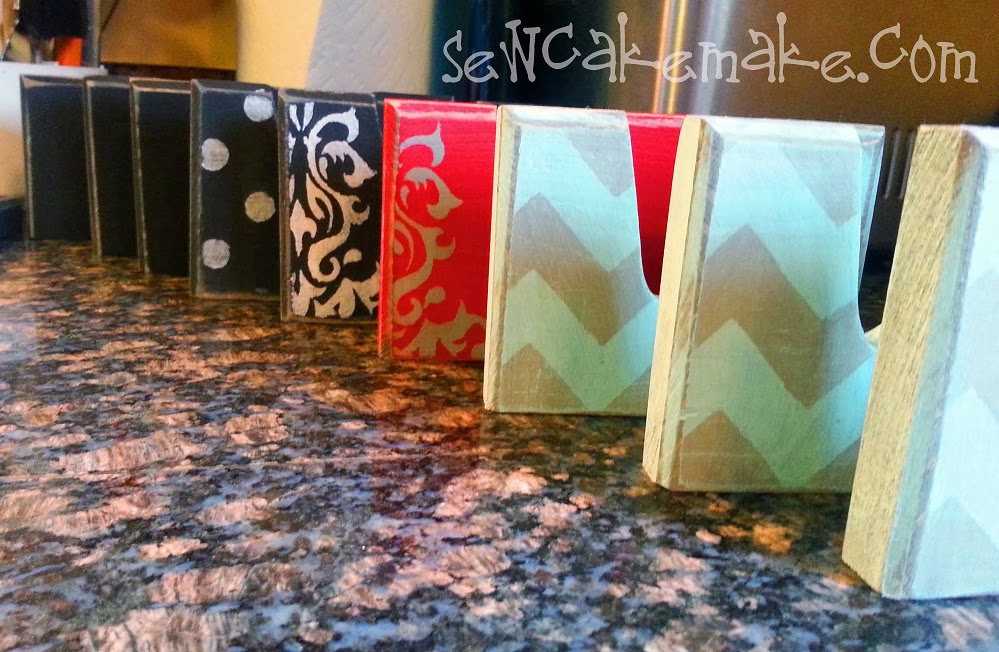 This morning I mailed off the final box of some 15 orders I have been feverishly working on...then waiting for my husband to screw together for the past two weeks.  The order for 8 fire pits was technically waiting for three ;0}  Let me just say, I have really been "Craften'" the Whip around here to get things done.
{like how I incorporated the creepy little title???  Huh?  Huh?} 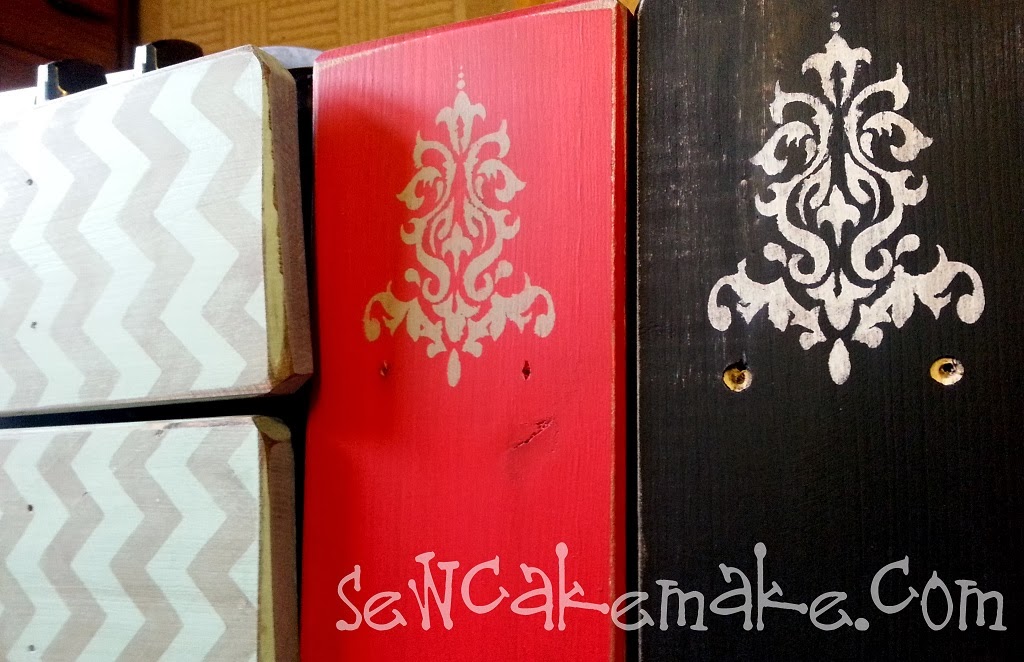 I wanted to show you these awesome glue gun stands though.  You know I AM the worst at taking pictures of my work, right?  I either remember in the beginning, the middle, or the end.  Never a complete set of before, during, and after pictures.

So, that said, these are gonna have to do.  The turquoise/grey chevron glue gun stand has got to be the most popular version by far, but the red damask is a close second. 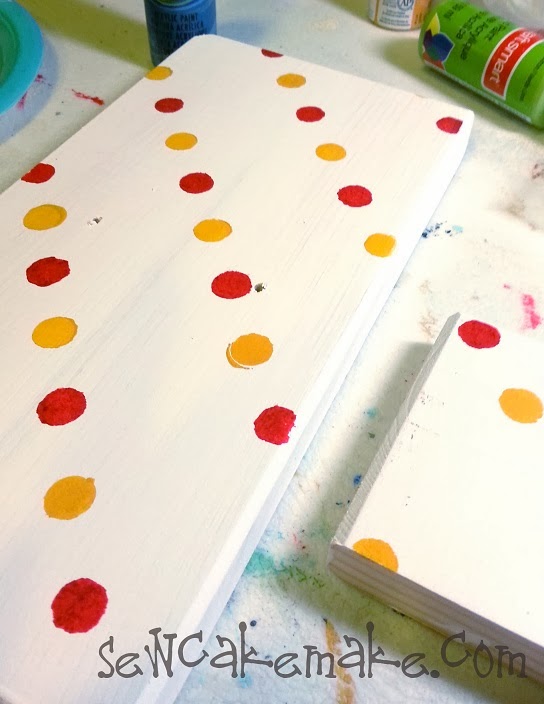 The polka dot is quickly becoming a favorite though.  The black with white polkas was absolutely adorable!

Then I got this special order, a red, yellow, green and blue polka dot on white.  Figuring out how to evenly space the different colored dots is enough to send me to the loony bin with my evenly-spaced-complex, but it actually worked out really well.  I used just my regular polka stencil I made with my silhouette.  Then, I just went down one diagonal row of dots and blopped every other one red, then filled in the skipped dots with yellow. 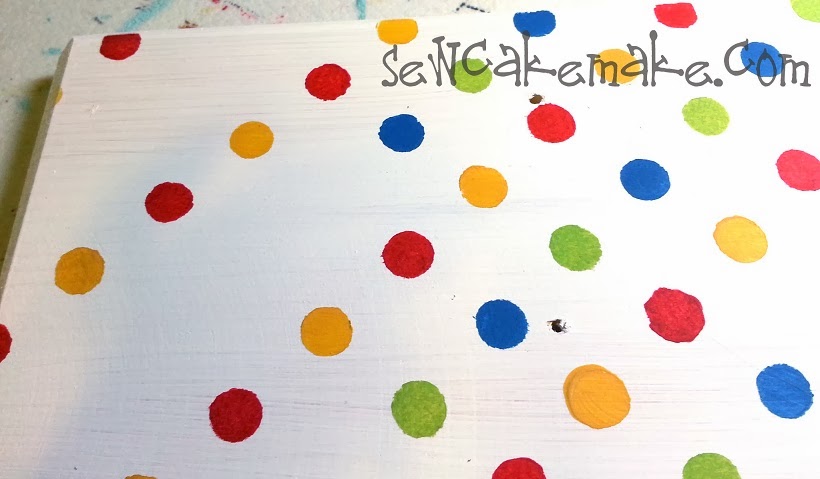 Once that was done, I did the same thing with the blue and green.  Worked down one diagonally row, every other dot blue, then the rest green.  HOW STINKEN' CUTE!!! 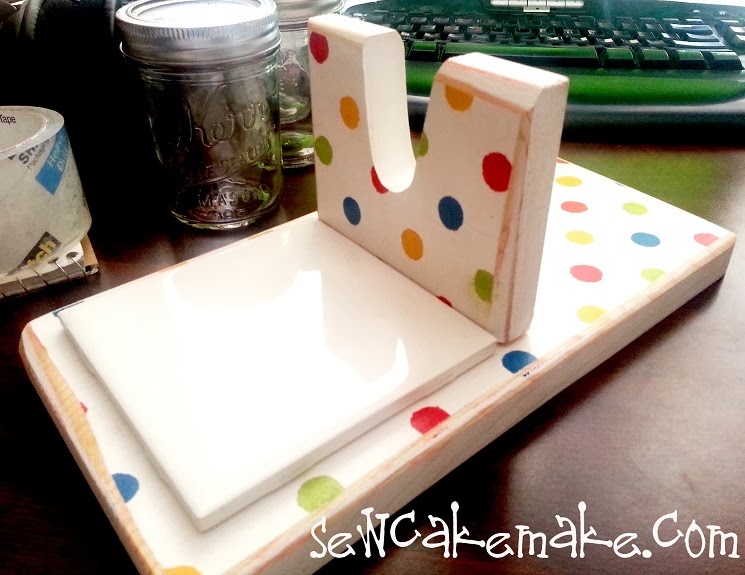 It reminds me of the book Put Me In The Zoo.  I showed the stand to Scott {when I made him screw it together} and he said exactly the same thing.  Now we will have to go read a little Seuss to fulfill the need this Hot Glue Gun stand has left in our hearts <3 p=""> 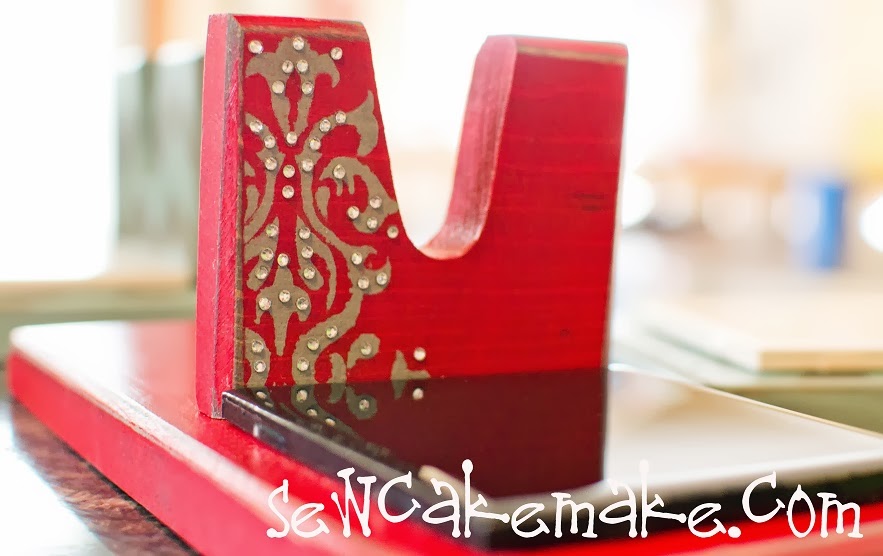 The next "new" stand I did was one with BLING!  I used my handy dandy heat setter tool...

and placed every one of those rhinestones on there by hand, then went back and set them with the tool. 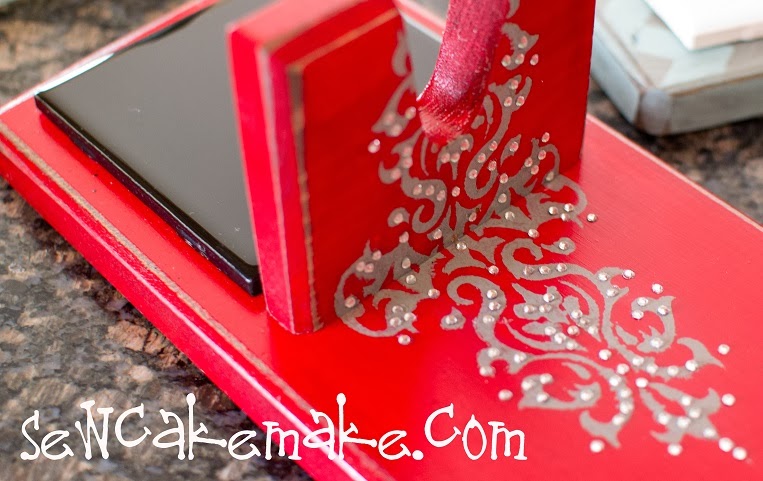 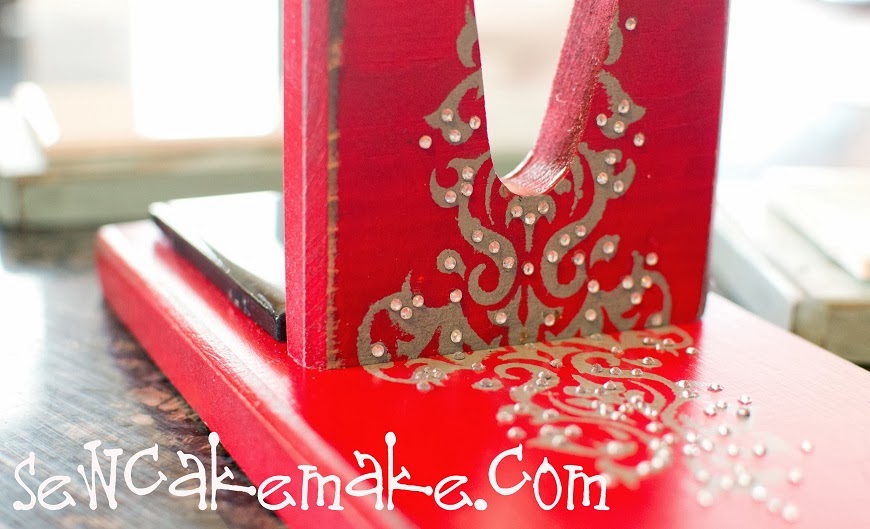 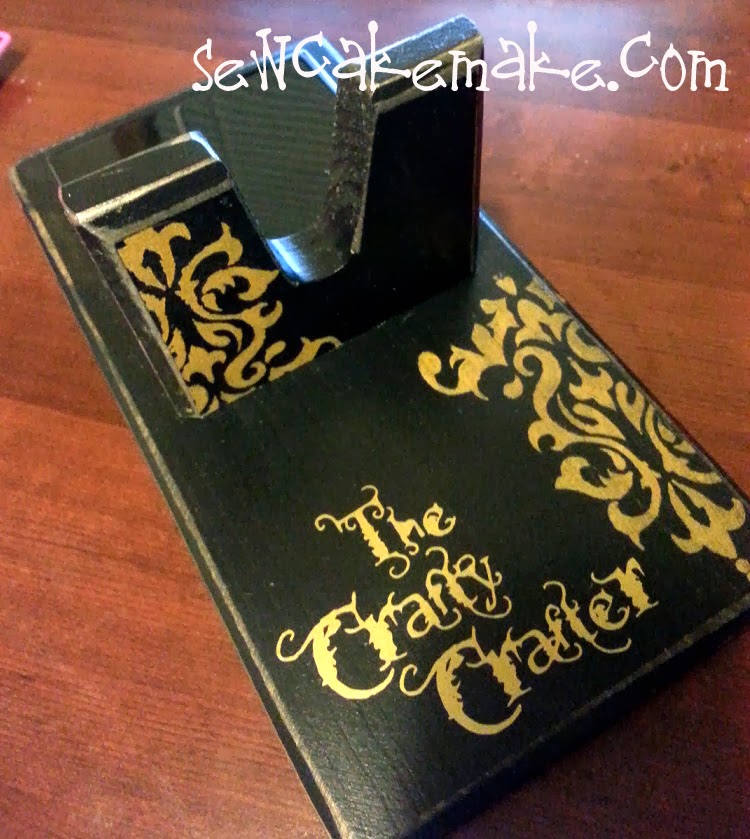 This one I made for a sweet husband to give his wife back for Christmas.  I was SO IMPRESSED!  There is NO WAY Mr. SewCakeMaker would have searched Etsy for a gift for me, LET ALONE actually message someone and ask for a special request.  SHOCKED.  Anyway, his wife is a seller on Etsy too, and he wanted her actual shop name on the stand.  I was so surprised by the order, having just listed the stands only a week or two before, that I had to take a minute to think about what to do.  Finally I went with vinyl.  I worked the name up on the Silhouette program and cut it out in gold vinyl.  Turned out great, I might add.  Now-a-days I probably would have cut a stencil and stenciled it on so it had the same look as the rest of the design, but I do actually like that the name is in solid gold.  I think it makes it stand out more than the rest.

Now, I just have a bunch of random pictures for you... 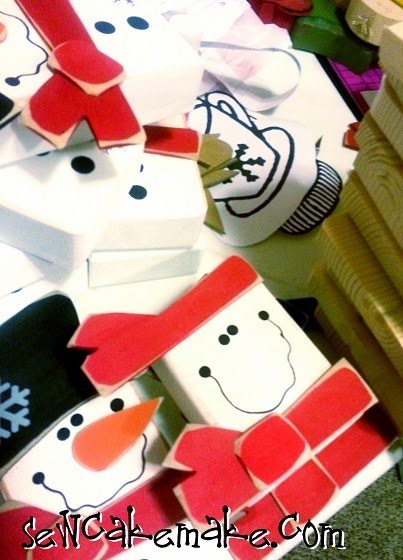 This one makes me laugh.  Remember back a few weeks when I made the Brrrr Snowman?  Well, I had one guy with no hat, but instead had an extra scarf on the table.  As my children often do, they walked by my work table and saw an opportunity to leave their mark.  I don't know if it was Emmalee or Eli, probably both, but when I came back to the table, one of my snowman was a sensei.  Yep, Sensei Snowman.  Bet it never crossed YOUR mind to make a karate snowman before ;0} 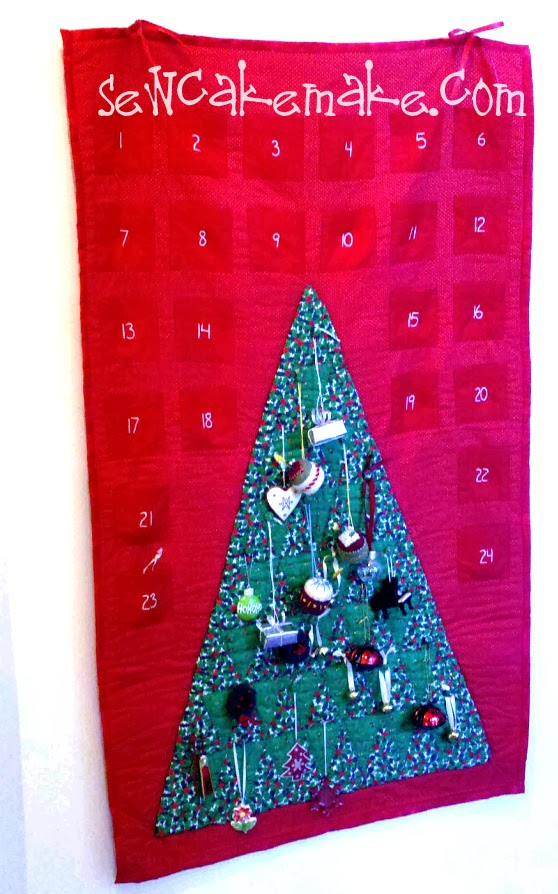 Next, I had a customer in December order some of the mini ornaments.  She was such a cute lady and told me how she was going to use the mini's for a quilt-style advent calendar.  It sounded interesting to me, so I asked if she happened to have a picture.  She had to wait until Christmas to get me one, but sure enough she took the time to come back and show me this cute wall hanging advent calendar.  LOve iT! 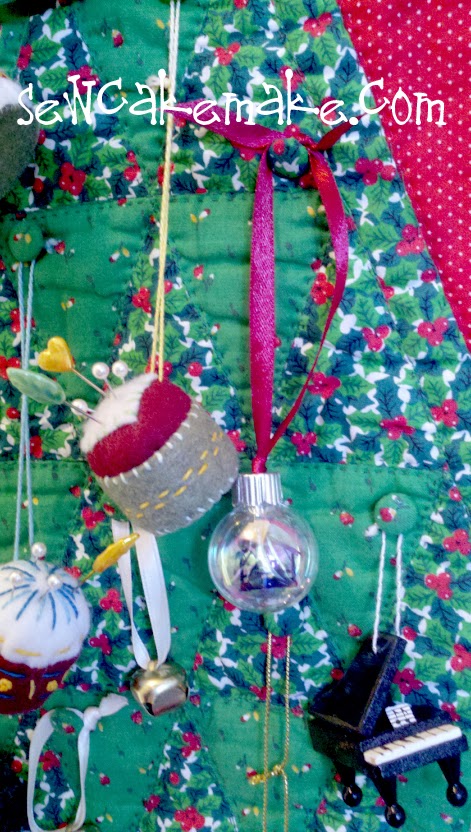 And there is my little mini nativity ornament.  What a cute idea.  Dotty, thanks so much for sharing those photos!!!  I told her I absolutely loved the little pin cushion ornaments.  I haven't heard back yet if she made them herself, but they are adorable. 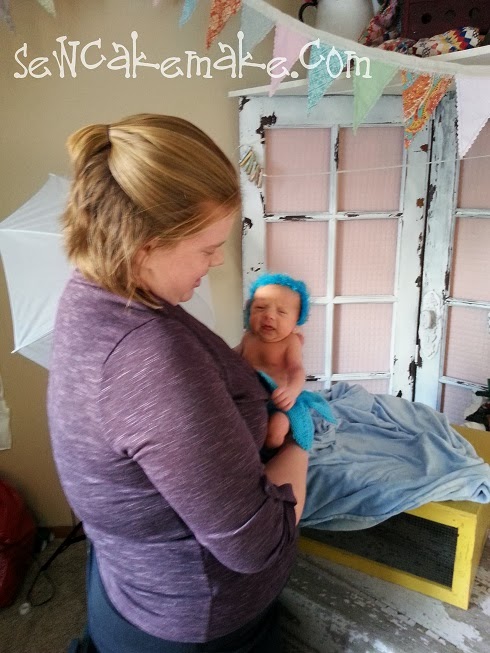 Now, I still need to post about my little nephew Sawyer that was born in December.  He came a bit early and really made an entrance into this world by starting out with a several week stay in the NICU.  We did a little photo shoot of him once he got out.  I will show you those adorable pictures in the near future, but these two didn't make the cut.

Remember sweet Mary from back in Arizona, the world's best Yarn-smith???  Well, she made this cute little pixie outfit for me back when she first started selling on Etsy {ContrarywiseDesigns is her shop name AND she has the pattern for the pixie outfits for sale HERE ;0} 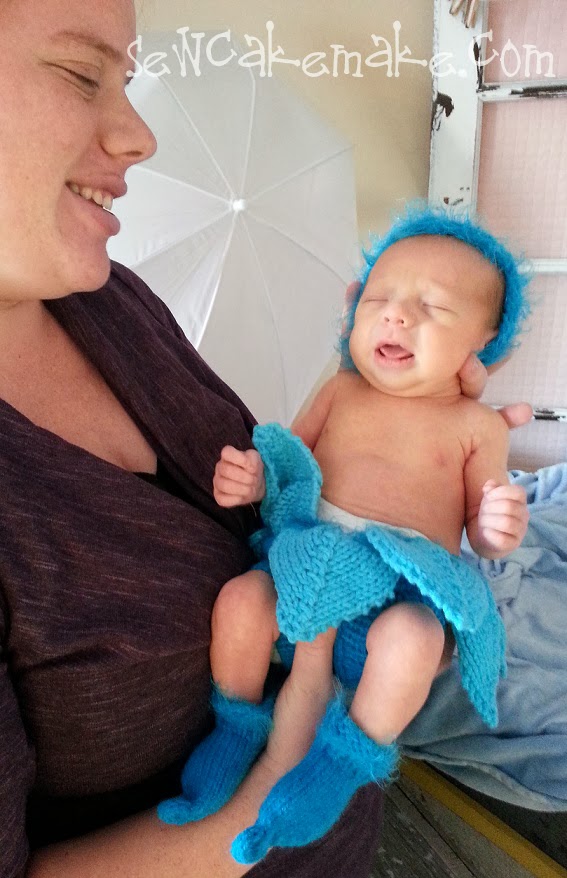 Seeing as how Sawyer is a boy, and Kallie's significant other was NOT a fan of us putting a "girly" costume on him, we only got a quick snapshot of the outfit before the whole thing was kaboshed.  I guess that makes these photos black market items or something, but here they are nevertheless! 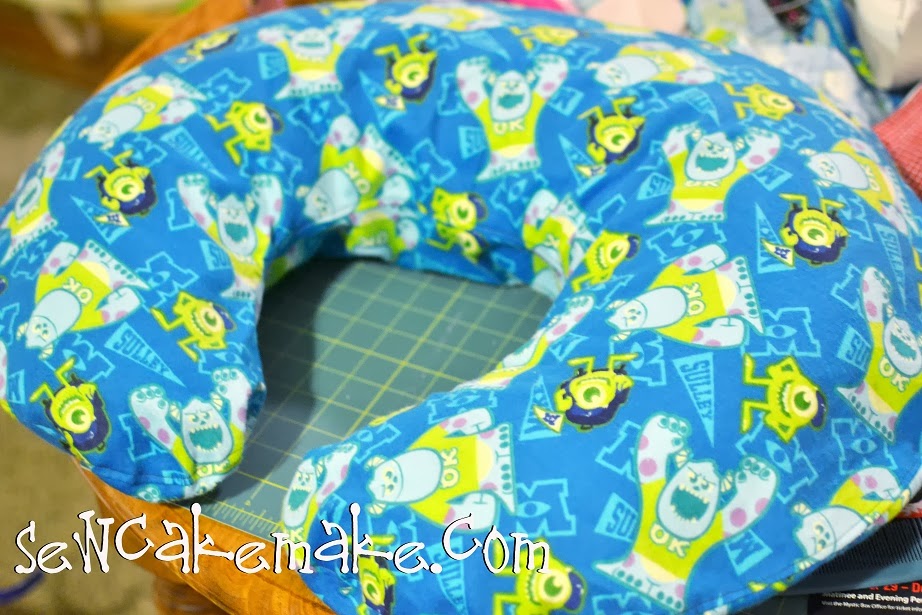 Before Sawyer was born, we made a couple blankets and this cute boppy cover. 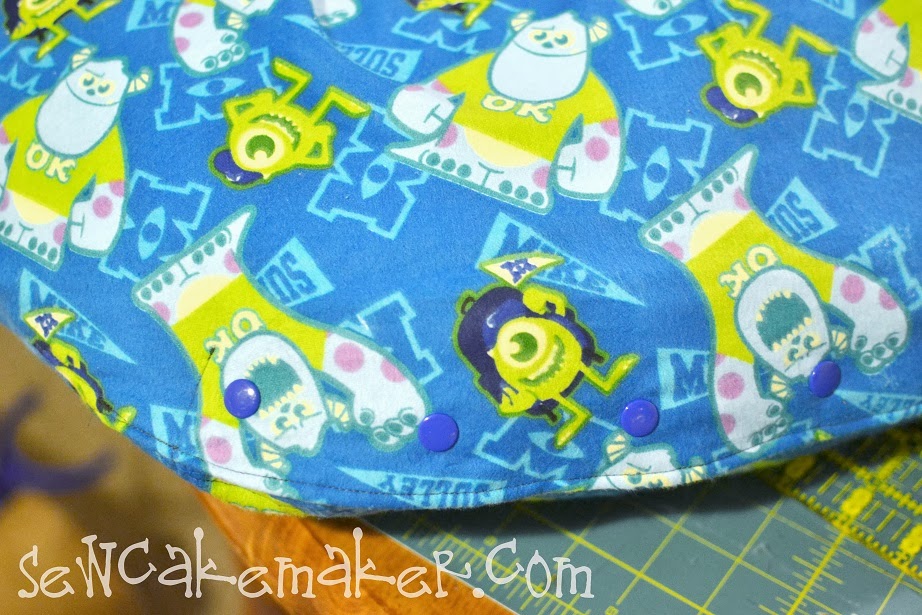 I always enjoy the opportunity to break out my snap press and get snapping!  Never heard of a snap press before???  They are FABULOUS!  If you find yourself installing a lot of snaps, you need to check out KAM snap presses.  I got mine on thesnapstore.com.  I recommend the starter pack...and YES you need to buy the die set.   The starter begins at $115, but it is so, so awesome!  I will have to show that machine off one of these days.  As for today, I have more blue and gold cubes to design before the kids get home from school.

Have I mentioned how nice it is to NOT have a snow day today ;0}

Email ThisBlogThis!Share to TwitterShare to FacebookShare to Pinterest
Labels: All Me, Baby, Christmas, Etsy, Woodcraft