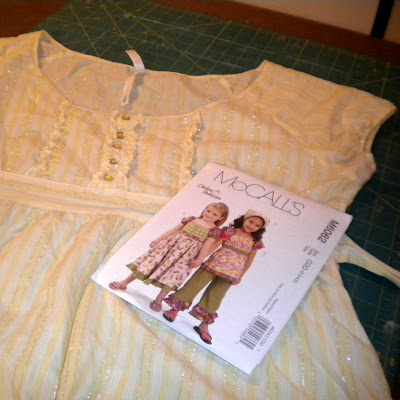 I have been totally glowing from the thought of my serger working again.  Plus, I have been absolutely thrilled that my dear sweet husband was able to fix my singer!!!  Bless HIM!  Given that, I had to try this shirt re-do.
Back in April Madison and I went to half-priced Saturday and found this shirt for $2.  I wanted to make something for Emmalee out of it, but Madison claimed it for her own.  Now, months later (after a closet deep-clean), she gave it back.  I have had it in my procrastination pile for about 3 weeks.  Since I have been craving a little sewing time lately I decided it would be quick enough to squeeze it in.
Let me just say that I love this pattern, at least so far!  It is so simple and cute! 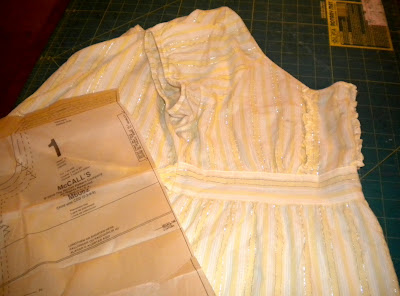 I just folded the shirt along the middle of the front, laid the pattern on top, and cut it out with my rotary cutter.  I did the same to the back, then again to the sleeves.  I cut off the ties and made them the casing for the elastic that runs around the waist. 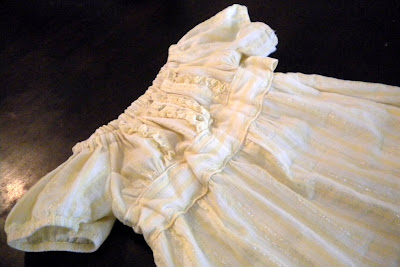 I am not sure I like the elastic look in the front on this particular shirt, but the project came together so easily.  It is Sunday Fun Day because I only cut the thing out Friday, ran around like mad on Saturday, then woke up at 6am Sunday so I could finish this little project for my little project to wear to church.  I was delighted with how easily it came together.  I was in absolute HEAVEN running my serger around it's buttercream yellowy threads.  You know I LOVE yellow, right?  And this shade of yellow is heaven :0)
My only sadness was that this re-made shirt looks almost identical to the original, just 6 sizes smaller.
I guess it is a good thing. The little piece of tie that was left was made into a bow for the back.  I went to all this work sewing each tie on, then realized that the front of the shirt snuck under the needle from the bottom side-accidentally sewing the shirt shut :0/  I unpicked it all, sewed the ties on again, tied the bow, then tacked the bow in place (I hate bows that are constantly coming untied!)
It was at that point I realized, I could have skipped half of all that.
I should have just tied a bow and sewed it on!!!
Duh!
I guess I know better for next time!
What else do I have coming up?  I spent moments everyday last week working on these hairbows.  Just wait till you see them!  I almost have them where I want them.  After that, I have oodles and oodles of chair bags to make for local elementary teachers.  I guess the schools just don't have even cubbies for their kids anymore.  More on that later!
Have a good Monday!