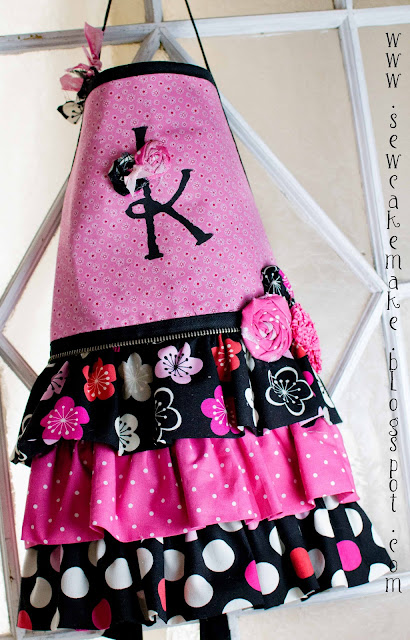 I made this cute apron for Emmalee's best little friend, for her birthday.  It was such a fun and easy project I may just add a few to my Christmas Gift list this year.
I used the free little orange aprons from Home Depot as my guide.  My children are abnormally tall for their age and I wanted to make sure the apron would not be too big for our little girlfriend.  I used that orange apron as my cutting guide and cut out the apron shape from a black piece of duck cloth, or canvas, that I had left over from another project. 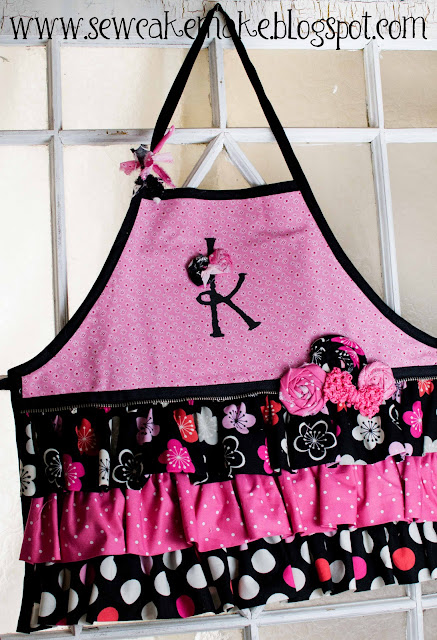 I marked the lines for the ruffles, and then used my ruffler foot to sew the ruffles directly to the apron.  For the solid pink bib part, I sewed the fabric, face down over the top ruffle salvage, then flapped it open and ironed it to the top of the canvas with heat-n-bond between the two fabrics.  I sewed bias tape along the top and bottom edges of the canvas to keep it from unraveling, then ran bias tape along the sides so that the canvas side and all fabric edges were encased to prevent any fraying.  It is so simple to do the edge this way, because you can take the bias tape up one side, keep sewing the bias tape for the neck strap, then just slide the tape over the fabric at the top of the other side and travel on down.  When you are finished you have a completely trimmed apron and you already have a neck strap!  Fabulous!  I attached two more lengths of bias tape that had been sewn shut to the sides, to tie the apron on.  The only trim-ish thing I could find in my stash was half a zipper, so that became the decoration between the ruffles and the bib. 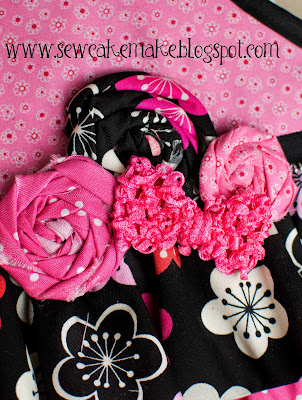 Keeping with typical embellishment, I made some rolled flowers and a bow for the waist line as well. 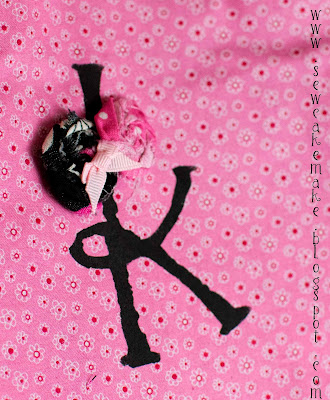 I was stenciling my Halloween bags at the same time, so I decided to just stencil the monogram on the front as well.  I thought about using heat-n-bond and fabric to make the letter...but let's face it, I was too lazy to sew around the whole monogram.  A much cuter letter can be done by stencil for WAY less effort.  I did give the monogram two coats of black acrylic paint, just the same stuff I use for my woodcrafts, and then added some more flowers when the paint had dried.

For just a little more frill, I tied a couple strips of scrap fabric to the neck strap and called it good!
I will admit it was a little hard to give this project up {totally Loved it} but it was sure fun to see our best little friend tie it on :0)
It also made me wish I could Tie One On.  Guess I better make an apron for myself, with all that fashionable holiday baking soon to be had.  I need to feel a little more like June Cleaver and I'm pretty sure a ruffle apron would be the key :0)