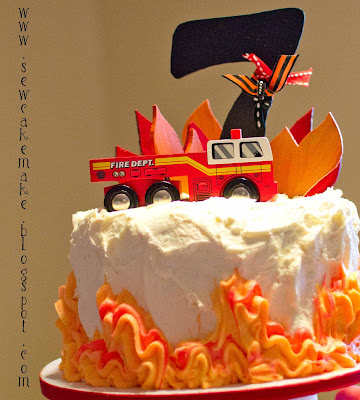 I made a quick FireMan cupcake tower for a friend the other day.  Her son was turning seven and they had hired a Fire Truck to come to the house and give the kids an up close birthday experience *Totally FUN* 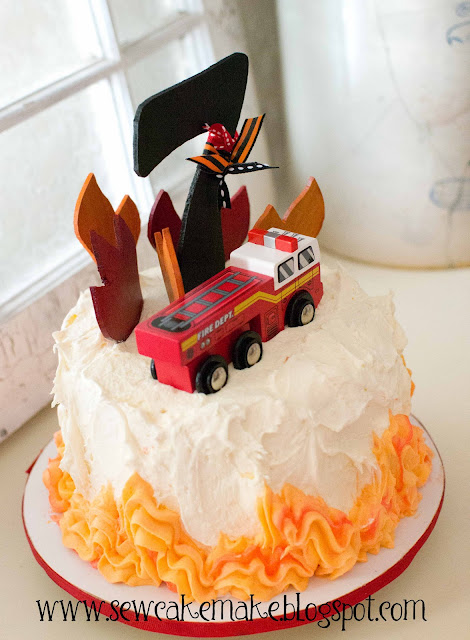 I went with my strawberry jello cake with whipped white chocolate cream cheese frosting for the cake.  Trying to keep thing simple, I purchased the wooden fire truck from Target for $3 {What a bargain!} and cut the "7" and the flames out of 1/8" wood on my saw. 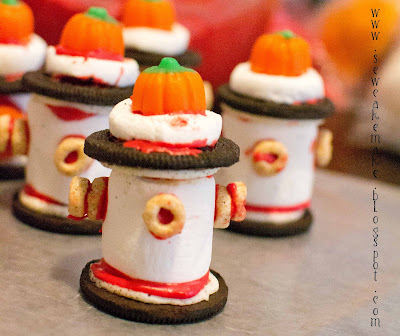 In the middle of the night it hit me that I should make fire hydrants!!!  Here is the naked truth :0)
We took the tops off of Oreos and only used the frosted sides. I put a dab of melted chocolate on the cookie icing, then plopped on a big marshmallow.  Dab of more chocolate, then another cookie, icing side first.  On top of our ridiculously large marshmallow-Oreo sandwich I added a slice of marshmallow {cut a marshmallow into 4 equally thick slices} and topped it off with a marshmallow pumpkin {which had also been trimmed-about 1/3 of the bottom taken off with my kitchen scissors}.
A couple cheerios were added for the nozzles and it was time to dip! 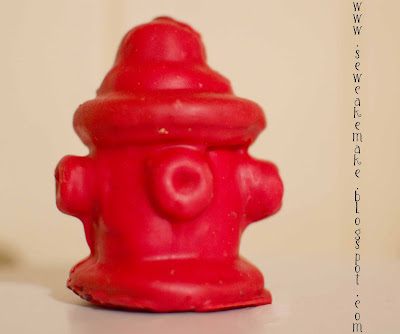 Let me just tell you right now that this kind of dipping is not for the faint of heart :0)
I ended up shoving a BBQ skewer into the backside of each poor little fire hydrant so that I could fish them out of the bowl.  I would have made them pops on sticks, but couldn't think of a cookie that had a hole in the middle that a stick could be shoved through.

Anyway, dip in melted chocolate, tap on the side of the bowl to get excess chocolate off, then set on wax paper to dry. 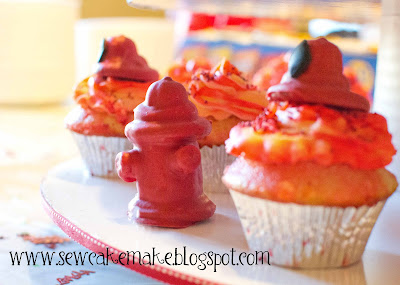 Not every hydrant was stellar, but they were sure cute and a fun addition to the cake stand.  We also make the helmets on the cupcakes in the same fashion as the hydrant tops.  The brim is the top of the Oreo earlier rejected in the hydrant production, marshmallow slice, then finished off with a shortened marshmallow pumpkin.  We added the little emblem cut out of fondant to the front of the hat for accent. 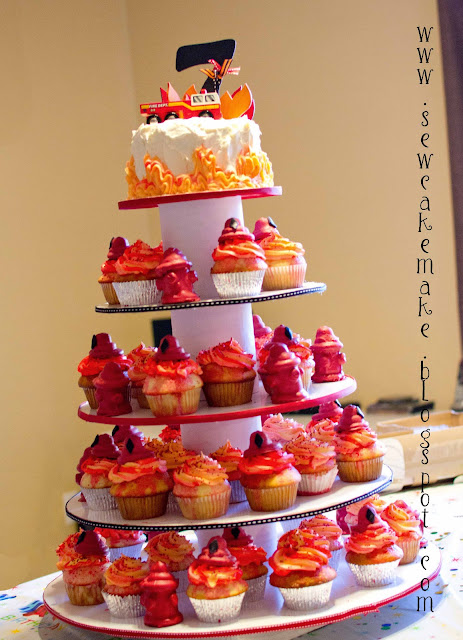 Madison thought the frosting needed to be orange.  At first I looked at her like she was crazy, but then it made sense, like fire!  Momma is a little slow these days.  I colored the bag with red icing color before loading it with orange icing, then frosted the cupcakes.  Madison also thought the cupcakes needed more red so she added the red ballies...I forget what they are called. 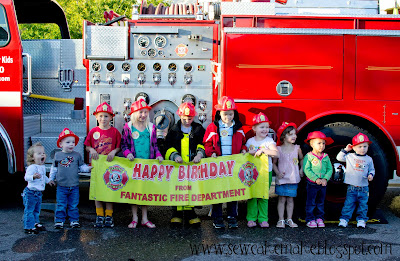 ANyway, the kids had a great time at the party, and I had a great time making the cake!
How cute is that picture?!?!
What a great idea!  A fire truck birthday company.  Why didn't I think of that!!!