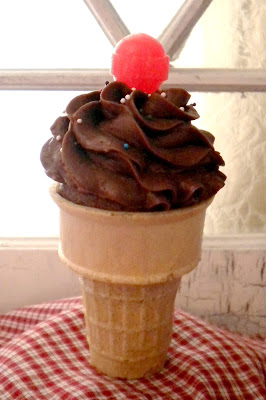 Yesterday was Eli’s birthday so I just had to bring him some treats at school.  You see, my birthday falls over Christmas Break and as such, I never in my whole life was able to bring birthday treats to school :0)  Do ya feel sorry for me?  I will give you my mother’s phone number and you can tell her just how bad you feel :0)
I know that these Ice Cream Cone CupCakes are nothing new.  I remember having them as a kid.  However, when the kids in Eli’s school class saw them they were simply amazed :0)  They thought I invented the idea.  When I told Scott about the kid's reactions to the cupcakes he said, “What, are they so old that they are new?”  I guess that is the case.  Anyway, I heard an idea for making these a little easier and thought I would share. 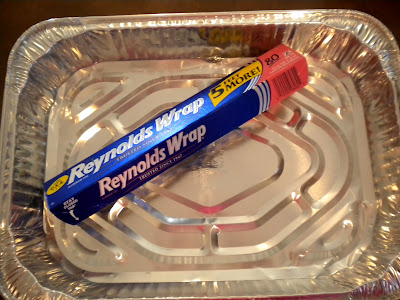 It involves foil:0)
I used over-sized roasting pans to bake my cones in.  I wanted a big pan because I am lazy and only wanted to have to bake 2 batches.  Anyway, run foil across the top of the empty pan-I used 2 pieces-just like you would if it were half-full of leftover lasagna :0) 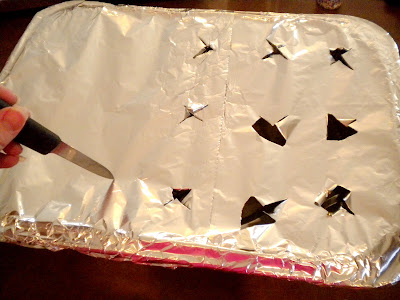 Use as sharp knife and make an X where you plan to put a cone.  I was able to get 15 cones in the over-sized pan.  When loading the cones I filled the X's all the way around the outside edge first, then moved to the middle spots.  I thought it made the foil stay in place better than squishing them down in the middle. 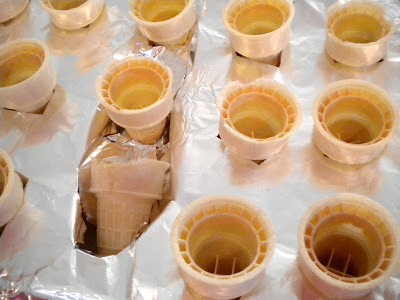 I had technical difficulties when loading up the middle row.  I pushed the cone in and broke the foil.  For future reference, cut the center holes bigger, then use your fingers to open them to the right size.  It helps, but doesn't relieve the issue.  It really was no problem though... 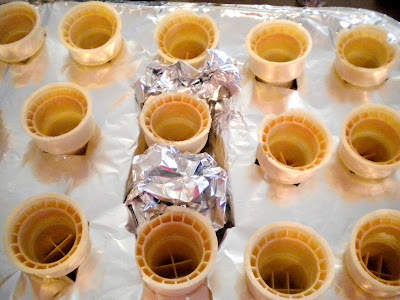 I just scrunched up some foil and filled the holes.  Worked like a charm.
Now for the BIG defunkle...
I over filled the cones.  They looked something like this before... 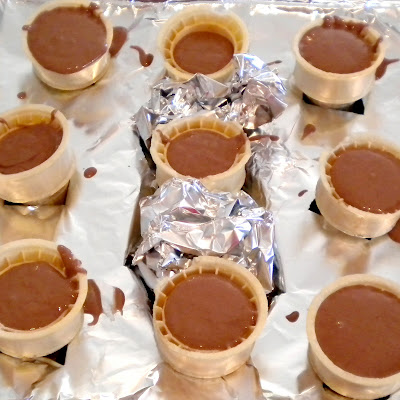 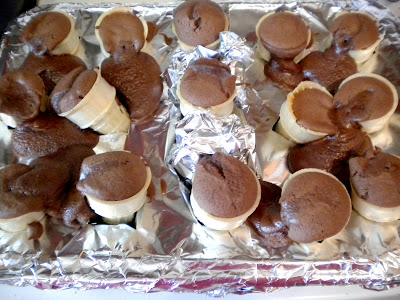 You can just peel off the runners, but it is prettier if you avoid the problem all together.  We ended up with 45 cones so I picked the good ones to take to school and fed the yucky ones to the family.  They were all in it for the frosting anyway :0)
With the other two batches I made sure to leave 1/2" or more head space when filling.  They turned out much better.  Turns out, when you don't over-fill the cones, they don't have a heavy side and fall over :0)
You might be interested to know I mixed 2 cake mixes and had enough batter to over fill the first 15, then still do another 30 cones :0)
I did have 2 cones that had holes in the bottom or something, because the batter just disappeared!
I used the Wilton Chocolate Buttercream recipe for the frosting.  I piped it on using star tip no. 2B.  We topped these yummy guys off with unwrapped dum-dum suckers and multi-colored sprinkles. 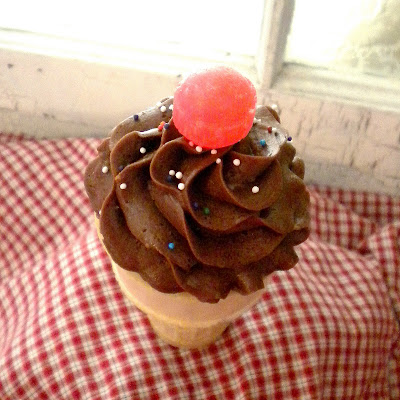 Only one problem, you eat all the frosting before you ever get to the cake!  It can drive an adult crazy, but kids don't seem to care. 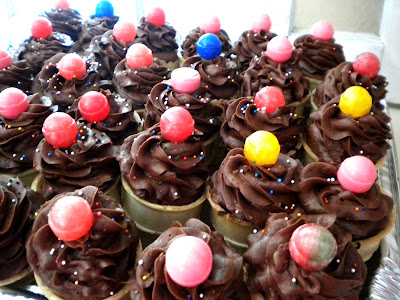 This is probably bad, but I just loaded all the cupcakes back into the pan I baked them in.  Transporting is the hardest part of this project.  I made these with colored cones *Adorable* a few years back.  However, we lost quite a few in the car ride to school.  To avoid the problem this time I used the higher-sided pan, pushed them all the way to the edge so no one could budge, then... 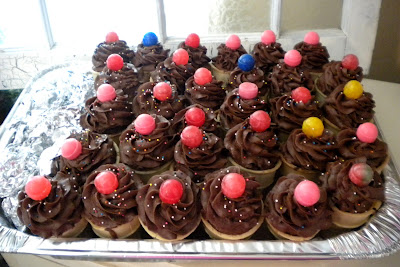 recycled my foil from the baking(after I scraped all the cake off :0) by balling it up and filling in the empty space.  The cones made it to the school, even with my crazy driving, all in one piece!!!
Eli loved it and Emmalee LOVED seeing Eli at school on his birthday!
Happy Birthday Eli!!!
Party plans are underway, you will see more on that in the next week or two.