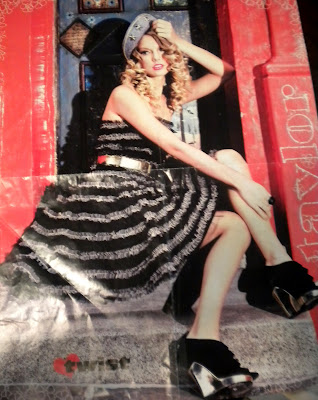 Madison got this poster from one of her tweeny magazines and spent the next several weeks begging me to help her make the dress that Taylor is wearing.  I finally told her that if she bought the stuff herself, we could make it.  What a terrible mom I am.  I really didn't think we could pull it off, so I told her the best bet for cheep experimentation was a sheet from Goodwill.  Since they didn't have any black sheets the Half-Price Saturday we went, we took a total plunge off the deep end and bought black t-shirts.
You must know, I make skirts...lots of skirts, because they are fast, stress free (mostly) and cheep.  I have never in my life...wait, once in my life have I ever put in a zipper.  It was a princess costume when my big girl Madison was 4.  I ended up putting the zipper in inside out so the slide was on the inside of the dress :0)  Making a dress meant that I had to finally conquer my fear and stitch a zip!!! 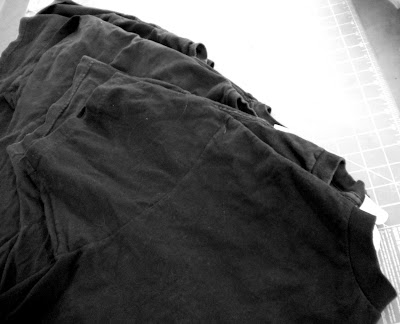 .
Lets get to the gruel- we started with 4 XL and XXL black t-shirts, pre-washed of course :0) 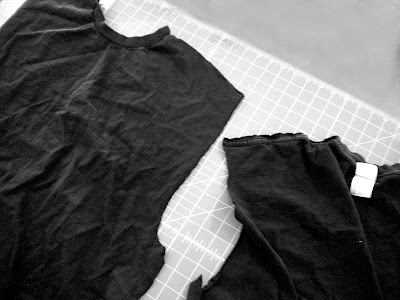 I started my Lamaze breathing then began the top portion of the dress.  First step, cut apart one t-shirt.  I sliced off the sleeves with my rotary cutter, used the same rotary to slice up the sides, then used my scissors to cut apart the top. 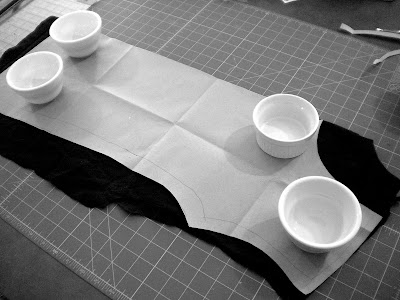 Madison had drawn a pattern of her favorite stretchy shirt on a big piece of craft paper.
*sidenote* I am going to have to make some of those cute pattern weights.  Have you seen them?  I think it might have been in a Joanns ad, and all I think about since I saw them.  My little bowls will work until the day I have time to make a set....Back to work!
Madison traced half her shirt, then we added 1/2" for a little extra stretch-I was super worried that sewing the ruffles on in the end would make the t-shirt not-so-stretchy and then the whole darn thing would be a waste :
Breath, breath, it was only $4.50 in t-shirts...it will be ok :0) 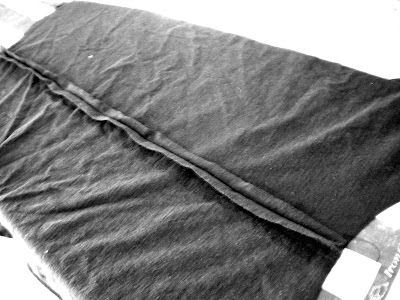 OK, so I cut two of the shirt pattern, then sewed together.  This photo is of the first step of zipper placement. I posted a video tutorial of how to insert a zipper last summer.  I must say-FABULOUS!!!  It really works!  I sewed the zipper area shut... 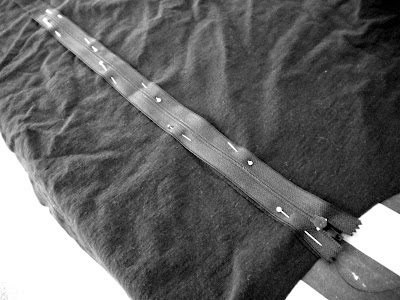 Pinned the zipper in place, then stitched it on.  Once the sewing is all finished, you run a seam ripper down the first stitched seam and open it all up.  The last step is getting one of your minions to pick out all the threads :0)  Luckily that is one thing I am not short on-minions :0) 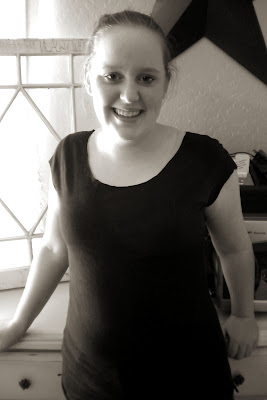 Vwaaaallà!!!  No, I still don't know how to spell that word, but I did make a smack AweSomE replica of Madison's favorite skinny T. 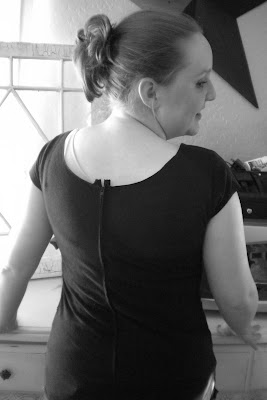 Just look at that zipper!  Yes I still need to tuck in the top and hem around the neck, but it zips!!!
Victory over the Zippa'!!! 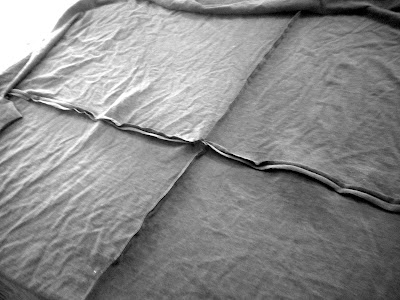 Now for the skirt.  I cut up the sides, cut the sleeves off, and straightened up the bottom with my quilting ruler.  I sewed two shirts together, cut sides right-side together.  Repeated, then sewed the two sets together along the straightened bottom seam.  That was the point where I took the photo above. 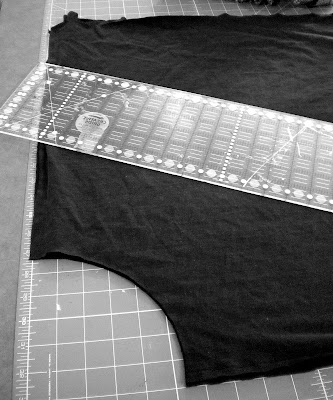 When the 4 shirt sides were sewn together like a 4-square court, I folded and folded so the connecting point of all 4 shirt halves meet at a point-kinda like when you make paper snowflakes.  I cut the connecting point off in the shape of a quarter of a circle.  The idea is that when you open the whole thing up you have a full circle to act as the waist of the skirt portion. 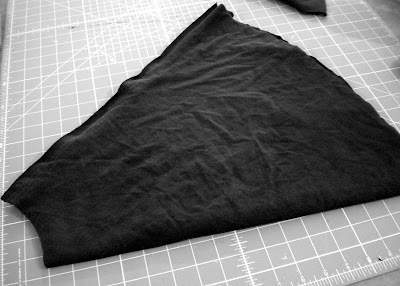 I continued the same arc for the bottom of the skirt, cutting off all the necks and sleeve holes :0)
This technique was actually taken from the making of a circle skirt I have mentioned several times.  I first saw the idea at Made. 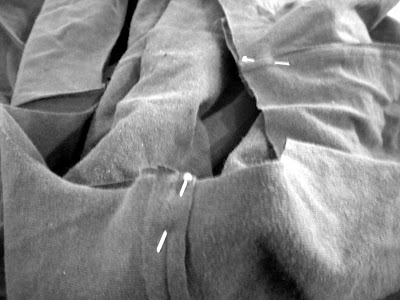 Now the scary part, sewing the homemade shirt to the even more homemade skirt...Hold your breath and say a little prayer for me, will ya? 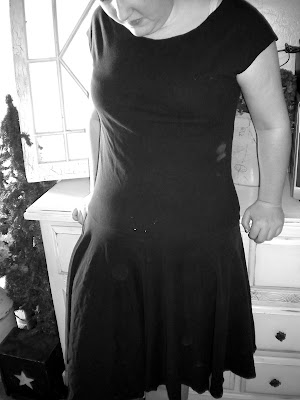 Ta-Dah!!!  Madison came bounding out of her bedroom.  It appears we have ourselves a minor victory in the name of CopyCat Crafters everywhere!!! Mads was all, "I love it so much I am not sure we should do anything else to it!!!"
I take that as a SCORE!
(never mind that white spot on her waist.  It isn't really there on the dress, must need to clean my camera lense :0) 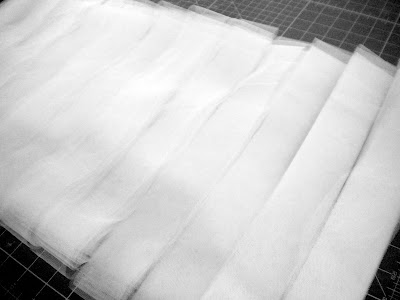 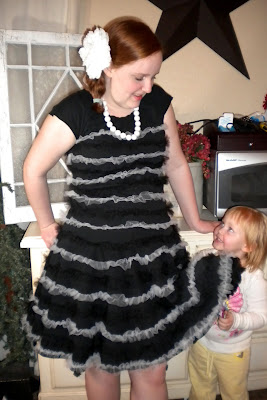 It is Madison Swift, ladies and gentlemen!
We did it!  I really can't believe it.  It took most of my free time on Saturday, but Madison was due for a good hunka chunka mom time :0) 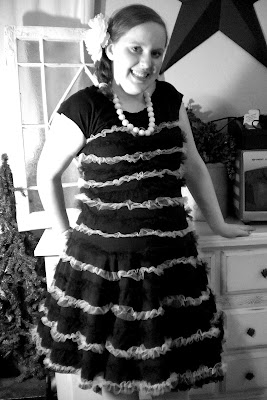 She was so proud of the dress she wore it to church on Sunday.  I am so proud of her I think I might wear it next week ;0)
Happy T-Shirt Crafting!