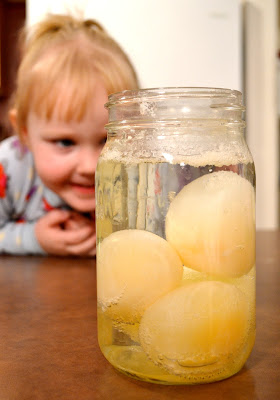 If you are already dangling on the edge of insanity, here is a “craft” for you!  Our Mad Scientist “Egg”speriment was a blast (or *splat* I should say).  I still can’t believe I let my kids do this!!!  Thank goodness for the new, full bottle of Clorox Clean-Up by my side.  That was the only way I made it through :0)
We put four eggs in a mason jar last Sunday, filled it with vinegar, then set them on the shelf.  I emptied the vinegar and added new every couple days.  You see, I got the idea many years ago from the Martha Stewart magazine for kids.  I think was actually the October, 2004 issue.  Yep, that long ago.  We have made the eggs several times, but apparently it has been long enough that my kids can't remember ever squishing them between their fingers.
With it that long since I last made them, I seem to have forgotten the exact instructions :0)  I found my magazine today so we could do a couple more experiments, and wouldn’t you know, I didn’t remember exactly right.  First of all, you are supposed to keep the eggs
in the fridge *kinda important, don't ya think*
Second, they are supposed to sit for 3-4 days…not 7 :0)
Well, they still worked like a charm.  The vinegar eats away the shell after 3 days.
You rinse off what remains of the shell then start playing! 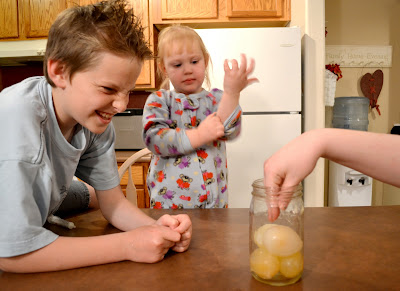 Madison was the brave one.  She reached into the jar like a trooper and egg-stracted the first specimen. 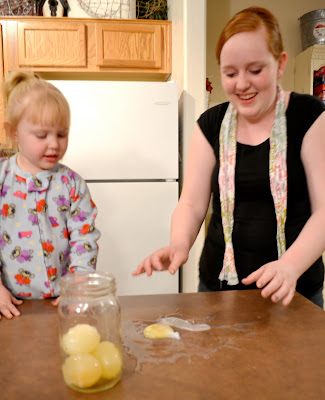 That eggie was short lived though because she dropped the slippery sucker right away...
*SPLAT* 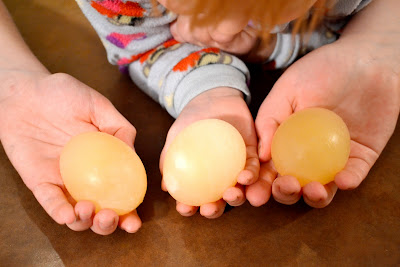 Eli and Emmalee were then ready to give it a try!!!
These eggs were once white with hard outer shells.  After a week in the vinegar they were squishy and watery inside.  They felt like water balloons.  I think they may have been a little more firm if we hadn't left them in vinegar so long, but not much.  We were able to play with them for quite some time.  They do break rather easily so be ready for a mess
if you dare!!! 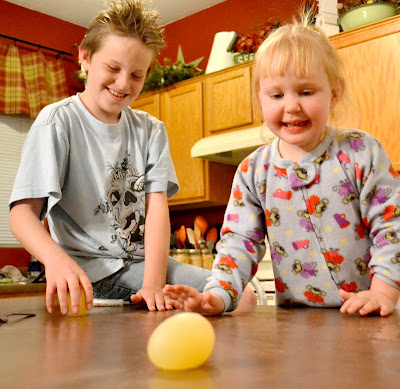 After bouncing the eggs around a bit, the kids started rolling them.  This time the egg came within 2" of the edge of the counter.  Emmalee was having a total ball!  All three of the kids were.  They bounced the eggs all over the counter.  Screams and shrieks of delight rang through the house each time an egg came close to the edge.  I have to admit I was getting more and more anxious each time they neared the drop-off :0) 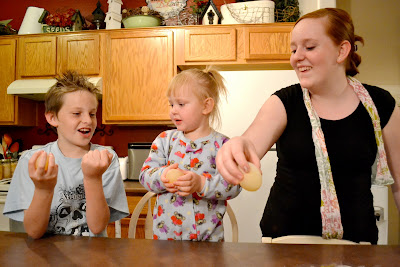 Finally mom couldn't take the anticipation of egg all over the floor any longer.  I told them the Egg-speriment was about to end. The kids began debating how to crack their eggs.  Eli tried to convince his sisters to squish the eggs in their hands so the insides would ooze between their fingers and down their arms... 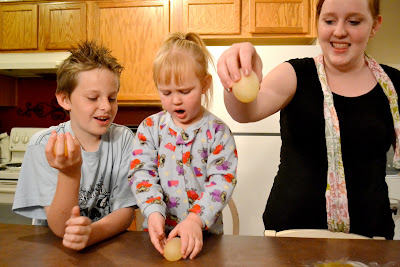 Emmalee wasn't a fan of that idea.  She wasn't ready to say goodbye just yet. 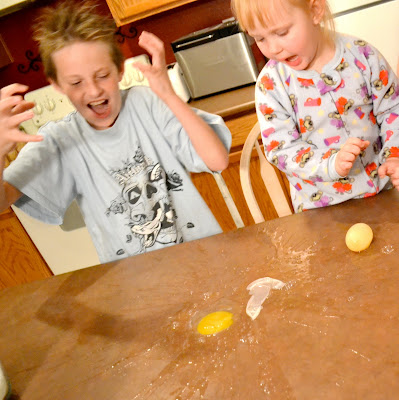 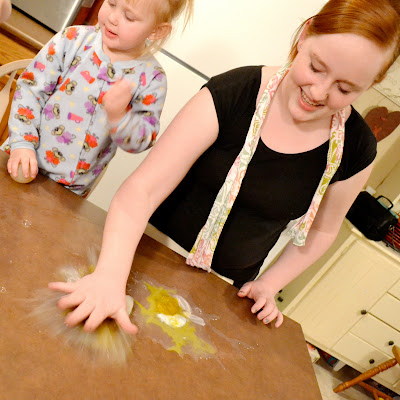 Madison decided to go for squashing it with her palm...
***POP*** 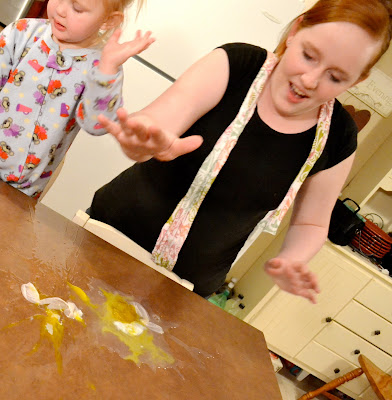 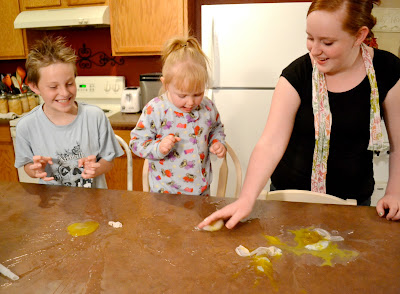 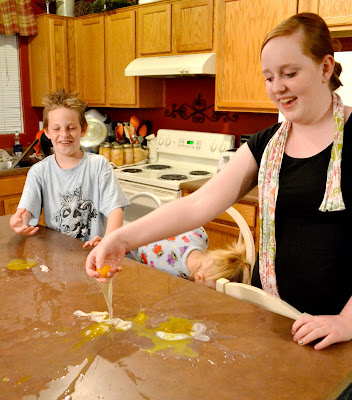 Emmalee quickly excused herself from the mess... 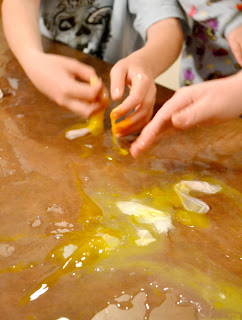 Madison and Eli on the other hand, I had a hard time getting them away :0P  Yuck!
Talk about pushing mom over the edge!!!
That was one mess that was rather hard for me to swallow (as a germ-a-phobe)!
I pulled out the Clorox Clean-Up and scoured the kitchen, top to bottom
***Whew***
I feel much better.  The kids laughed and talked about that "Egg"speriment all night long!
We actually did several others too.  I will be back tomorrow to show you how they all turned out.
Oh, and by the way...
Don't forget to get your messy kitchen photos submitted to Clorox by Tues!!!!
The Cook Up A Mess In The Kitchen photo contest, sponsored by Clorox Clean-up and TheMotherhood.com, ends March 29th!!!
Grand prize of trip for 4 to NYC is waiting for you!
See you tomorrow :0)

Email ThisBlogThis!Share to TwitterShare to FacebookShare to Pinterest
Labels: Crafting with Kids