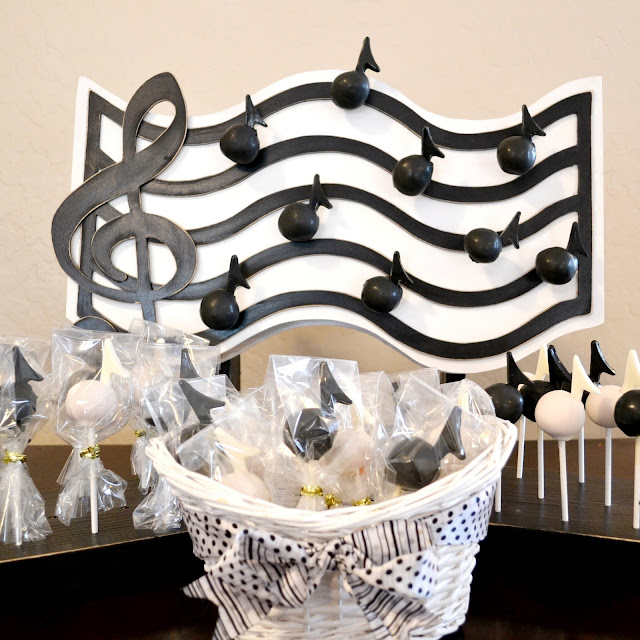 I am thinking I have too many musical friends :0)  So Just Kidding!  My sweet friend Jennifer is such a doll.  She says she needs some little thing, then sits back and lets me run.  She is an amazing piano teacher and had a Keyboard Festival this weekend.  Originally she was thinking cake, but then figured cake pops would be fun.  She only requested 20 or so, individually wrapped, but the dough made so many cake pops, I just couldn’t waste it, right!?!

The idea to make the cake pops into music notes was simply too tempting.  I had to give it a try.  I will tell you I have never had stellar success at cake pops.  I actually prefer making cake balls, but never get that perfectly round, smooth finish like Bakerella.  I think I may have figured out her secret though…Photoshop :0)  It is amazing how perfect that creamy milk chocolate can look after a little touch-up…Oh yeah baby! 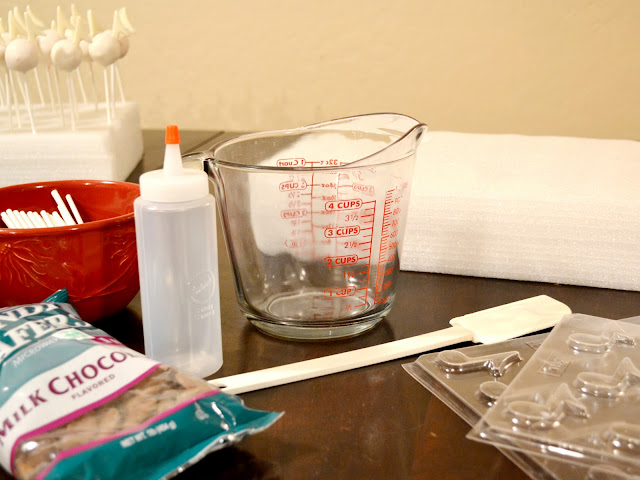 Even still, I was slightly impressed at how well they turned out this time.  Here is how I made my notes…
First step, make the stems!  I found these chocolate molds at the ABC Cake Supply in Phoenix. 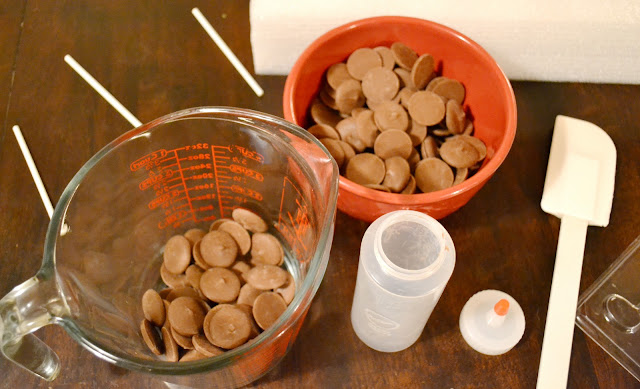 I tried the squirt bottle for the first time with this project.  It worked like a charm.  Since I have a slight plastic-in-the-microwave phobia, I melt my chocolate in a measuring cup, then pour into the bottle.  They do say you can just throw them in the plastic bottle and toss the whole thing in the microwave to melt. 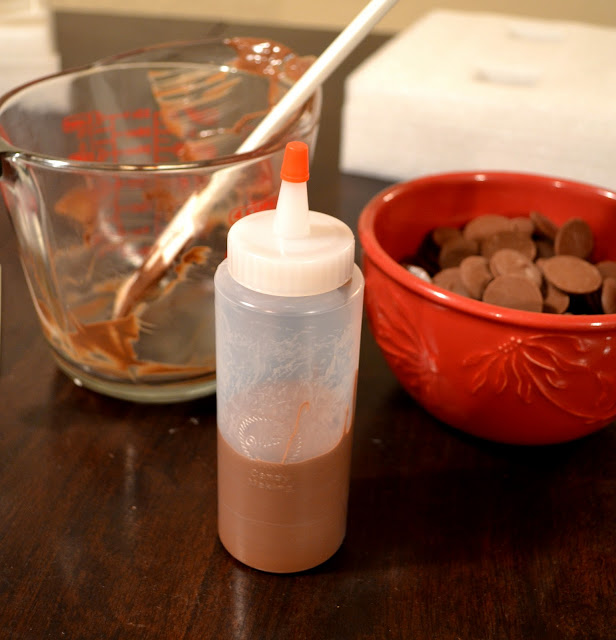 So pour the chocolate in there, or the other way if you want... 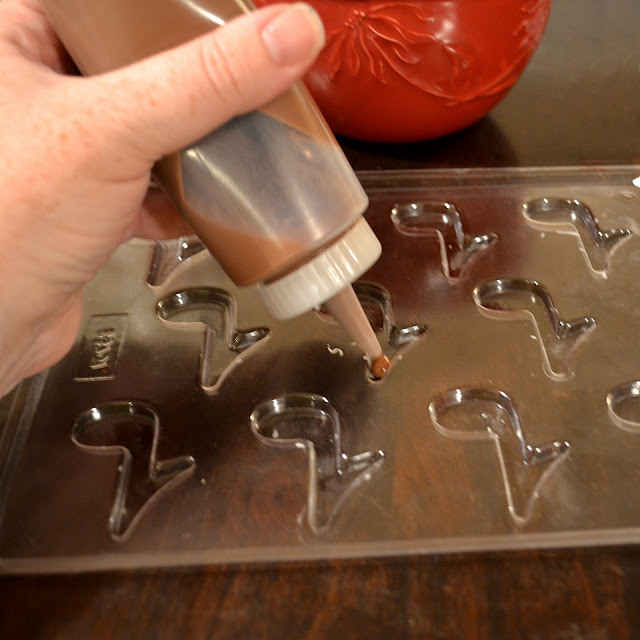 The squeeze bottle was super nice!  It wasn't even that hard to clean.  I wish I would have known about these little guys a few years ago!!!
Fill the stem, but not too full, and stop before you want the chocolate to stop.  Pick up the whole tray and bang it on the table a couple times-nice and hard.  You can look underneath to make sure there aren't any bubbles sticking around.  If you got them all out, add just a little more chocolate to the stems and put in the fridge.  They harden up in 10 minutes or less.  I did this whole process with two pans before I realized I forgot my black food coloring!  Super BIG NOTE* don't use regular food coloring with chocolate!!! You will end up with a huge clump of clumpy chocolate, called distempered chocolate I think, that you will have to toss in the trash.
I purchased a couple colors of candy chocolate at Joanns, but had to hit the cake supply store for my black for the notes.  DO NOT USE ICING COLOR!  It has water in it also.  If nothing else, make sure your coloring is oil based-trust me! 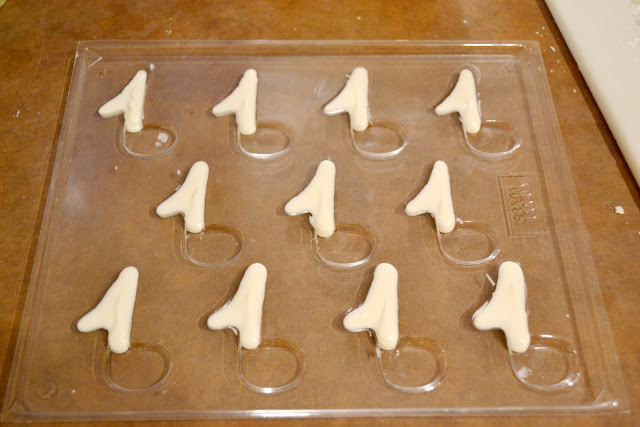 Pop those babies out of the tray.  You can trim any excess off with your kitchen scissors if needed.

Here is the quick version since I have shown these on the blog before...
Make cake pop batter...cool in fridge till cold...dip sucker stick in chocolate and shove in the business end of the cake ball...back in the fridge for a few minutes...melt chocolate, but don't dip when hot...

I think this is really the secret to a nice smooth finish.  I noticed the pops that were dipped a little later when the chocolate was more room temperature were much prettier!

While chocolate is still fresh, grab a note stem and push into position...stand in a piece of Styrofoam or cake pop stand...Done! 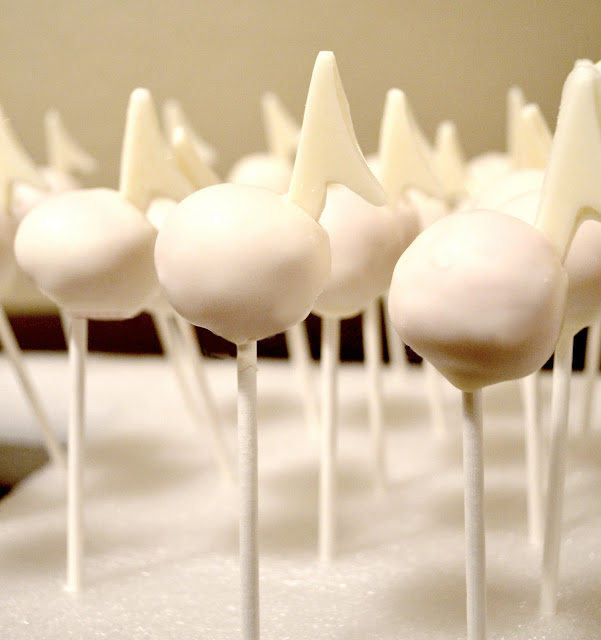 I lied about these ones.  I used almond bark because I was too embarrassed to send hubbs back to the store when I realized I forgot to add the white chocolate to the list.  I used one of my emergency blocks of almond bark (yes, I have started to store almond bark for those last minute emergency treat demands) and everything turned out fine.  I will say you can tell a difference in color due to the fact my cake pops are strawberry, and as such-PINK.  The stems are a solid white, the pop, slightly pinkish deep down unda'

I would strongly recommend using cake the same color as the chocolate you plan to dip with.  No, that isn't a rule somewhere, but you will get a much more professional result if that is what you are going for :0) 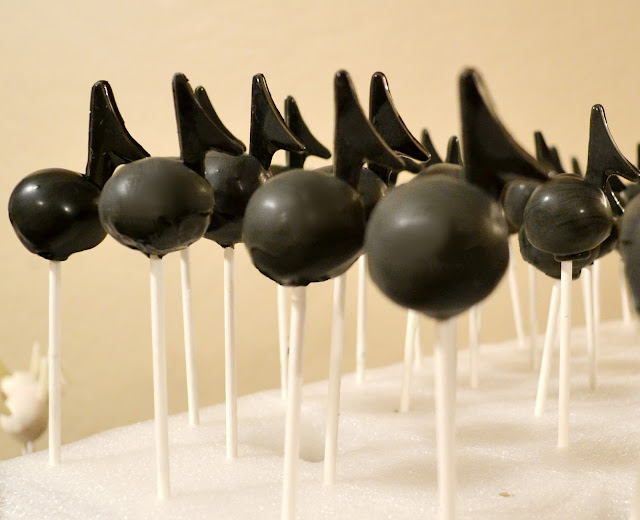 Black...And so are your teeth :0)  Just keep that in mind since it takes like a 1/4cup of black coloring to dye chocolate melts black.  Still tasted lovely though :0)  I used Oreo pop batter instead of cake this time.  How do you do that?  I crushed a bag of Oreos with my Pampered Chef chopper until the cookies were just crumbs.  Threw them all in a bowl with a block of softened cream cheese.  Mix ( I use my hand mixer because I am lazy-they say to do it with your gross yucky fingers :0)
Ball and dip as usual. 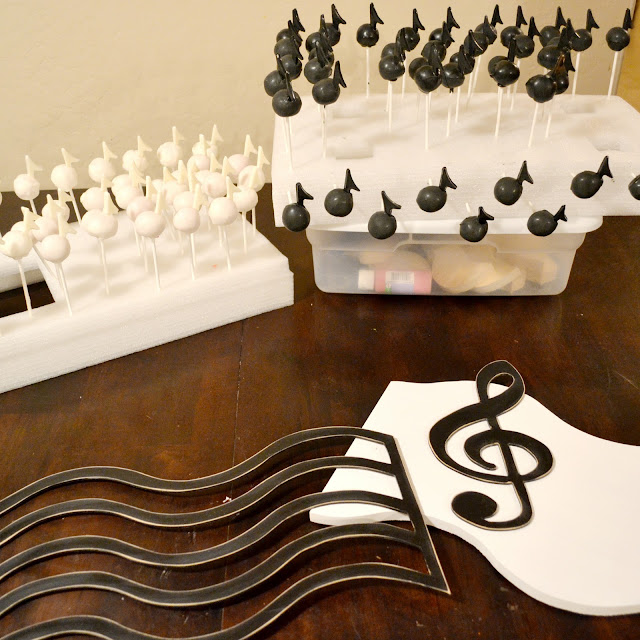 Because I was trying out a design for a stand, I made some black pops vertical, and some horizontal.  I made use of the packing foam the computer came in, making it my pop holder until I was ready to decorate. 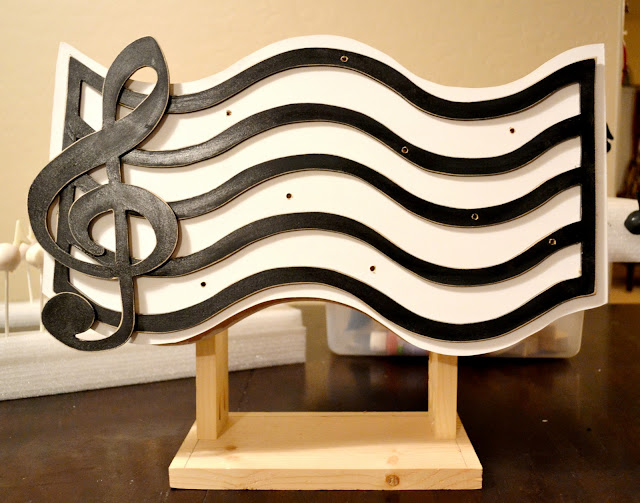 Hubby came up with the stand part.  I took masking tape and moved 9 little pieces around until I had the positioning for the holes. 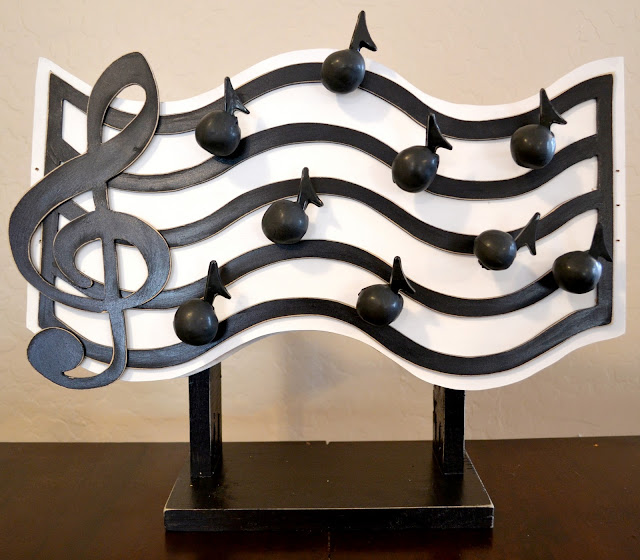 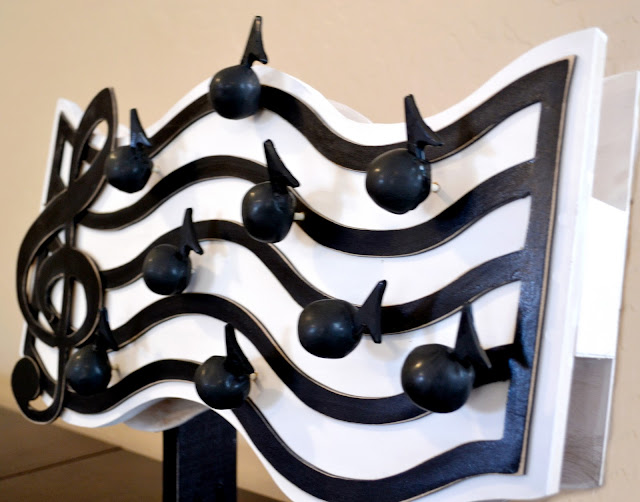 I wanted to be able to control how far in the cake pops went, so I added a board to the back.  It was just far enough away that the pops stood out from the front enough to grab them for a snack :0) 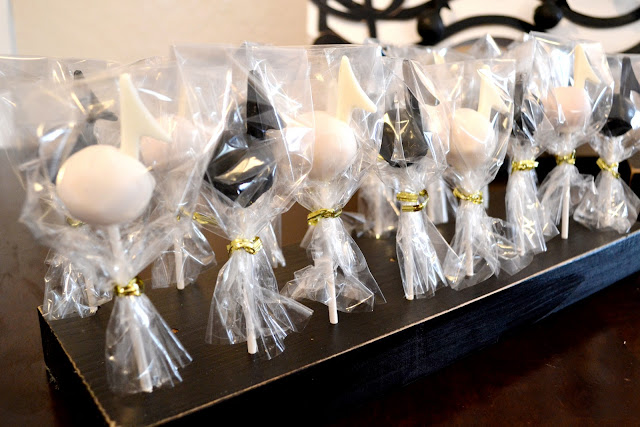 Here are the wrapped pops.  I made two stands out of a 2x6 scrap of wood-about 16" long.  I was able to drill 3 rows of holes, 8 holes in the first and last row 2" apart, 7 in the middle.  I drilled the front and back rows 1" from the front and back edge, then put the middle row, you guessed it!  In the MIDDLE!

I bought the small "Oreo" bags and the gold twist ties from the cake supply, but I think you can get them at Walmart, Michael's, Hobby Lobby, or Joanns. 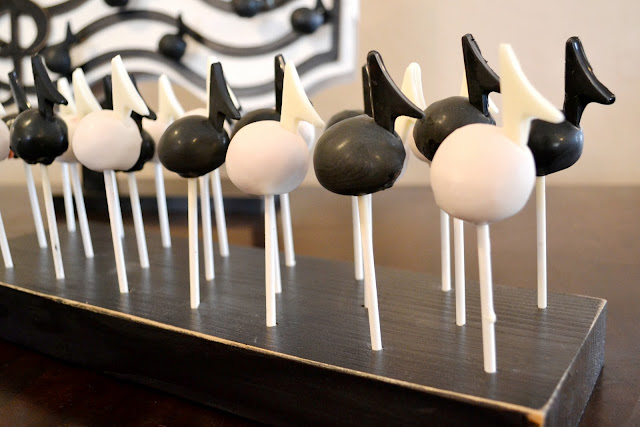 My unwrapped pops!  You never know, the parents might want some too! 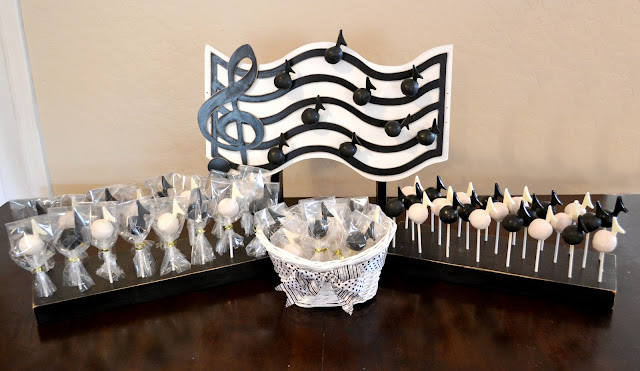 How is that for a musical treat!?!
I don't mean to toot my own horn or anything, but I think it worked!
Now, how about a cake pop stand in the shape of a flipflop?  That is weird...
How about a cupcake?  Then the pops can be the sprinkles :0)
I better try it!