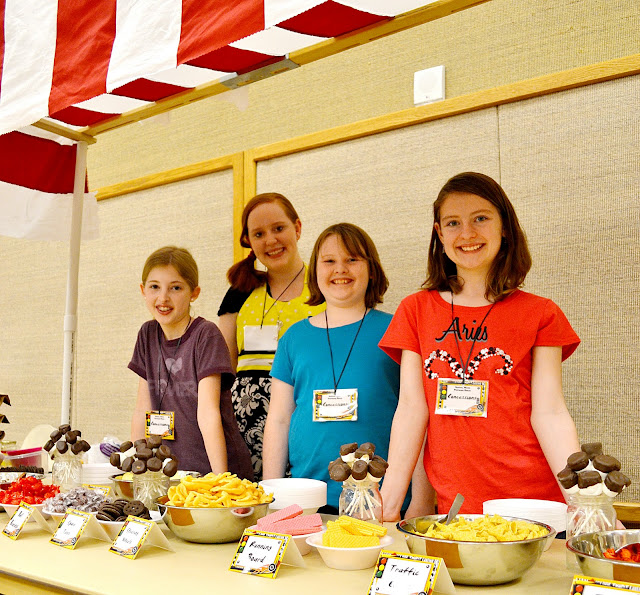 Here are the lovely ladies that helped with our concession stand at the Pinewood Derby this year.  I was in charge of the stand, creating, staffing, and filling it with goodies.  I did a lot of the same things as last year, and a few new things as well.  I used my quilting frame on top of the table to set up the canopy again.  Last year I just draped it with sheets, but I wanted to take it one step further this time.  I made the red and white striped canopy from a queen sized sheet and 2yds of red fabric.  The canopy ended up just big enough to cover the quilting frame when set up for a king sized quilt.  The whole thing was a little short last year, so since my quilting frame is the kind with legs made from PVC pipe, I bought 2 foot extension pieces from Home Depot and made the whole thing a little taller.  Madison really appreciated this since she has grown two feet over the last year too :0)  Next year, assuming they want the concession stand again, I will cut the two front legs down a foot so there is a slope from the back to the front.  Also, I wanted to scallop the canopy but ran out of time.  I hope to have that done for next year as well. 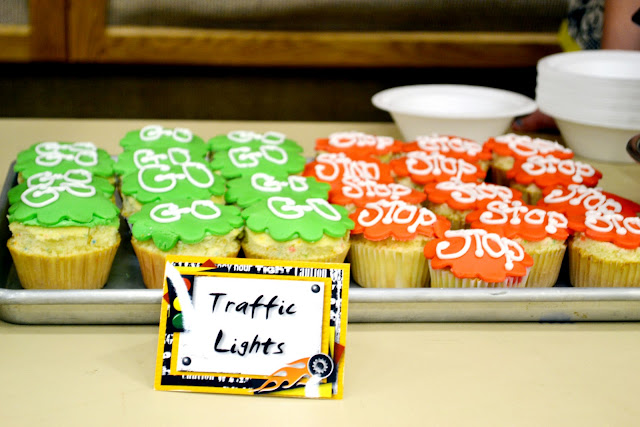 I tried to think up treats and snacks that could resemble car parts.    I tried to keep the home-made things to a minimum since I have been so short on time, and while we are being truthful, to save on cost :0) 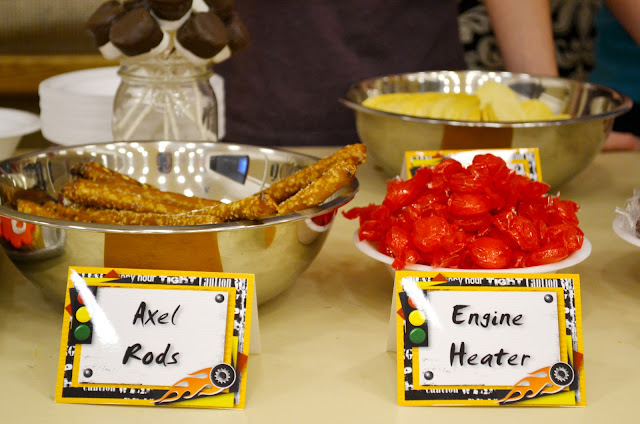 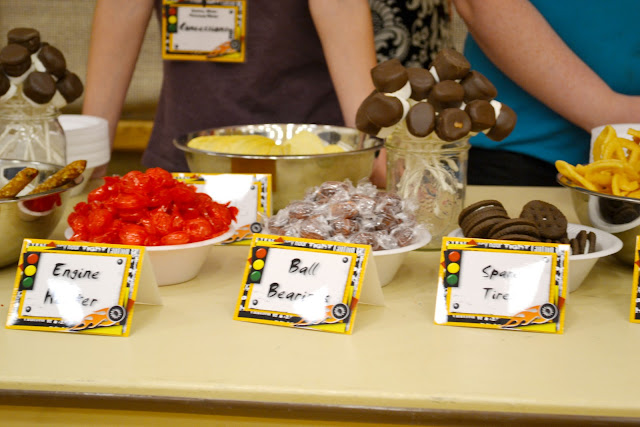 I made the place cards with the same design as the pit passes.
We started our races at 6:30, but waited until 7:00 for the concession stand to open.  We had all the kids (big and small) line up behind the stand and handed everyone 3 tickets (bought at walmart).  The popcorn was free, everything else had a serving size based on how much of it we had.  We also added NACHOS!!!  I was really excited about that!  I was told if we had nachos, we had to have jalapenos, so of course, we delivered! 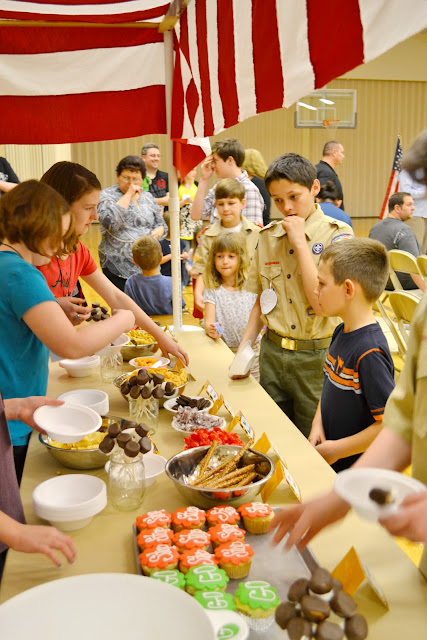 We had quite the crowd, but the girls really kept up :0)
We took a pile of food for the racers over to them so they would stay in their area and not come up MIA when it was their turn to race.   Speaking of the racers, here is the layout we used... 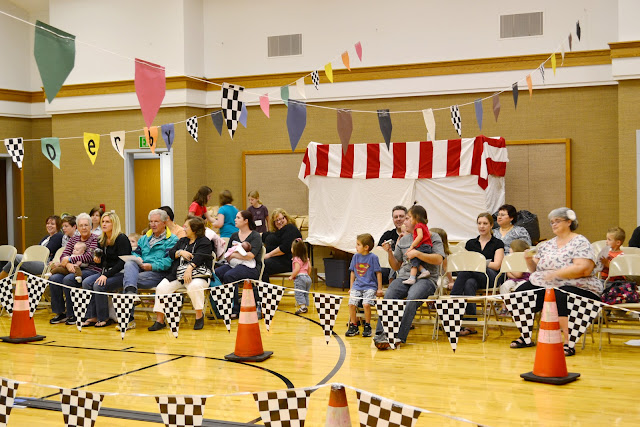 Parents on one side of the track.  We get the traffic cones from the local city streets department every year.
The flag banner on the cones works great to keep other little kids off the track during the race.  The pennant banner was made by a parent in another unit.  I made one out of fabric but didn't have the heart to take this one down when I saw it :0)

We put a projector up on the stage with our score keepers so the families can see the running totals.  Our pit crew consisted of three adults with lists of the races rounding up boys to keep things moving quickly.
Mr. Sew*CakeMaker called out names, one den leader would shuffle to the cars, another would have them move to the holding site ready and waiting to move into position for the next race.  We would get them out of their seat and into the process something like 3 races before their turn.  You would be amazed how many rounds you can get through when you get organized like this! 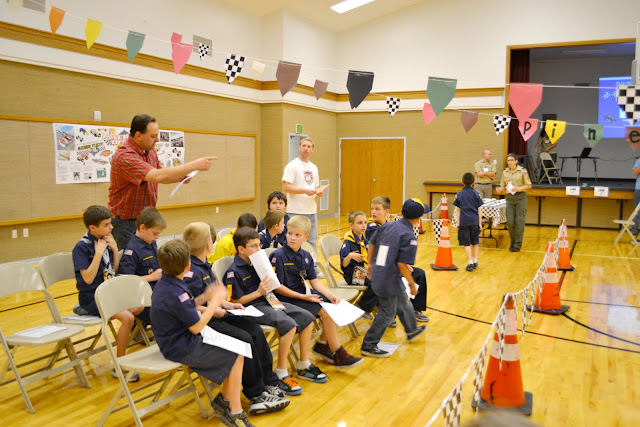 Racers are located on the other side of the track in the "Pit", thus the need for the... 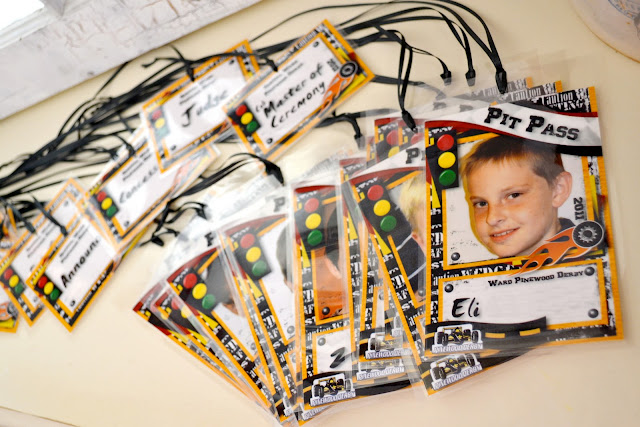 Pit Passes!  I made the staff passes too and laminated the whole lot on my new laminator.  I ended up buying that one from walmart, Scotch brand for $25.  The lamination was $3 for 20.  I figured it would be cheaper to buy the thing than to pay what Office ---- was charging :0)  Now I am ready for next year! 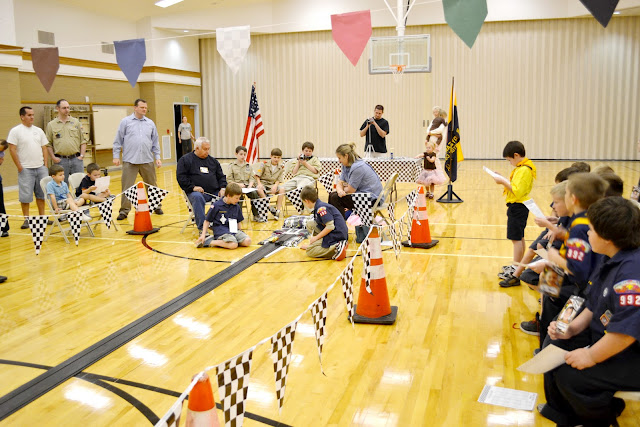 Down at the end of the track we have the judges in their own partitioned-off seats for their own safety :0)
You know the derby can get rather intense! 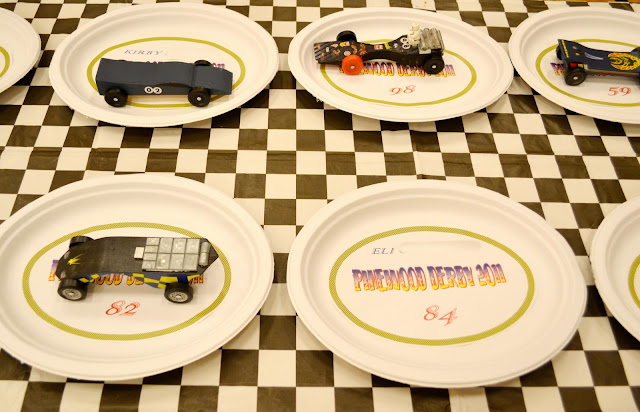 The cars are kept in the roped-off area, picked up at the beginning of a race, dropped back off at the end, to minimize mishaps and disappearances :0) 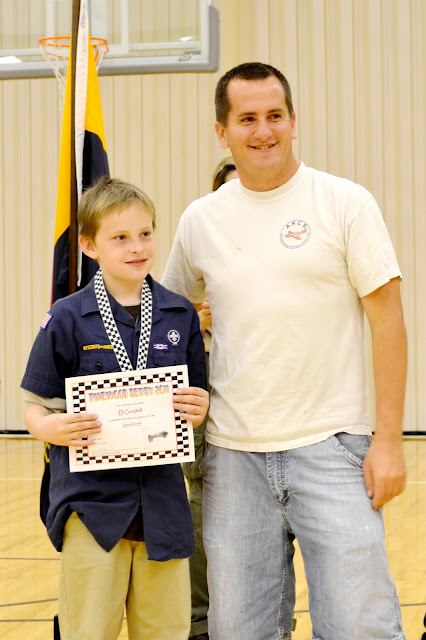 Eli didn't win as many races this year as last, but he sure had a blast.  I love that with all the stress over building the perfect car, I didn't see one single boy crying over a lost race!
They were just having a great time and enjoying them moment. 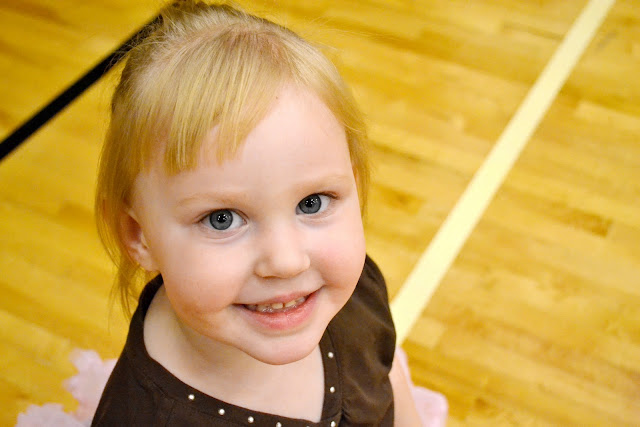 This photo has nothing to do with the derby, other than the fact that Emmalee also thought it was the best party EVER!  I just can't get over how clear a picture I get with my new camera.  Scott got a new built a new computer with his portion of the tax return money.  I joke with him that it is like a new girlfriend for him.  Now that I have my camera, I call him Nikoli (Nikon), he gives me a hard time.
Sometimes I share, other times...Not :0)

As requested!!!  Files for download available HERE with Dropbox!

Also check out my Black version made in 2012 HERE!

Download any or all, then have printed up like a photo from your favorite photo center.  You can write on them with ball point pen or permanent sharpie, or use photo editing software to write and add pictures.  Please let me know if you have any questions!!!
vanessa.cam5@gmail.com