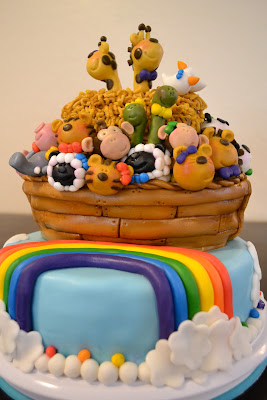 A friend of mine asked me to make a Noah's Ark Cake for a baby shower.
After scavenging through photos on the web I found this... 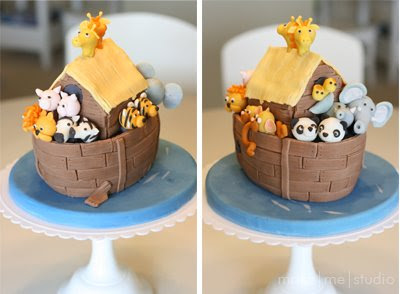 Cake at Make Me Studio.  How cute is that!
After a little more searching, I found these animal heads... 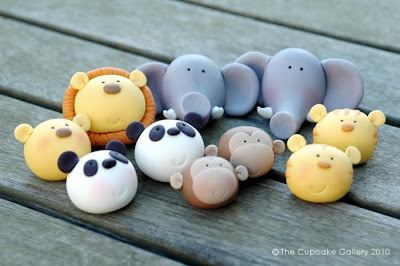 From The Cupcake Gallery.
I fell head over heals for these darling little balls of sweetness.  They are cute as well as simple...or at least they looked simple :0)
Here is a quick version of how I made my copycat cake...
I baked a 11x17" sheet cake.
I wanted the ark to be tapered as it got closer to the bottom so I made two ark patterns, one larger piece for the deck, then a pattern 1 1/2" smaller for the base.  I cut 2 of the bigger, deck patterns out of the sheet cake. 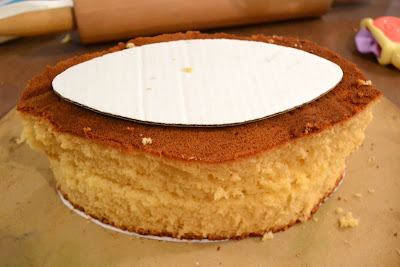 Once cut, I stacked the cake pieces on top of the large pattern, and laid the smaller pattern on top of the cake stack.  I trimmed away the extra cake making sure my knife was angled while I cut. 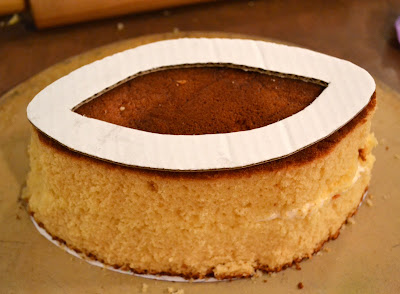 Last minute I decided to cut a hole in the center of my cake cardboard foundation so that I could dowel the cake for sturdiness and not have to fight the cardboard to get into the cake below. 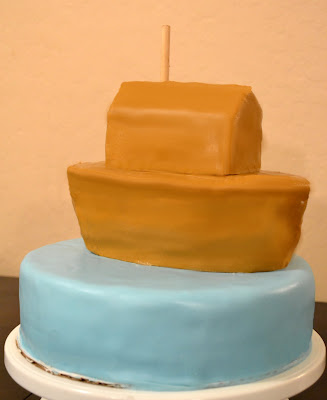 I covered a 10" cake with thin frosting, then blue fondant.  I iced my ark pieces, then covered them completely with fondant.  After envisioning all the wood pieces falling off my tapered ark, I decided to cover the whole thing with fondant first, then add the other decorations.  It was sure a good thing I did. While I am sure it made for a lot of frosting, the base piece of fondant kept my ark together when I added all the heavy animals.  I added the two dowels from the top of the ark for stability. 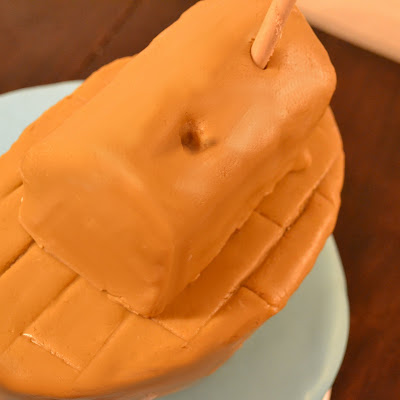 There are very many nightmarish scenarios that run through one's head when making a cake for someone else.  You hope that the cake stays together, doesn't taste like dirt, that you don't drop the thing when carrying it, that the toddler will not run a pudgy finger through the freshly applied frosting.  Those are only a few of the nightmares.  I find transporting the darn things one of my biggest stresses.  I like to add dowels when possible to keep parts from sliding right off the cake's base. 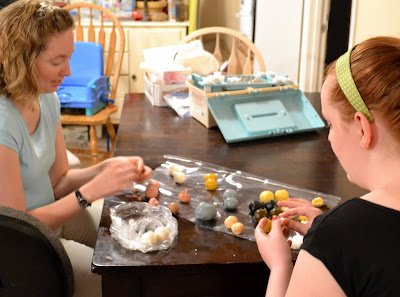 I think it was about 10pm at the time I took this picture.  Here are my two helpers for the evening, Lindsey and Madison.  They were busy mixing fondant and rolling little critter heads while I worked on the ark.
These two were troopers.  We started at about 6pm.  Madison and Lindsey worked until about 2am.  I kept going until 5am, then stopped for a small snooze before getting back at it this morning.  I figure this cake took me about 15 hours, not counting mixing and baking the actual cake.  It took me another 2 hours to clean up after :0) 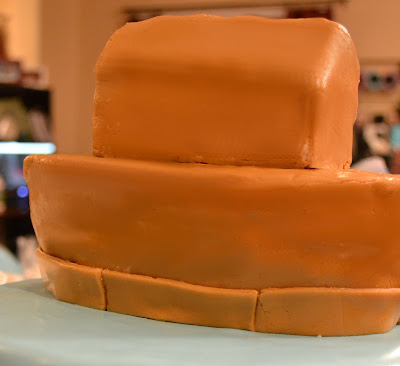 Here is my first row of wood planking.  I rolled the fondant out, cut strips, cut the strips into segments, painted the back of each segment with corn syrup, then put them on the ark. 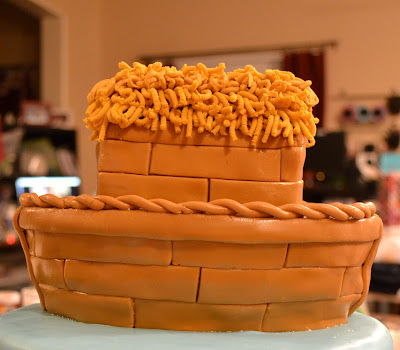 I added a rope around the deck, and used a brand new clay extruder to squeeze out the hay-style roof for the ark. 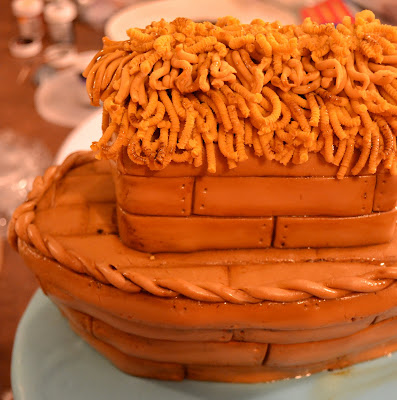 You know me and shading, right?  Can't live without it!
I  mixed a small amount of brown icing coloring with a small amount of corn syrup and a few drops of water.  After mixing, I painted all the areas of the ship that needed a little depth.  I soooooo love the look of the shaded wood!  Nail holes were poked with toothpicks. 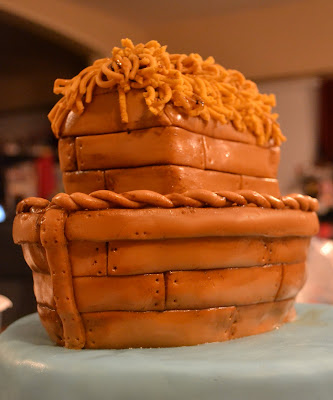 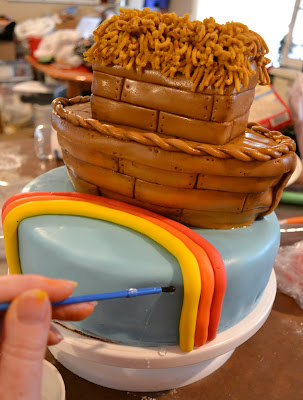 Given the fact it was a Noah's Ark cake, I simply had to add a rainbow.  Again paining on corn syrup first, I made ropes of color and applied them to the cake.  I also cut clouds out of white fondant using a little flower cookie cutter.  I found that if you roll the fondant out thick, then cookie cut, then roll with the rolling pin you can get a variety of shapes that all look similar, but add variety.  I used that idea on the eyes of the monkey you will see down below. 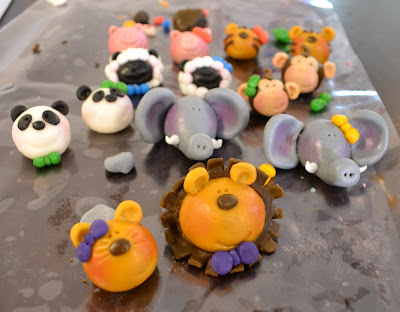 Here are our little animals.  They were so very fun to make.  Madison made all the bows.  It was pretty tough to decide which animals to make.  We finally settled on lions, tigers, panda bears, elephants, monkeys, pigs, snakes, doves and giraffes.  I really wanted to make zebras too but there just wasn't room :0) 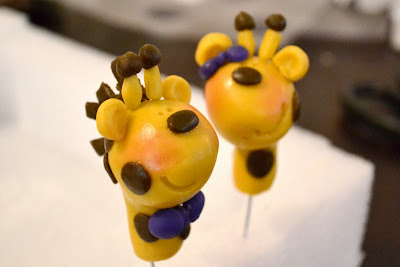 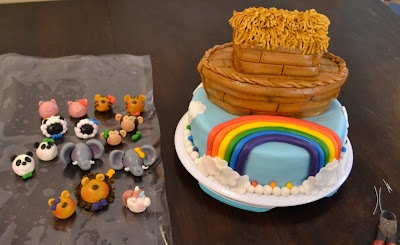 Here is the cake decked out in it's rainbow and border. 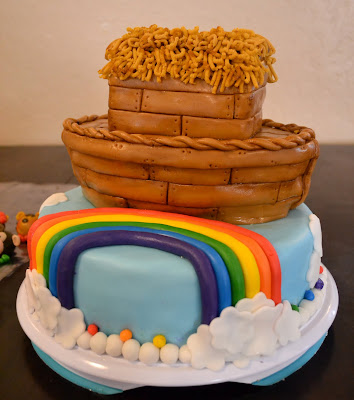 I thought about making the bottom cake water, but I could not resist the rainbow.  You know, we actually had rain today and got to see not only a rainbow here in the valley, but a double rainbow.  Emmalee was so impressed she spent the rest of the night showing everyone how she could make a rainbow with her legs.  The talent that flows in this family is simply astounding :0) 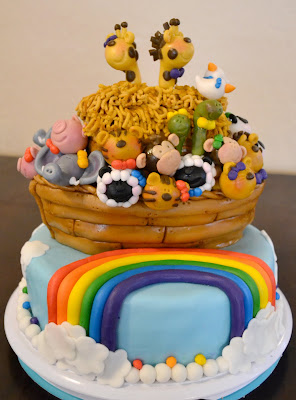 Ta-dah!  That is one crowded ark!
I seriously think the monkeys are my favorite, but the giraffe's come in close second. 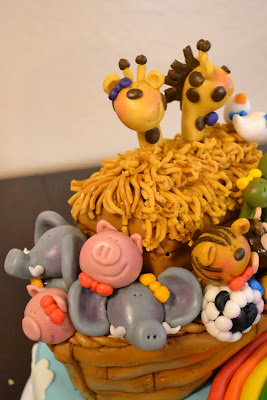 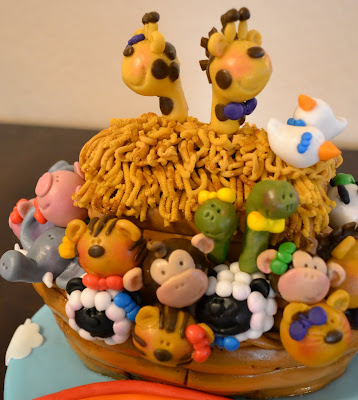 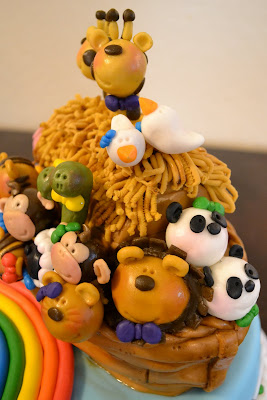 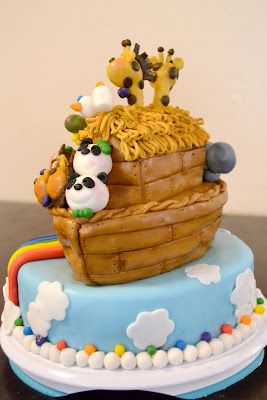 I ended up leaving the back side kind of empty.  I loved each and every animal so much I just couldn't decide which one to hide on the back.  Finally I figured out how to fit them all on the front.  Sadly, we had a minor tragedy on the way to the baby shower.  It was only a couple blocks from my house, but things slid. I parked the car, ran around to the passenger side to grab the cake from Madison (Official Cake Keeper) and nearly screamed.  All those chubby animals hanging out in front made our ark lopsided.  I started pulling little critter heads off left and right.  Madison just sat there in the front seat, cake in lap, critter heads in hands, holding the poor dears while I switched and moved all the animals to keep the ark from breaking.
That was stressful.
We managed to work quickly enough, there in the driveway, that we saved the ark and all the animals on board.  Here is a photo of the cake at the shower... 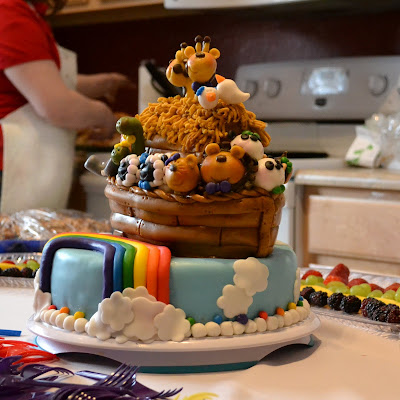