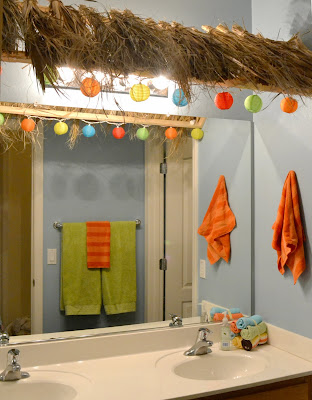 I had all I could take of the terrible paint job in the hall bath so I repainted it myself.  I found some fun towels and washcloths at Target one day.  That lead me to the purchase of my first store-bought shower curtain, That purchase lead me to a surfer theme for our bathroom.  The only natural progression from there was a Tiki Hut over the sink :0) 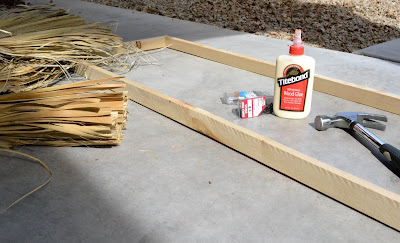 It was love at first thought when the Tiki Hut crossed my mind.  However, I was concerned with letting enough light around the room...and my husband mumbled something about fire hazard, blah blah blah :0)
That is when I came up with the shelf idea.  I could let the light shine and not have the grassy stuff so close to the hot bathroom lights.
I made a very basic frame out of 1x2" boards.  It was 16" tall, then as long as the opening in the room.  I screwed the boards together and started on the palm roofing. 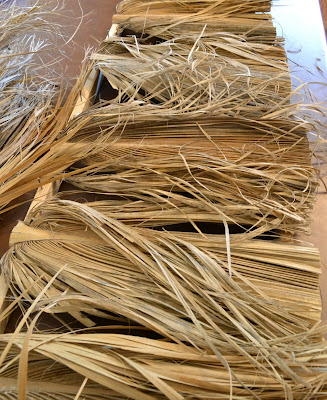 Originally, I was going to use raffia as the roof.  I was trying to figure out how many packages I would need to buy to make it all the way across the frame and exactly how much that would cost when the next idea struck.  Why not use REAL palm leaves!!!  Ahoy!  I bet that was what people really used to make tiki huts!!!
I managed to acquire 8 palm leaves and took them home for the project.
I cut the long branches off with my scroll saw.  I wrapped tape around the bottom 18-20 " of each palm branch (the grassy looking part) and cut the portion off, setting aside for later.  Then I cut 16" portions from the top of each branch, right where the leaves start to form.  I used this part of the palm as the first layer of my tiki roof.  I spread them out across the frame and nailed them in place.  The palm branches are very fibrous and thick.  They have a very grassy smell to them too.  It was kind of fun to play around with the stuff.  I imagined myself stranded on a desert isle with nothing better to do than build a hut to rest under when I was tired of working on my tan :0)  I managed to hold on to that daydream fairly well in spite of the cries from my 2yr old wanting snacks, drinks, and "more Wonderpets!" 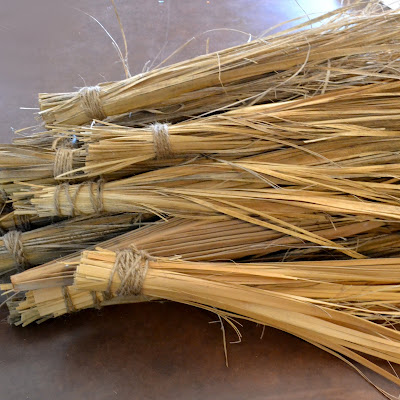 The bottom palm portions were tied individually with jute.  Next I spread them out across the first layer to fill in any gaps.  I used more jute to weave in and out between the bunches, securing them to the frame as I went.
This was were I let my mind drift to coconut oil smelling sun screen and virgin pina coladas.

The problem with taking pictures of the bathroom is that no matter where you stand, you really can't avoid getting yourself in the shot :0) 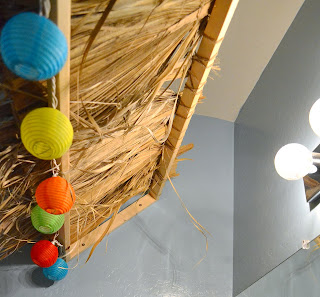 Here is what it looks like from underneath.  You can see the roof is plenty far away from the lights for the fire-hazard thing and to let light up to the ceiling.
I found some paper lantern patio lights at Hobby Lobby (on sale this week-Yay!)  They really were the finishing touch I was looking for.  I secured them to the frame with thumb tacks. 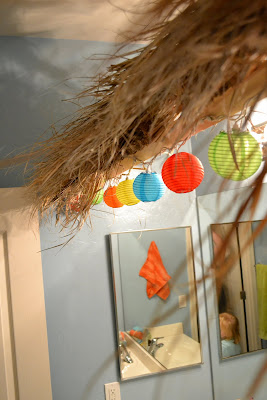 The funny thing about this picture was that I was so happy not to be in the picture in any of the mirrors, I didn't even notice the grass right in front of my camera.  Anyway, we love, Love, LOVE the new look in the bathroom!  The kids are just crazy about how fun and exciting it is in there.
Here is what it looked like before... 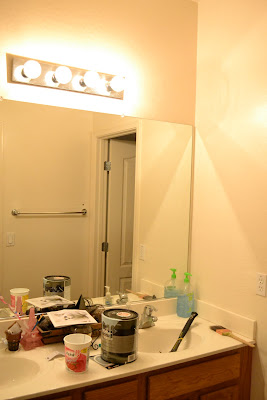 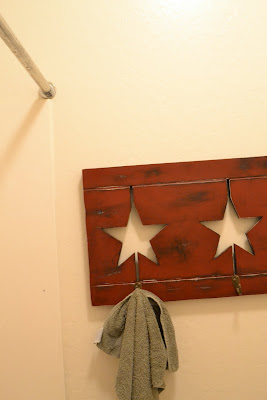 And here is the new and improved... 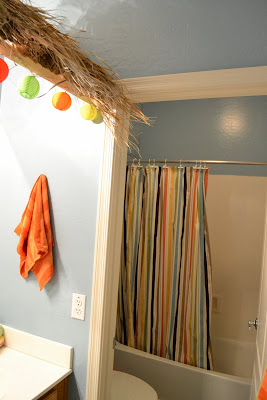 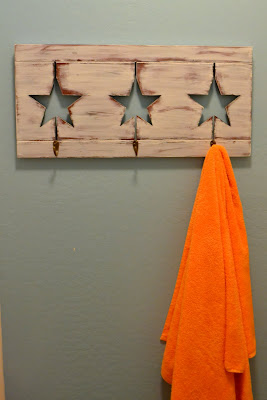 The funny thing about this shelf is that it started out white.  I went cowboy with the bathroom many years ago and painted the shelf black, then red and distressed it so the black would show through.  Now that we are going surfer/beach, I think the white on the red in a white-washed look is awesome and fits right in! 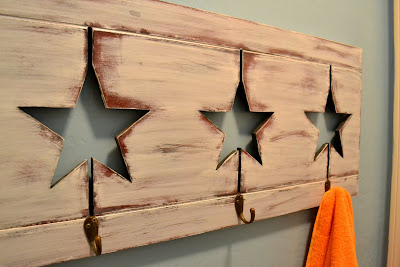 Now, way in the back of my murky brain lies a filing cabinet labeled Hall Bath.  These are just a few ideas I pulled out of there.  Over the next couple weeks I will hopefully find time to make a few more, and in the end, come up with a finished room.
That would be crazy, don't you think?  I don't believe I have ever really had a "finished room" but I am sure willing to try!!!

This project was linked up HERE: Email ThisBlogThis!Share to TwitterShare to FacebookShare to Pinterest
Labels: All Me, bathroom, Painting