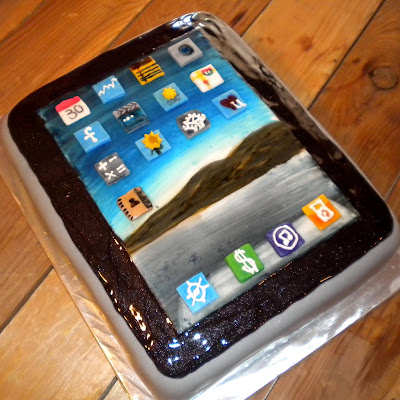 My friend asked me if I could make this cake for her wedding anniversary.  I looked at the link, groaned, then said, "I can give it my best effort."  I took all three Wilton cake decorating classes as a way to get out of the house after my Eli boy was born.  One lesson was on how to make a fondant cake.  That was the last fondant cake I ever made :0)  To say the least, I was a little worried if I could do it.
I had seen a recipe for marshmallow fondant floating around all of the recipe sites.  After finding this tutorial, I decided to try it.  I have to say it was VERY successful.  My big argument against fondant (that it tastes terrible) has been dispelled!!!!  It is also rather cheep, coming in at $4 a cake to frost!  How 'bout them apples, I mean cakes :0)
I covered the cake with buttercream frosting, then rolled gray fondant, then with the rectangles that made the screen.  I used my icing coloring paste as paint and painted on the background.  The darker colors I used straight paste, the lighter, I mixed the paste with water.  I actually really enjoyed this part. 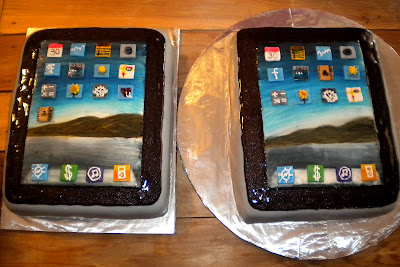 Dare I say that while I was making one, I might as well make two!?!  I baked the cake in a cookie sheet, intending to cut in half and stack one side on the other.  My cake ended up too thick to stack, so I had two cakes instead of one.  Surprise!  Can't waste a whole cake, right?  So I decided I would deem one, the good cake, the other the ugly step-child.  OK, a bit harsh, but one would be the owner of all the good app buttons, the other, all the less-than-good app buttons. 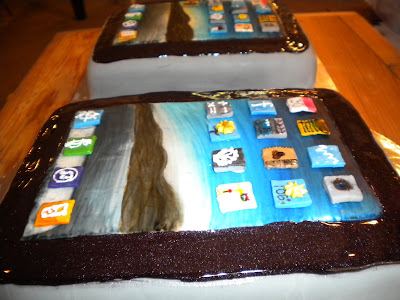 To be totally truthful, my buttons all left much to be desired.  I don't care.  By the time I finished these cakes I had invested over 7 hours of my day (between children's demands for diaper changes, friends, and what seemed like constant snack requests).  I decided the buttons were fine.  Probably the worst thing about the whole day.... 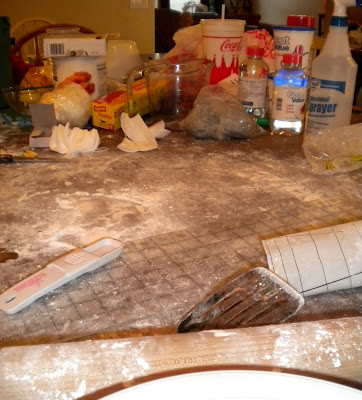 As the beautiful master piece/cake walked out the door, and this was what I ended up with.  My floor is covered in powdered sugar.  It was worth it, but did I mention that I went to the midnight show last night, getting home and in bed around 3:30am?  Ugh.  Where is the broom?

This project was linked up: