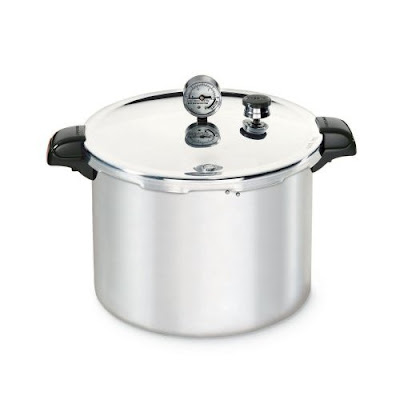 I promised you heart-stoppingly disgusting pictures of my hamburger canning process a few days back.  Today is your lucky day!
A friend of mine is having a Food Storage Canning Event and needed the hamburger canned.  I offered to do half of it.  She dropped off 30lbs of raw hamburger for me to play with :0)  I am just warning you now, this is going to be gross. 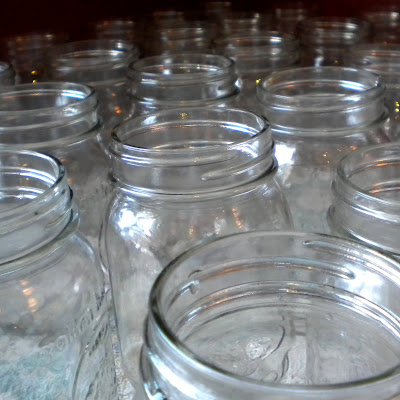 If you are familiar with canning, you sterilize your jars, lids and wash the screw bands.  I do not keep the jars hot.  The hamburger I put in them is cold and I have broken a few bottles along the way putting cold food in hot jars.  After I sterilize the jars, I let them cool on the counter.  I was doing 30 jars so I just sterilized them all, and by the time I got them all done, the first jars were cool enough to fill. 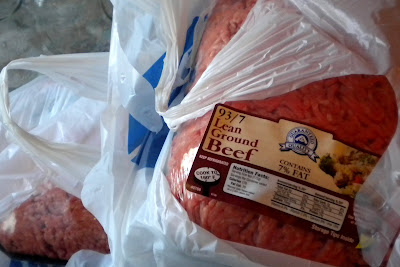 I really like the 93% fat free beef.  Last time I grabbed the 85% on accident, and there was double the fat in the jar at the end-So Totally GROSS!  In planning for how much meat to buy, you can fit one pound in a pint jar, 2 lbs in a quart jar.  It is pretty much exact, probably why the jars are the sizes they are :0) 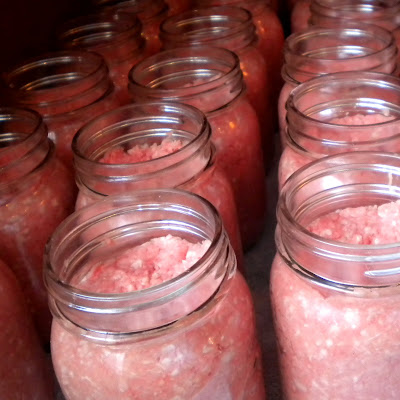 Squish that meat in the jar.  I fill it about 2/3 of the way, then I stick my hand in there and moosh through it all to make sure there are no air bubbles.  *Note* I really prefer wide-mouth jars for canning meat-it is easier to get your hand in to moosh, and it is easier to get the cooked meat out later, but either size works.
After that, I fill the jar the rest of the way.  I fill all the jars I am going to process, then add 1/2tsp sea salt to each pint, 1tsp sea salt to each quart.  I was told by my local kitchen store that there is actually less sodium in sea salt than regular table salt, adding one more reason to why it is the only kind of salt I use.
When all the jars are filled, wipe the brim with a wet rag to get rid of any mess that would keep the lid from forming a seal, and top the jars with the sterilized lids and firmly screw on the screw band.  Process pints for 75 minutes @ 15lbs of pressure.  Process Quarts for 90 minutes @ the same. 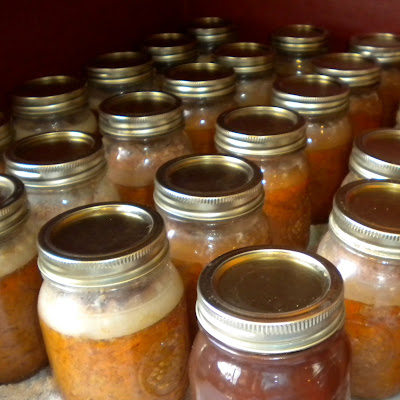 Here is my finished product.  One friend of mine says it looks like an ugly science experiment.  The front jar is not meat, but black beans-that is why it looks different.  You process beans the same amount of time.  I had an extra space in the pressure canner and didn't want to waste it so I threw together one jar of beans.
If you are a fan of beans, you wash 2/3c. of dried beans for pint jars, 1 1/3c for quart, throw them in a jar (no pre-soaking needed!), add the same amount of salt in the jars as you do for the meat, then fill the jars the rest of the way with water.  Same processing times as the meat.
One really gross thing about canning your beef is the ring of fat that accumulates at the top.  It might be gross, but that much fat is in the meat whether you can it or cook it on the stove.  It is actually nice this way because I can reach in there with a spoon and scoop it out easily.  I just hate to look at it...or to scoop it for that matter.  I have also been known to rinse the meat after taking it out of the jar to get the rest of the fat off.  Sounds even grosser, doesn't it?  I know, but then we aren't eating it!
Why can your meat?  I don't know why I do it.  I wanted to learn, for some strange, unexplainable reason.
Bonus points-
More freezer space
Meat already cooked, just waiting for you to create something yummy
No pan mess/dish washing night after night
You know what is in there
Intense flavor-I will throw taco seasoning in a batch every now and then, also spaghetti seasoning
The pride of knowing that you totally made that, all by yourself
Lastly, it is one small sense of connection to all those fabulous women ancestors of centuries past that worked and slaved, resulting in you and I here to craft today!

Email ThisBlogThis!Share to TwitterShare to FacebookShare to Pinterest
Labels: Canning