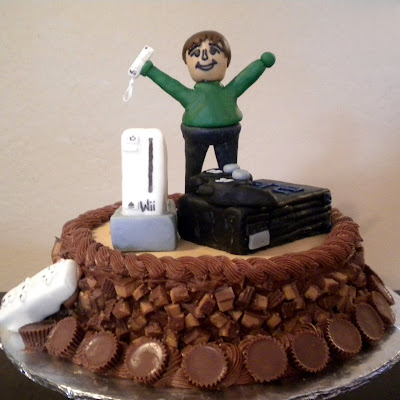 Her-shey Is!!!  I got to make this delicious Chocolate Fudge Peanut Butter Cup Video Game Cake for a party my good friend, and fantastic follower, Jennifer threw for her son.  He is into video games, like any self-respecting teenage boy should be, right?  He has a Wii and a PS2, so what else should be on his cake!?!
The party was a surprise so she had to ask him randomly what kind of cake would be nice for his birthday.  He came up with "How about chocolate and peanut butter?"  I think this cake fit the bill. 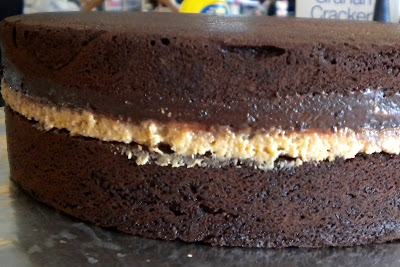 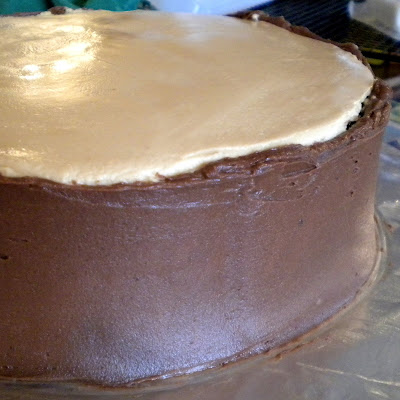 I frosted the top with peanut butter buttercream frosting, the sides with chocolate buttercream.
I think I need a glass of milk just looking at the picture :0)

I chopped up 16 snack sized Reese's PB Cups and smooshed them into the sides.  Next, added the chocolate boarders, small PB Cups around the bottom, and the fondant decorations I made yesterday. 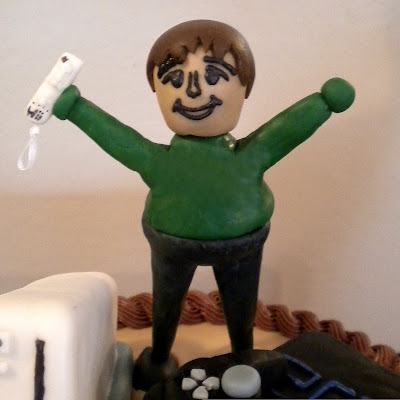 The Wii Mii was the most stressful.  I made a top, a bottom, and a head- all separate pieces, all formed on toothpicks and BBQ skewers.  I got a little anxious and put the head on.  I was worried that if I waited til the next day, the fondant would be too hard for the toothpicks to make it through.  Instead, the guy ended up leaning back a little farther than planned.  The face took a couple wipe offs before I got this one.  I am still not happy with it, but I have to say, it isn't bad for my first fondant molding attempt ever! 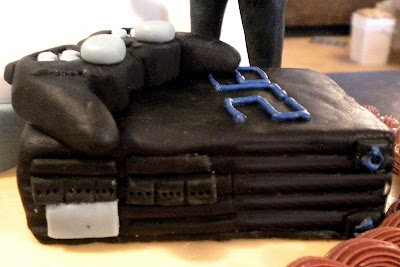 The Play Station 2
I made the base out of a Jello box. Madison and Eli both agreed that the box was too square, so we added a store bought rice crispy treat to the one end.  That seemed to do the trick.  I buttercreamed it, then covered w/ black fondant, used a dowel to make the lines in the front, toothpick for the plug holes. 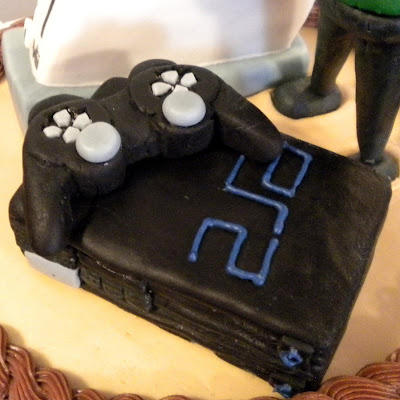 I was rather stressed out by the thought of this controller, but it ended up rather fun once I got started.  I found a picture online to look at.  I didn't have much black fondant left, so I made a log of some gray that I had, then wrapped the black around it.  Then it was playdough time.  I pushed and molded, sliced some with an exacto knife, and vwah-la!  Makes me want to play a mini video game with some barbies or someone very small :0) 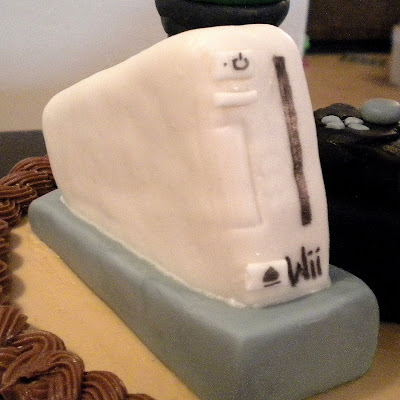 I was going to make the white part of the Wii with just fondant, but was worried that it wouldn't stay standing up over night.  I found some more store bought rice crispy treats (someone left after Bunco last week-thank you!) and wrapped them in the white fondant.  The Wii console was very simple to make from there.  I do need to get another fondant paddle.  I used the one I have to push on one side, pushing against my hand on the other.  That made one side smooth, and put finger marks in the other.  I would switch and it would happen all over again.  Frustrating!  I will put that on my shopping list! 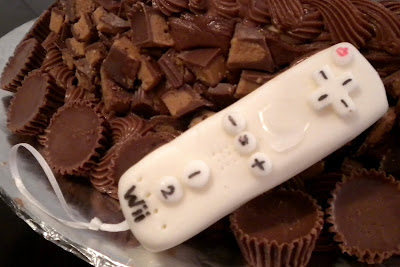 I had a ton of fun making all the buttons and details on this Wii-mote.  I used corn syrup for the A button.  It didn't dry in time to put the A on it(needs more than one day I guess), and ended up dripping a little, but I was able to fix it before delivery.
This cake was very enjoyable to make.  It was fun to try my hand at sculpting and makes me want to do some more.  I would recommend using store bought fondant for the molding projects.  I found that the marshmallow fondant was a little dry and cracky, if you know what I mean.  Oh, and speaking of "cracky"... 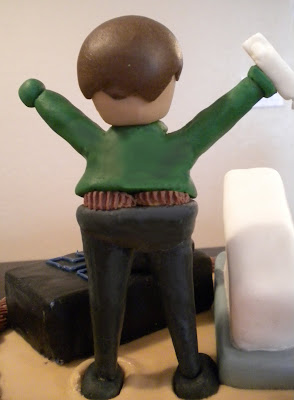 My poor Mii had a little leaning problem, as mentioned before.  I was able to fix it with some wedges of chocolate from one of those small PB Cups.  Ooops, now the Mii has a little "plumbers problem"  Food thing this cake was for a friend and a friend with a sense of humor!    I wasn't sure what else to do.  With regular frosting you can just pipe over the gaps.  I guess I could have added a belt.  Oh well, I am sure her son loved that added effect :0)
Next, I need to try gum paste.  The price is what stops me, but I am very curious how it is different.  That and molding chocolates.  You can expect to see more projects like this in the future!

Email ThisBlogThis!Share to TwitterShare to FacebookShare to Pinterest
Labels: Cakes