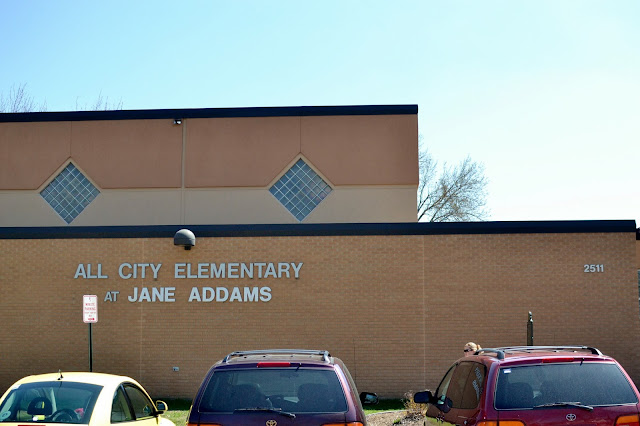 Man do I have a story for you!!!
Last week, Thursday to be exact, I picked the kids up from school and ran to HobbyLob for a few trimmings real quick.  I wanted to make crowns for my Young Women at church since it would be my last Sunday here in Sioux Falls, South Dakota.  I will show you the crowns later, but I was really having a hard time choosing the right ribbons to use.  While I was scouring the shelves in the fabric department I over heard a guy asking the lady at the fabric cutting counter for help.  I didn't get the whole jist, but thought it was cute that he was so enthusiastic about his project, whatever it was.

When I tell you it was taking me a while to make a decision, I mean it was taking me like a half hour or more to pick from the trims on about two rows of shelves.  I really wanted the crowns to be perfect.  In and out of my "Crafting Zone" I started to realize that the poor guy was still plugging the Hobby Lobby employee for help.  He was in charge of some project at the school and needed a sewing project that the kids could do to learn more about how to use a sewing machine.  Finally I just kinda shouted over there, "What age are the kids?"  That was how my random act of craftiness began.

Later I found out the guy's name was Jay and he was a father of a cute little girl  in attendance of All City Elementary in Sioux Falls.  Jay explained to me that every parent with a child enrolled at All City MUST volunteer one half day each week at the school in order to have their child attend.  Crazy and Amazing all at once ;0}  Once a term, parents are to come up with an activity for "Choice Day" and the kids choose which activity they want to attend.
Jay is a jack of all trades, running a carpet laying business during the day and a Karaoke DJ by night, and he really wanted to show the kids that dad's can sew too.  He has a sturdy old sewing machine and uses it all the time to repair his kids clothes and to spruce up his own home.

Here is the skinny of Jay's problem.  He volunteered to show the kids how to use a sewing machine, but didn't really have an idea where to start.  He was kinda thinking about having them make beanbags, but was stuck there.  We chatted a while and I volunteered to come help at the school the next day.

The end decision we reached was to make hot/cold packs, in the shape of hearts, for Mother's Day gifts.  I encouraged him to trace and perhaps pre-sew most of the heart shape, leaving the stuffing hole open, and then giving them to the kids to cut, turn, fill and sew shut.  We later discovered there would be 12 kids in attendance the next day, and that we had 1.5 hours to fill.

We exchanged info and went our separate ways.  I finally decided on my crown trimmings and Madison and Eli sang hallelujah praises when we left the craft store at last. 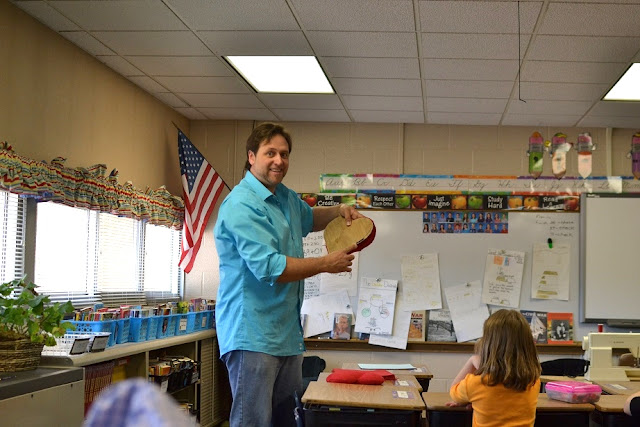 Things went really well the next day.  Emmalee and I showed up to help with sewing, but Jay did a fabulous job and would have been great without us. 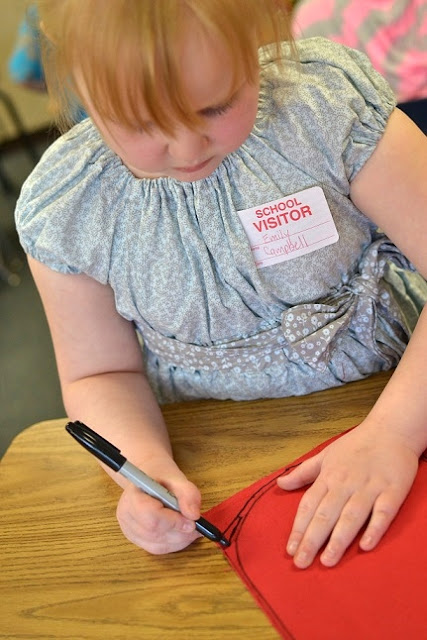 Jay had pre-traced the hearts and sewn around them, then came up with the next step for the kids to do.  He had them draw the seam allowance around the hearts and had them cut on that line they had just drawn.  Brilliant!  I have to say I was totally digging the whole show-kids-how-to-sew activity.  I think that sewing is becoming just another fading art and it is sew so important to make sure we pass that skill on to the next generation!!! 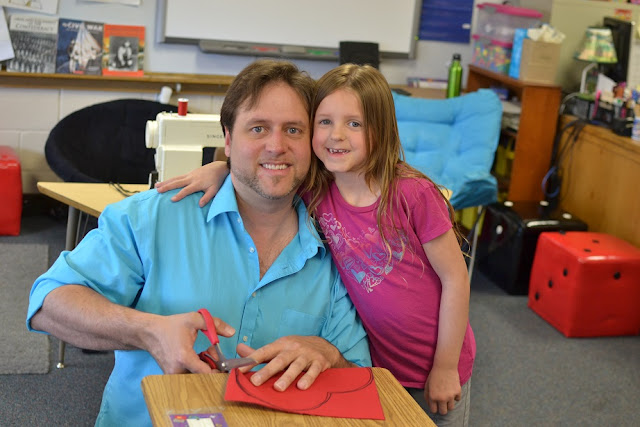 This is Jay with his cute little girl.  She is a Kindergartner at All City so Jay will have many more chances to teach sewing at this school ;0}

We helped the kids cut out their hearts, turn them right side out and stressed the importance of making sure all the seams were smooth after turning.  Jay had the kids line up to fill the bags and I taught them the basics of the sewing machine while I sewed the bags shut.  I let the kids push the pedal while I sat at the machine and took care of the buttons and guiding the hearts.  Bean bags can actually be hard to sew due to the filling.  It has the tendency to fall out all over the sewing machine if you over-fill the bags or happen to loose your grip while sewing.

These are the steps I taught them about using the sewing machine:

Put the presser foot down

The Hot/Cold Packs seemed to be the perfect thing to sew and be able to show them all of these things. 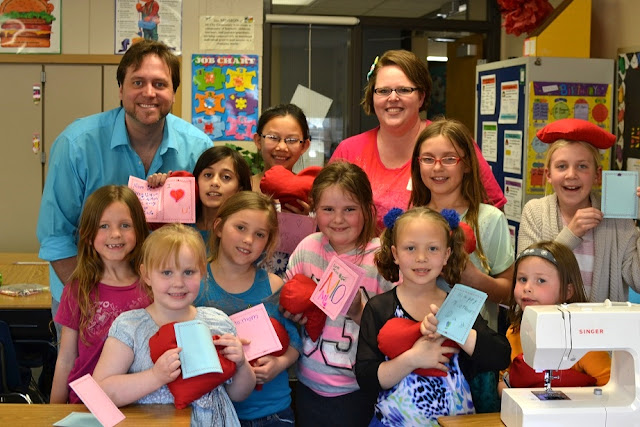 The kids loved it.  They were so cute and totally remembered all the steps! 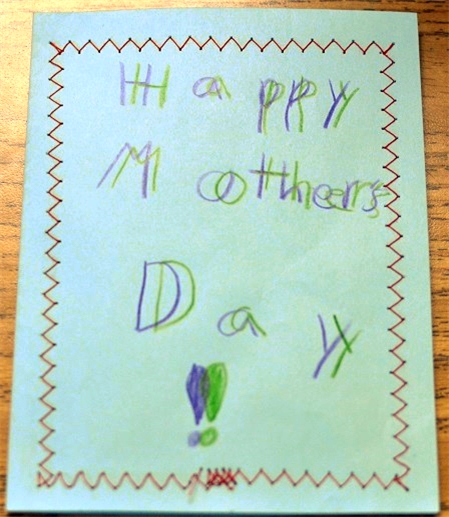 Once we were done with the bags, we had the kids make cards as well.  We stitched around the card to give it that "sewing" touch then had the girls decorate them for their moms. 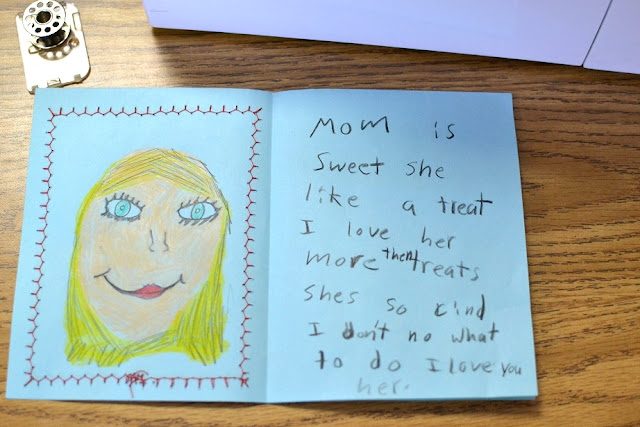 So cute!
This girl did such a fabulous job on her picture and what she wrote to her mom I had to get a picture. 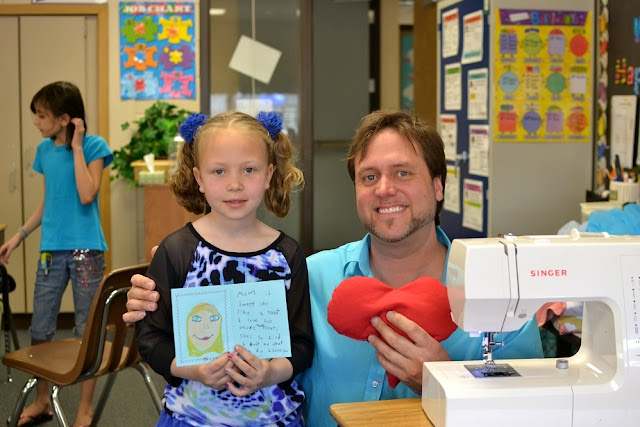 Then she had to get a picture with Jay.  He was like a star to the kids. 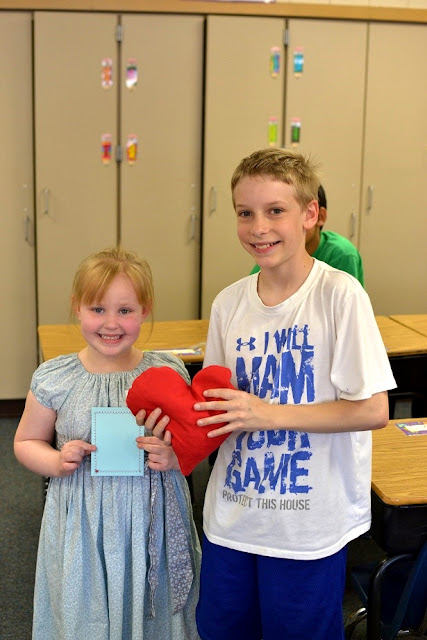 Eli's best friend Ben goes to the same school.  Emmalee saw him and decided she needed to give him the heart she made.  While I was trying to impress upon her that she just gave away MY Mother's Day gift, she whispered something like, "Mom, I think I am in love with Bed."  Oh BROTHER! 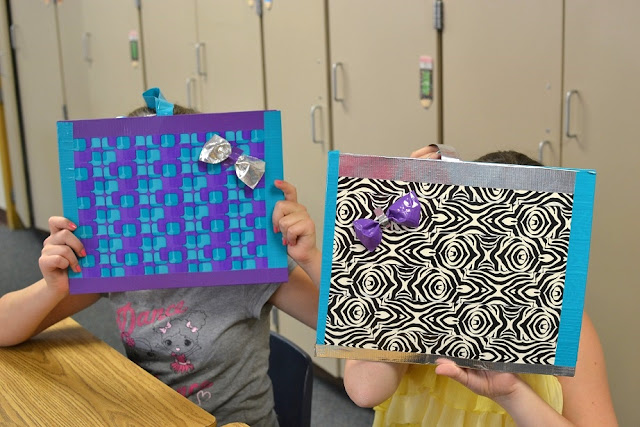 While we were cleaning up the other kids came back to the classroom and showed off what they had made.  While most of the boys went to sports classes, these two girls went to a Duct Tape class and made these cute bags out of folders and duct tape. 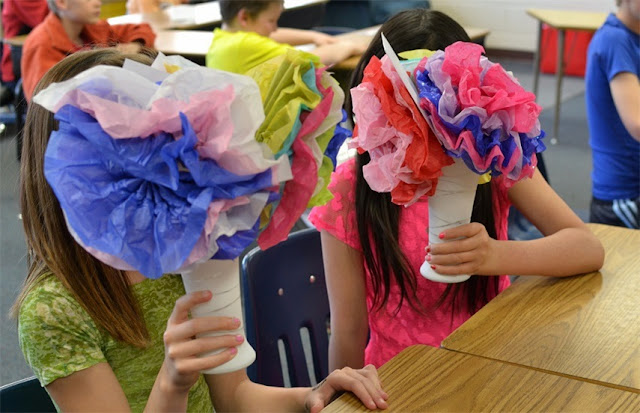 These two made tissue paper flowers for their moms.

What a fun tradition to have at school, Choice Day, where parents come and share what they know and the kids get to have some hands-on time, benefiting from their parent's knowledge!  Love it.

Well, I am glad I finally poked my nose in and got involved in Jay's project.  I love me a little Random Act of Craftiness once in a while.
Oh, and ladies, Jay is a single father of two adorable little kids.  If you want to know more about this blue eyed, bearded man who sews, let me know {Tee-hee}  I can hook you up!
{you are welcome Jay ;0}

Email ThisBlogThis!Share to TwitterShare to FacebookShare to Pinterest
Labels: All Me, Crafting with Kids, Service, Sewing