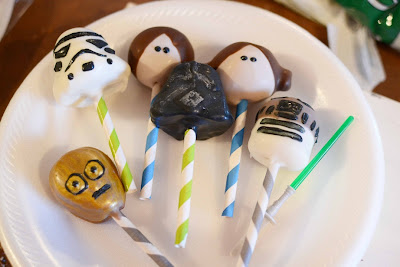 I am embarrassed to even post these, but I also made these Star Wars Cake Pops for Madison's fundraiser too.  They took me all day long to make the three plates of characters and barely resemble them.  I figure if I can do nothing but let you know you really don't want to try this, then my post was not a waste of time :0) 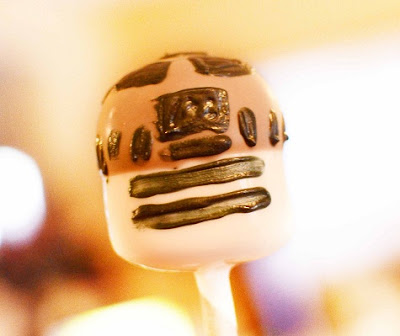 Here is my R2D2.  I ended up painting on melted chocolate with a paint brush.  Looks lovely, doesn't it. 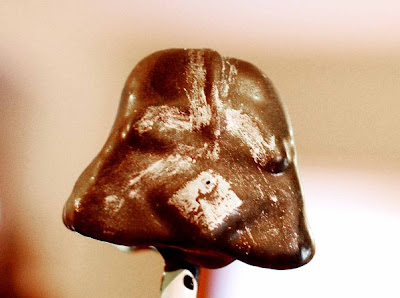 Vader.  I shaped the Oreo Cake ball into the shape it needed to be, then piped chocolate on to make the ridge in the hat and the eyes and mouth pieces before dipping.  I think I needed to pipe a double layer for those marks to show up better after the pop was dipped in the black chocolate. 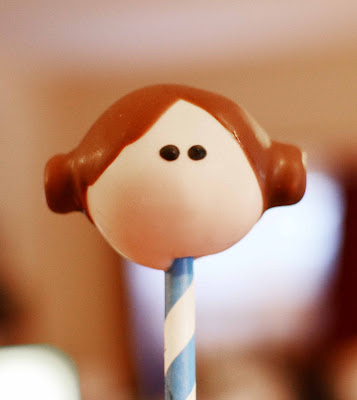 Princess Leia
Dipped the ball into flesh colored almond bark, then stuck two Cheerios, stacked up, in the wet chocolate for each bun.  When that was set I dipped her hair with chocolate almond bark. 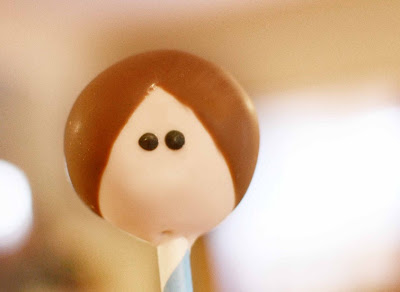 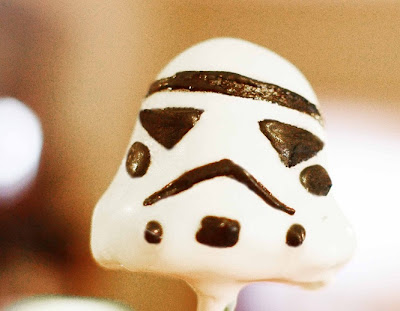 Storm Trooper.  Shaped him a lot like Darth Vader, then dipped in white almond bark and painted on the black.  I had purchased a cake pen to write on the black accents, but it didn't work at all with the waxy surface of the chocolate.  Keep that in mind if you ever consider the torture of making these pops ;0} 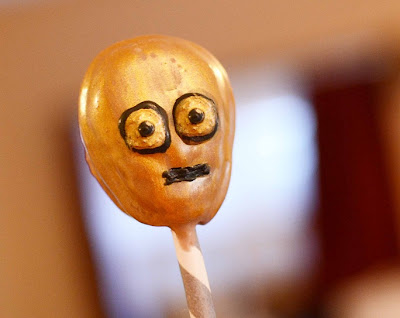 C3PO
Again, piped the ridge around his face and the eyes in chocolate on the cake pop before dipping.  Would do a double layer for this guy too if there happens to be a next time.  I used a tan color of almond bark, then brushed on gold pearl glaze for the bronzy look. 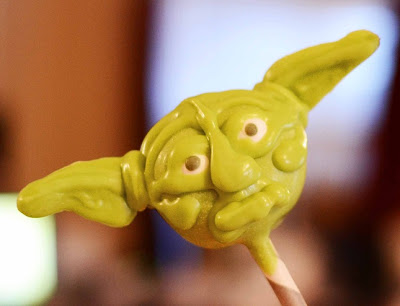 Yoda, how I hate to make you :0)  I found a package of lovely spring green candy melts at the cake store that was just about perfect.  I filled a cup and threw in three dark green melts to make it just a bit darker.  I am not sure what to say about him.  He just went bad very quickly :0}

I guess the consolation is that all three plates sold and were competitively bid on!  So that is good.  I also know that they taste heavenly!!!  Remember, Beauty (or ugliness) is only Skin Deep!