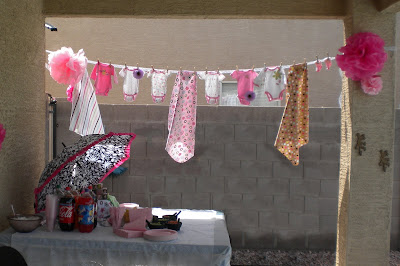 Well, even with all of my gusto effort on the decorations for this on-the-fly, lets-make-everything-the-night-before shower, I still earn D- for picture taking! That means all I have to show for my amazing, under $20 decorations are three pictures of the event from my camera, and three preparation pictures from my phone. I will work on that. On to the decorations!
This baby shower was for a dear little mom of 3, expecting #4. I was asked to do the invitations and found out that there was not a soul assigned to decorate! What! No decorations! For Shame! I quickly assigned myself without first consulting the checkbook. Thus, we have the world's cheapest decorating job. All in all, I must have done alright since they asked to keep everything to use for another shower. Without detailed pictures, I may just have to tell you about my copy-catted decorations instead of show you.

I loved, loved, loved the baby clothes clothes line I have seen all over the web. I had to do one. Ideally I would have loved to get out some of my baby's darling outfits, tea dye them, and commit them to the Vanessa hall of supplies-to-use-if-I-ever-have-to-do-this-again. Because I just moved all of the storage tubs into my closet and don't remember which tub on the bottom of a ten-tub-tall stack the clothes were in, and the fact I just can't do that to my baby's clothes just yet, luckily the dear lady putting the shower on donated all the clothes and blankets she was giving as a gift and we used those instead. I, of course, had to modge podge some clothes pins for the clothes line. Even though cutting the teeny weeny papers was a tad bit ridiculous, they were very easy to make on a whole and stellar-ly cute! I used my after-Christmas 80% off ribbon from Hobby Lobby as the clothes line.

On the table I used a $5 umbrella I bought at Wally World-pretty cute for $5, huh? I took my left over fuchsia streamer, ran a running stitch of my trusty button/craft thread, gathered it and hot glued it to the edge. So cute! p.s. Don't tell my Grandma I opened the dumb umbrella in the house. She will never forgive me.
Under the umbrella, which I laid on the table since I couldn't hang it from the ceiling as planned, I laid a ice cream bucket-upside down and covered with an extra receiving blanket, and set up a cutesie set of baby blocks I had made. Pictures will come shortly. If you squint really hard you can see them there on the table. I took some 1 1/2" wooden blocks, modge podged paper to all the sides, and then modge podged 1-2 pictures of all the baby-2-be's family members- Mom, Dad, Brothers, Sister, Grandmas, Grandpas, etc. Turned out way cute, made a great center piece, and best of all, cheep! 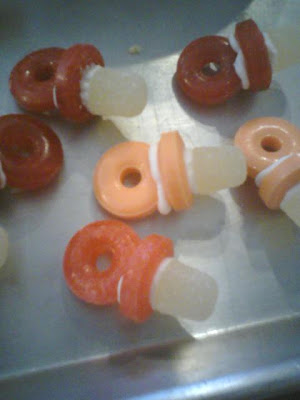 As a little party favor I made candy pacifiers. Sorry for the phone quality. I saw these on a few sites and decided to give it a go. I took two life savers, glued them together with royal icing and set them out to dry. After an hour or two, I glued some gum drops to the tops for the nipple. After a few more hours, making sure the icing was hard all the way through, I tied little pink ribbons around the base and the handle to hide my messy icing. Lots of fans of this one! Again, only a phone pic, sorry no final product :0\ 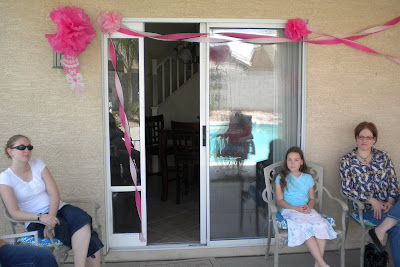 Trying to think of what could add a lot of *POP* without a lot of work or money, I finally thought of those tissue paper flowers. I looked them up on Martha, figuring she would have an extra difficult, but oh-so-cool way to do them. She does them just like anyone else. Here is the link if you want to check it out yourself: http://www.marthastewartweddings.com/article/pom-poms-and-luminarias
I used hot pink and soft pink tissue. I bought four packs for $1 each (Walmart)and was able to get 3 large and 6 small flowers of each color(2 packs of tissue). For the big flowers, they ended up like 18" wide, I took 4 full sized sheets of tissue paper, fan folded it, stapled it in the center, and then just separated the layers. The smaller flowers, I cut the tissue sheets into 1/4's and fanfolded 4 of them together the same way. I secured them to the ribbon and around the patio with my extra clothes pins I had left over from the clothes line. The clothes pins worked surprisingly well. Of course we had tons of wind and I thought for sure every one of those fluffy flowers would end up in the pool. Not so, not-a-one went for a dip. Such a shame, 'cause that pool looked mighty inviting. Anyway, a friend brought streamers and hung those up around the place. Combined with the pink flowers all around, we had a very pretty-in-pink mood :0) 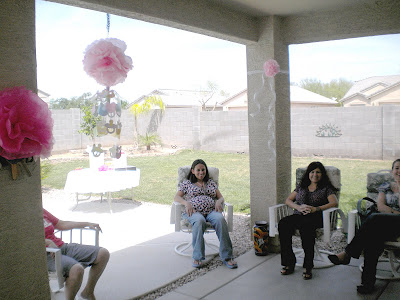 Note to self, even though you are worried about forgetting to take pictures later in the shower, don't let the pictures you take when the first two guests arrive be the only pictures you take! We ended up with a lively crowd of nearly 20 ladies, just not in my pictures. 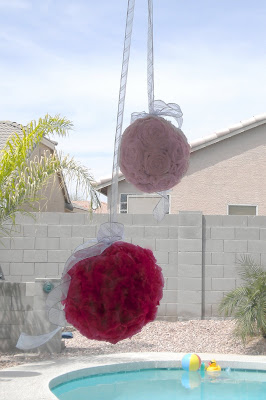 So these babies are my pride and joy of this event. I saw the streamer flower balls on House of Smiths here: http://houseofsmiths.blogspot.com/2010/02/hanging-roses-i-was-browsing-blogs.html I thought they were beautiful and had to try it. ^#*@*Oh, my gosh!%#& Can you say pain-in-the-butt! She makes it look so easy! First, I refused to spend $10 on Styrofoam balls, so I paper mache-d three balloons. That was a blast! Have you paper mache-d lately? Do it! It was so messy my kids didn't even want in, but so relaxing. I ended up just slopping my hands down in the bowl of homemade paste and schmeering it all over the ball of joy I held in my oh-so-sticky hands. It was truly a pleasure to smooth out each strip of newspaper, then smother it with more paste. I would do that part again in a heart beat. 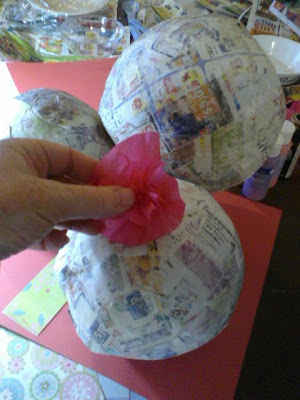 Here is a home-school science project for you. Paper mache a balloon, then put it out in the hot Arizona sun and see what happens. I knew that air, when heated, expanded. I read that it would take a day in between coats of newspaper and paste for the strange-looking thing to dry so I put it outside. I was hoping it would accelerate things slightly. What I got, along with drying faster, were crazy protuberances of balloons that "Hulk-ed" out of the tops of the crusted shells. The up side was that the balloons were completely dry in like an hour. I ended up having to bandage the balls back together with more newspaper in order to salvage them. It all worked out in the end. Needless to say, they were not perfectly round specimens, but the flowers were very helpful in hiding that fact. 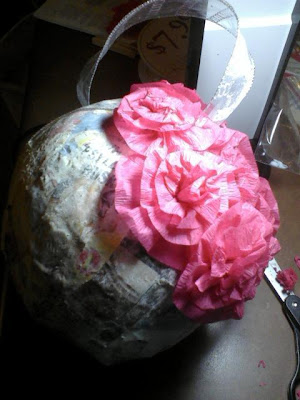 So the Fuchsia one is the one I did, trying to get it to look like Shelly's- fat chance. I twisting those cute little flowers when I had 5 minutes here or there. I ended up with like 30. When I started to glue them on, it only covered like 1/3 of the ball! Boo! "That is it! OK, we will be up all night!" My lovely 11yr old was willing to stay up with me and fight against the dark beginning to surround the exterior of our home. I swiftly changed directions, cut out one ball leaving us with two instead of three. I told Maddie darling that we should so the second ball in rolled flowers instead, hoping it would be slightly faster. I showed her how I wanted them done. She did the rest. Didn't she do a fabulous job! When I get them back I will take a better picture. That sweet child must have burnt all the flesh off of one whole finger hot gluing those rolled flowers on the ball, but her sacrifice did not go unnoticed. The light pink ball was commented on by every lady there today. Madison did such a fabulous job we have requests for classes to teach how to DIY! My lesson for you, if my 11 yr old can do make that thing in the dead of night, so can you!

All in all the shower was a success. I was able to make all the decorations necessary for a fabulous pretty-in-pink baby shower, in pretty much a 24 hour period, for less than $20! Time for BED!
at April 10, 2010