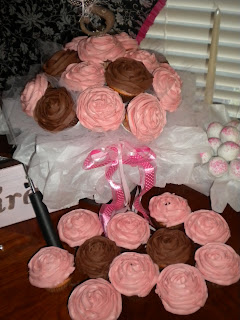 My first attempt at a cupcake bouquet and I have soooo much to tell you!
First, how I started out... 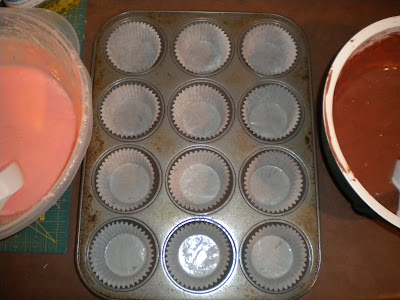 I made one box of Golden Vanilla, died pink for our guest of honor, and one box of Milk Chocolate.  I threw some white cupcake liners into my very rustic muffin pan.
I took two 1/4c measuring cups, one in each bowl, and poured them both into the same cubby at once.  That was how I got.... 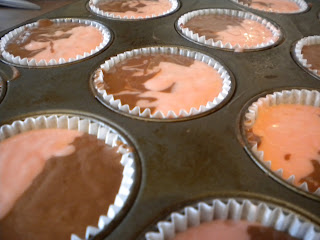 THIS!  I won't go any closer in case this totally grosses you out.  Cake Batter = YUMM
Bake.  Here is a tip, if you are going for big round tops, preheat the oven to some insane temperature, like 425 or 450, and bake those cuties for 5 minutes, then lower the temp back to 350 (i turn off my electronic oven, turn it right back on to 350 and set the timer for the remaining time-don't just leave your oven open or anything like that :0)
When the 5 min is up, lower to 350 and finish for another 11-15 min.  PLEASE start at 11 minutes.  Nothing worse than rock hard cupcakes!  OK, lots worse, but not when you are making a cupcake treat!
So, on to the bouquet part.  I read and read online.  Most sites tell you to use a pot, terra cotta pot for plants, and stick a styrofoam ball in it.  You stick popsicle sticks into it, then shove the cupcakes on those.  After the LEGO Head Cake incident, I am much more leery about pushing the force of gravity on cake!  I opted for the make-a-cup-bouquet-and-stick-ur-cupcakes-in-them technique.  More on that later... 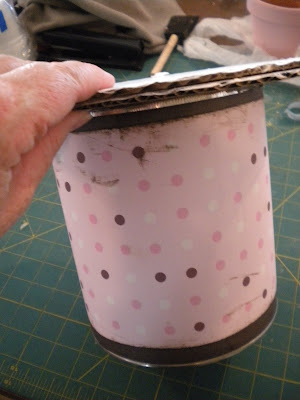 Since I had not a huge terra cotta pot, I used a no.10 can.  I buy tomatoes from Costco when I cook for millions and clean out the cans to use to keep my project leftovers in.  I emptied out one of those, lined it with paper, and hot glued a cardboard plate to the top.  Then I turned the thing over, not trusting the glue that actually stuck to the rim, and added another ridge of glue.  Theory: if the glue doesn't stick on top, hopefully the ridge of glue around the outside will keep the plate from sliding to the floor, maybe. 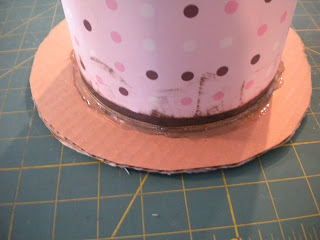 Like-a-dis!
Now is where we get very weird and where the swearing comes in.  A new stapler is on my buy-me list now after this step.  It doesn't help that I bought my stapler in 1994, abused it several years, and don't think it even started out working.  Moving on... Start with 5oz plastic cups.  If you can, buy them in white.  Mine were clear, not a problem, but white will be that much nicer.  I don't actually think that the 5oz were big enough.  I think I would have gone for 9 or something like that.  My muffin tins are of the average size, but my cupcakes were like my little girl into her shorts, it was a shoving battle between me and the container!  The 5 worked, but I did have a couple pop out occasionally.  So, staple them together.  You assemble like this: one in the middle, staple 6 around the outside of that one, staple 8 more together in twos, then staple those 2s to the 6.  If there is room, not on mine, you can do one more around the outside.  The instructions I found said 19 cups, I only fit 18.  Also, I decided to cut the bottom off of my cups.  Personal Preference, don't know what it actually did, other than made the thing not quite as tall-more room underneath.  You should end up with something like this... 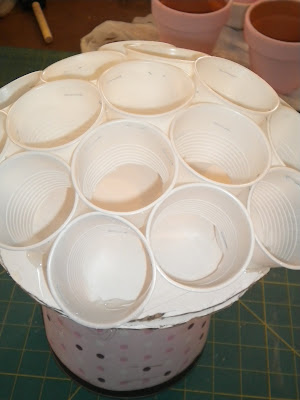 I hot glued my flower-like cup sculpture to the top of the cardboard plate.  I finally, at this point, figured out what they meant when they said to put it on a plate.  I thought somehow this cup thingy was supposed to fit into a pot.  It does not!  Glue to a plate of some sort.  You could even skip the can on the bottom, whatever tickles your tummy.
To add a little filler, hiding my cups, I hot glued tulle to the edge.  Don't know how much, I think about 1/4 yard, doubled over.  Cut off the little bit extra, cut it into 4 squarish pieces, then hot glued into spaces here and there like this: 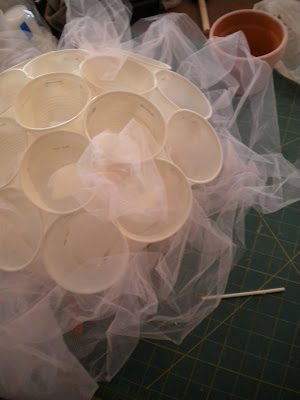 Ignore the sucker stick.  I was using it instead of my flesh to push the tulle into the holes once it was covered in glue.
Next, for no reason what-so-ever, other than I thought the plate would look funny just hovering over the can, I glued tissue paper underneath, to the can, then tied a ribbon around it, then another, to hold the tissue in place where I wanted it. 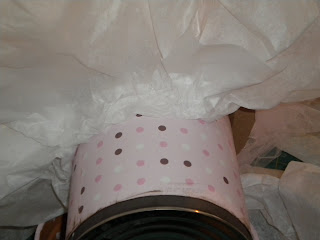 This is what I ended up with: 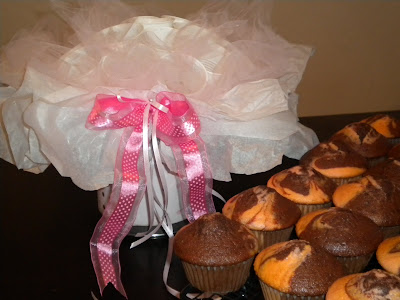 It looks like one of those recycled crafts my grandma would bring home from her summer in the RV park.  Except hers had Christmas lights in the middle of the cups-minus the pink ribbon too.
I frosted the cupcakes with my biggest star tip, not the big one-no.21, the even bigger one that is too big for a coupler.  Start in the middle, go in a swirl, around and around until it looks like these below.  It was recommended, and I SECOND big time, that you do your cupcakes ahead of time so they get crusty and hard-ish so you can move them around without destroying the design.  I actually fit mine in the freezer until it was time to go. 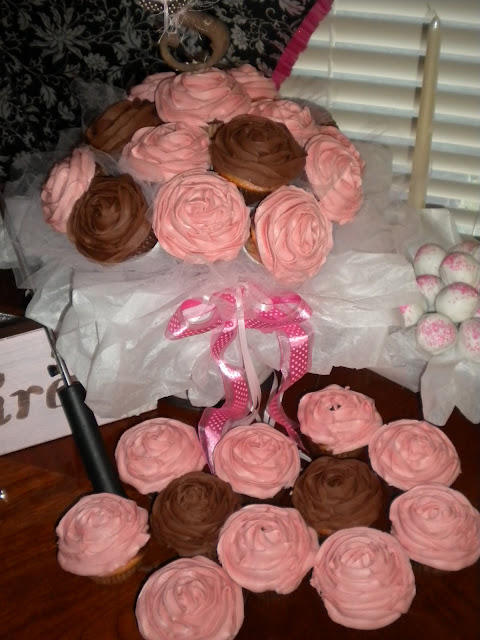 For some reason blogger won't let me show this picture in large...very frustrating.
Anyway, I was all proud of myself because I took way better pictures at the shower tonight, then realized that this is like the only one I got of the bouquet.  Oh, here is this one too: 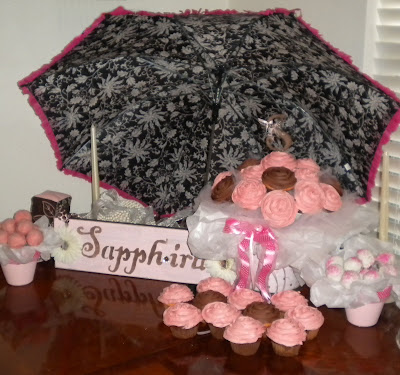 Good luck. You have to try this! You can do it the other way if you want, but let me know how it goes!
*Update* I posted a new was to make a cupcake bouquet HERE!  Check it out :0)
I am linked up to: