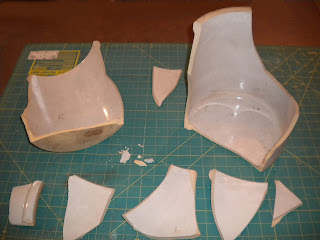 That's what I said when my beautiful crock slammed to the floor and my husband said he would fix it.  I kept saying, "What a Crock" each week, then month, as it sat there undisturbed in it's broken heap.  I murmured those words even still when I cleaned the garage months ago and found the very adhesive that was needed to do the job.  We owned the stuff!  We didn't even need to purchase anything or leave the house for supplies!  It was those words I mumbled last night when I finally decided I had waited long enough. My husband took his big engineering exam last weekend.  It had been his excuse, the hours he had to study each night, for why things just couldn't be done.  All the while my precious piece of crockery laid there begging for repair.  He had 4 whole days to get to it.  Isn't that long enough!
I am sure I would have gotten to it if I had had four days ;0)
Anyway, just in case you have a fallen solider in your house, a wounded mound, suffering after war with your kids, here is what I did...

This is the stuff we had in the garage. We used this product long ago. Our house we were renting had a porcelain pedestal sink that was bumped by a passing laundry basket(don't know who did that). It is by Simpson Strong Tie, a company my hubby is a fan of, and it has lousy instructions! The center picture is the beginning and the end of the instructions. Ta-dah! 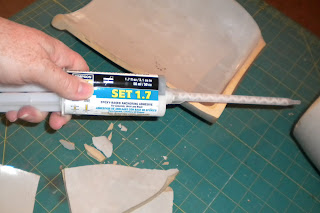 It isn't really rocket science, but would have been nice to have been slightly more detailed.  The jist-unscrew lid, attach nozzle(comes with 2), insert handle in the bottom.  Push until the stuff starts to come out like-a-dis 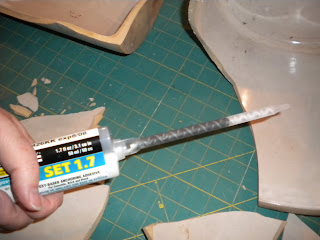 Then you are ready to go!  When you are all done, you take the nozzle off, throw it away, put cap back on, take handle out of bottom, and put away for future casualties.
This is also great for repairing brick walls, tile and such.
I should mention that it would be good to know about where all the pieces go before you begin. 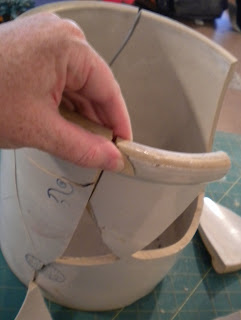 Once you have that figured out, start from the bottom and work your way up. 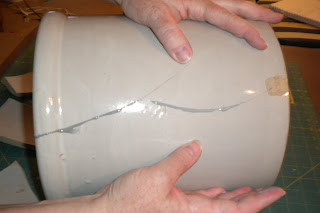 I put it on like a school girl with Elmer's glue, connect the next piece, and wipe off the residue.  That detail was also missing from the instructions-the clean up.  I used a paper towel, wiped it down, then ruined a sponge, which when wet, wiped the smears off nicely. 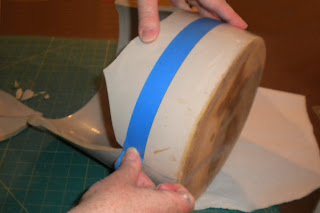 I secured it with painters tape-hoping that it would not stick to the glue itself-it didn't! 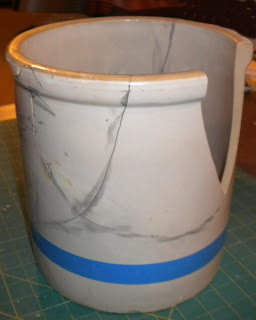 I only had the whole thing pop out and had all the pieces fly once.  Aren't you proud? 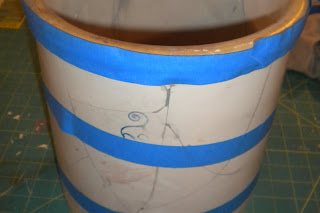 This is where we left it last night. 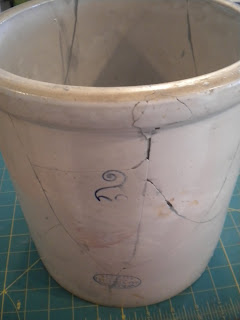 Not the prettiest, but it works for me.  I love this thing so much I just couldn't bare to get rid of it.  Had I more of the small pieces it would have looked better.  The way I see it, this crock is a direct resemblance of ME!  I'm cracked, totally, and just held together with glue.  I don't thing I would like it if someone threw me out, even though they loved me, because I'm not quite as pretty as I used to be :0)  Besides, we are both still useful and still do the things we do JUST as well as we used to! 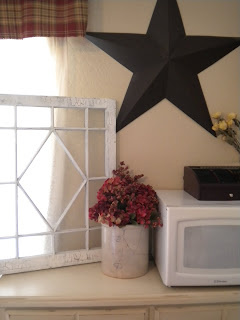 Email ThisBlogThis!Share to TwitterShare to FacebookShare to Pinterest
Labels: Fixed