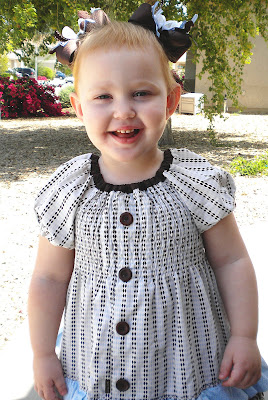 This has to be my favorite dress, HANDS DOWN! I bought this Old Navy shirt at Goodwill on half-price Saturday for $2 with this design swirling in my mind as I pulled the hanger off the rod. Of course I simply ignored it for nearly two months as I ran about in a Home school, Cub Scout, Lego birthday flurry. 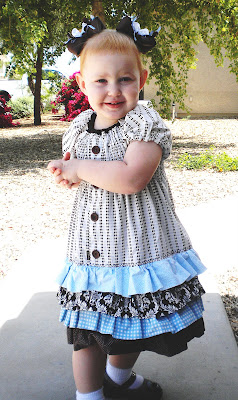 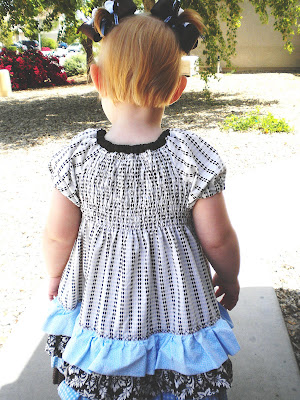 When I saw the rows and rows of fabric 40% off at the Joanns sale last week I suddenly remembered the darling dress I had filed away in that dusty files of my brain. After less than $4 in ruffle fabric, and of course 2 hours of walking the isles and child taming, Emmalee and I sailed proudly out the automatic doors into the great, newly wonderful world. We now had a purpose. I really never could have imagined that this dress would come together as well or as easily as it did. I put this baby together in no time and it turned out so dainty and sweet. The bliss of making a dress from an already existing shirt is that you have next to no hemming. I do have a ruffler foot for my sewing machine, so that made the ruffling job WAY faster, but this is still so easy to do. I know you can do it too. I will show you how. But first, one more picture of Emmie! How about the back view. 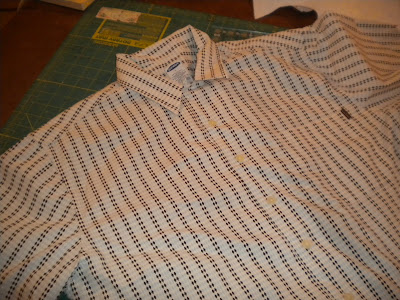 Aren't you proud of me! I am, and I will tell you why. I remembered to take a BEFORE shot! Write that down, for the record... So here is the shirt, $2 off the rack at Goodwill. Loved this fabric. Kind of silky. It was made in Shri Lanka :0) Also for the record, while we are record keeping, this idea is a COPY-CAT from my favorite idea ever, HERE from Dana at Made! 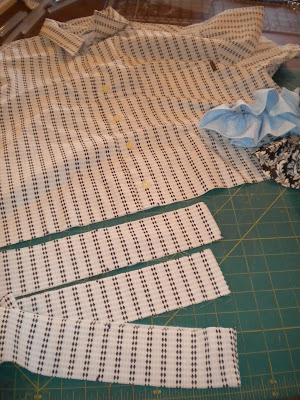 I started out by cutting my ruffle fabric. I wanted the ruffles to be 3", give or take, so I cut the fabric 6"-I got 1/4 yd of each, cut it in half, sewed it together long wise, and marked them every 1/8 portion (you do this by folding the fabric in half-mark, fold in half again-mark mark, fold in half again-mark mark mark mark). Then I cut three strips off the bottom of the shirt- 2 1/2". I made the strips shorter so that each ruffle would overlap the next. Finally, I marked the shirt strips into 1/8th portions, on the top of the strip and the bottom. I guess when I finally took this picture I had already ran my ruffles through the ruffler foot on my sewing machine. If you have one, I ran it on the 6 at about 4-if you catch my drift. Back before the ruffler foot, I would set a straight stitch to the longest stitch possible, sew a line(you are supposed to do two, but I am too lazy, not to mention too cheep to waste the thread), then pull gently on the bottom thread to gather. Just pull, then push the gathered part down the line, then pull some more. I don't know why I am doing this, I feel terrible at writing directions :0) When you too realize this you can just refer to the link mentioned above :0)) that is my double chin emoticon 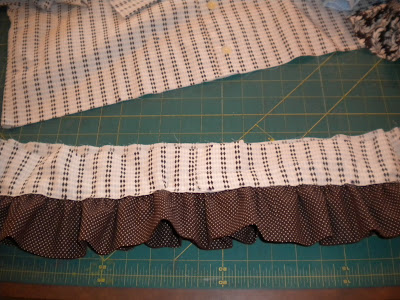 I am sure the professional seamstresses out there are crying, but I simply sewed the bottom ruffle to the bottom hem. I did a zigzag stitch over the top edge of the ruffle to keep it from fraying. Had I done it the right way, I would have serged the ruffle before putting it on or sewn it to the strip right sides together, then serged. But that is what I am here for, to make you feel better about the way you do things-not the wrong way first :0) 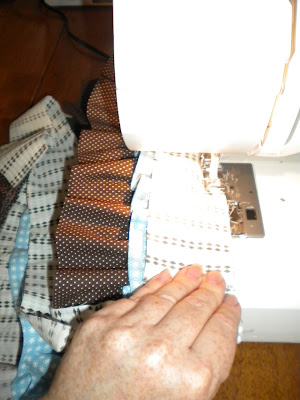 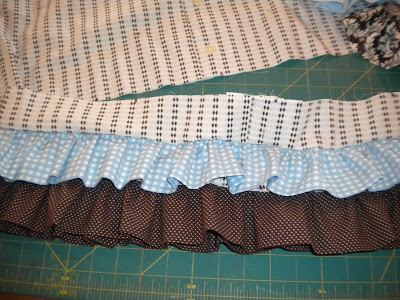 And it should look something like this when you are finished. Keep up the good work! The good thing is, if you didn't get the strip or the ruffle the right side where it needed to be, it won't matter too much until the last ruffle :0} 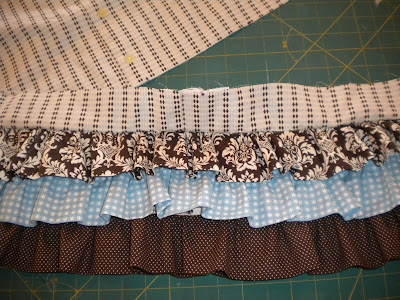 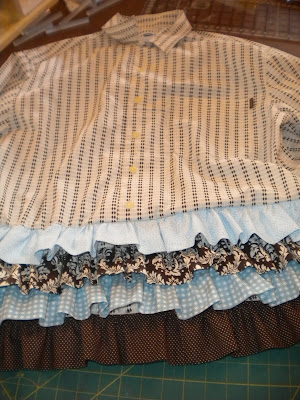 And here is the last one. You turn the whole top of the shirt inside-out,stick the ruffle piece inside, right-side out, and the last ruffle, and sew all three pieces together at once. When I was finished I had to call the kids over to see this! We all voted that dad should wear this to work on Monday! He would be simply rufflicous! Doesn't it just scream Structural Engineer? 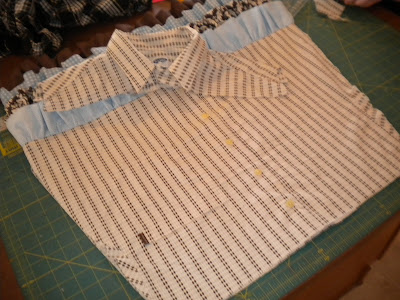 Next step, cut off the sleeves and collar-top-of-shirt portion. I just used my ruler and rotary cutter and cut them straight off! Then I straightened up the sides so they angled up. There really was not one speck of science to it. I was simply aiming for straight sides I could sew together to make one tube-ish shape. I did just that, sewed up the sides to make the shirt a sleeveless tube. This is when I serged the ruffles, when I could serge the sides at the same time. I also sewed the buttoned part closed so it would not catch when I began the SHIRRING! Shirring is an obsession of mine. If you can't add chocolate chips or cheese to it, SHIR IT! The lady at Joanns and I had a show down over whether it is called shirring or smocking. Call it what you want. I call it shirring! HERE is the tutorial I used to figure out how to do it. Like any true art form, you just have to try it, and fail, to figure out the right way to do it ;0} 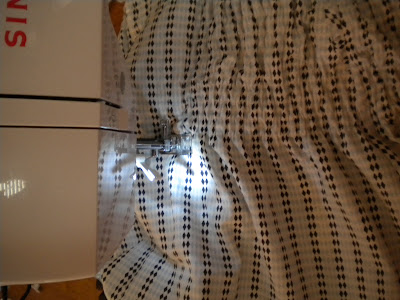 This is me shirring. I realized just now that the photo is sideways. Due to the fact I think it looks kind of cool, and laZiness, I am leaving it. I like that it shows the shirring right side up. Shirring-easiest thing ever. Wrap elastic thread, by hand-not stretched, in your bobbin, and sew. End of story. 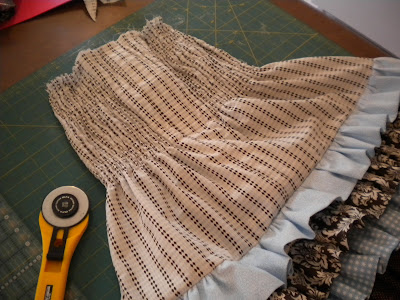 Here is what you are left with. While shirring I realized I wanted different buttons on the dress, so I snipped them all off. I also decided that the pocket I had decided to leave on would look bulky and not shir evenly compared to the rest of the dress, so I picked it off also. 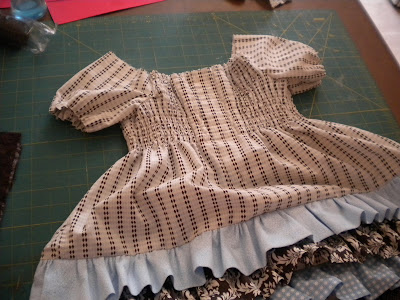 After a bag-making break induced by my guilt-trip laden daughter, I came back and used my pattern to cut out the sleeves to the proper size. I used the dress pattern to cut the arm holes and the collar shape. You might want to pre-wash the dress before doing this step due to the elastic thread shrinking when laundered, I of course didn't have a load of clothes this color and simply skipped that step. Still turns out fine, just might be smaller, but stretches easily. Anywho, note for simplicity pattern 5695 that I like to use: I think the back of the dress is too high and I stare at it the whole time my girl is wearing the top I made, not shirred, because there is a bubble right at the base of her neck. I recommend cutting the back to have the same curve as the front. The first dress I did, I did not, but it was shirred and it hides it. After the botched top, I cut my cardstock pattern I had made so it was fixed. All of that was to say, trim the back about an inch lower:0) Next, I slipped elastic into the sleeve's hem, already there, and attached the sleeves to the dress. Isn't she cute? 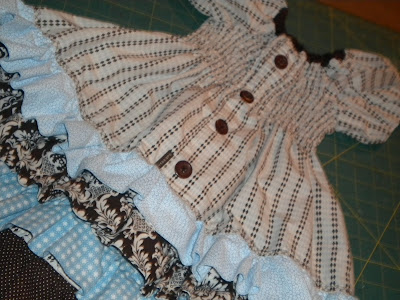 Final steps, sew on a piece of bias tape around the collar, run elastic through, Sew on new buttons. Oh, go back and un-pick the front, down towards the bottom button, so you can re-sew on the tag, cause it is cute. That was a last minute mind change. 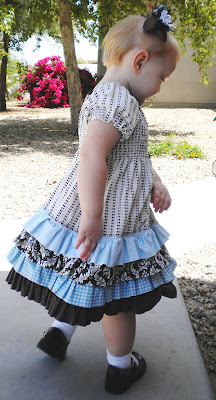 Here is that adorable dress. I took 20 pictures of Emmalee in it and got a whole 3 of her face before she whipped around. That would mean all the rest are of her back or too blurry from the swoop-around to use. Here are some anyway. One day when I am rich and famous I will buy a better camera. Maybe I should just find a less energetic model :0) 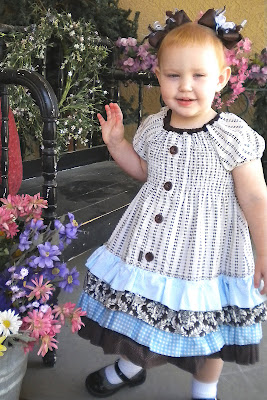 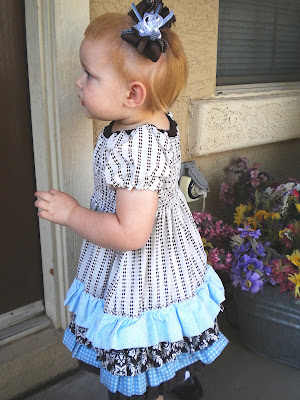 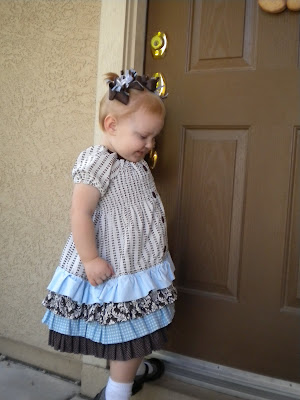 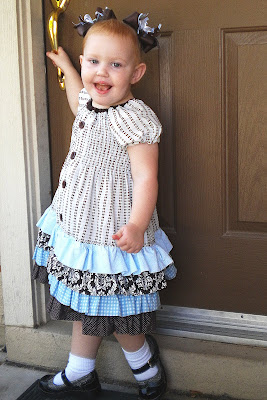 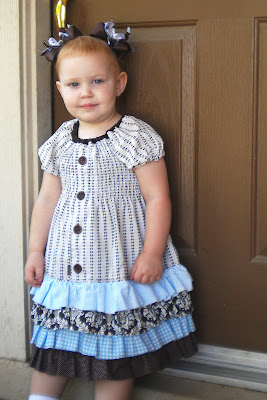