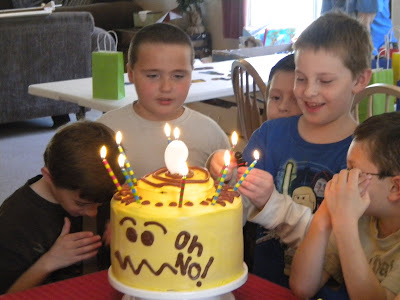 Here was Eli's request for his cake this year- A Lego Guy's Head. I told him I thought it would be a smashing idea, but I would only do it if I could fill the head with vanilla pudding dyed pink so that when we cut into the cake the pudding would ooze out all over the place. My husband forbid it saying it would traumatize the children and the other mothers wouldn't approve. I guess that means... I have to do it now! 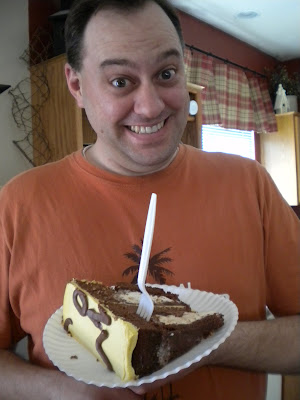 Several problems followed. I baked three 8" cakes and a 6" short one to go on top for the lego connector piece. I cut the middle out of one of the 8" cakes and filled it with slurpalicious vanilla pudding. Torte, stack, torte, stack...crack..ooze..sniff, sniff, yell for help. The pudding oozed all right! I didn't make the cake from scratch or use my top-secret way to make a cake mix into pound cake like i should have. Instead I baked more cakes, this time 10", baking a 6" pan filled with beans (for weight) into the middle thinking if the hole were baked in to the center it wouldn't crack. Wrong. It cracked, big time too. So, final decision, make cake ball stuff (fabulous Christmas treat-baked cake, stir in frosting, dip in chocolate, eat all by yourself) with destroyed cakes, smoosh into hole, cover with frosting, add next layer, fill with melty ice cream, freeze, and frost at the party is starting. Whew...Who's idea was this anyway! 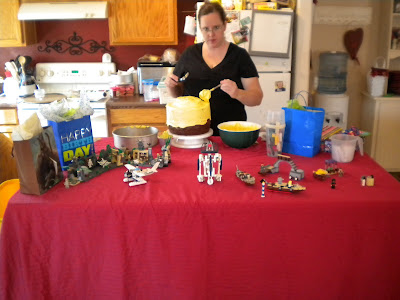 Pulled it off, don't you love all the junk on top of my fridge. Don't you just love how pictures taken randomly can show you how horrible you are at housekeeping? Anyway, did a two face lego guy. One side smiling, and at Eli's request, with dots on his face to show five-o'clock-shadow, one side trembling with fear at the suggestion we eat him! 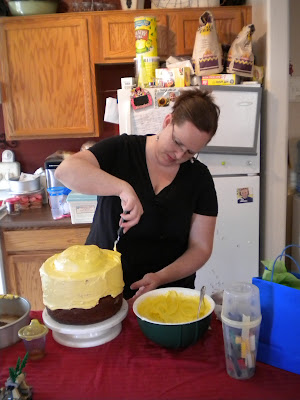 I served this whole, six cake mix cake, and threw away the leftovers. Good riddins! 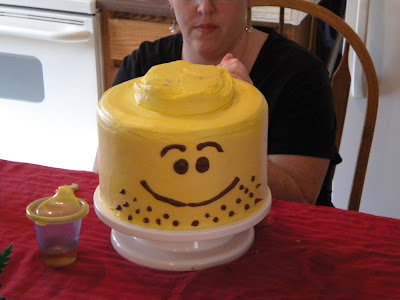