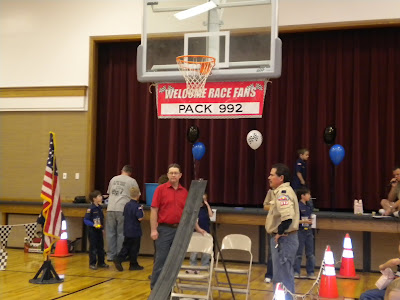 Man were we off to the races in our Pinewood Derby this year. It was Eli's second derby, the first on I was in charge of (yikes)! We had a lot of fun planning it though! We got traffic cones from the city and lined the track with them wrapped in these checker flags. We had the race posting up so that the kids could keep track of their standing. 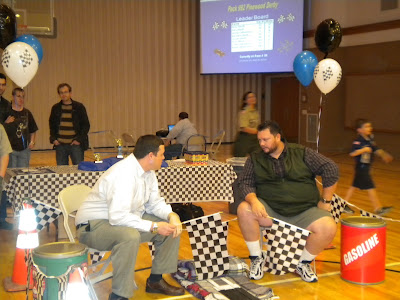 These fine gentlemen were our judges. Below is our wonderful wolf leader not too happy to have her picture taken. 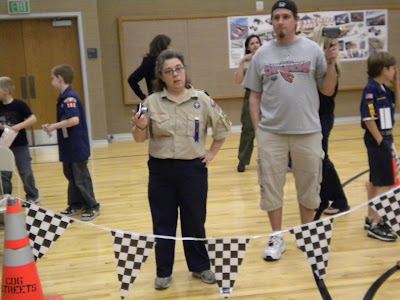 I copied most of the things we did from our fabulous Primary president who put the derby on last year with such style and class as has never been seen before. I did ad my own little things here and there. Like the concession stand. I brought my quilting frame, set it up on a table and draped a sheet from the top of the wall down to the frame. We filled the stand with popcorn donated by the local theater, marshmallow pops and other treats cleverly named car-related things like grease swabs and axle rods, etc. We gave each child three tickets they could redeem for treats of their choice and had the activity day girls run the stand. Total hit! 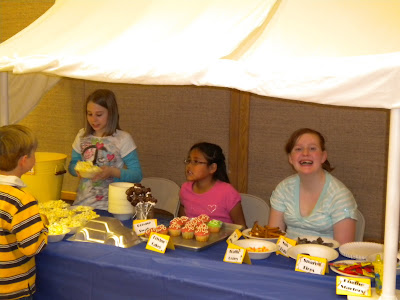 This would be my son! Overall winner!!!! He planned long and hard what design to use for his car. Thanks to mom ruining the first one, he had a second chance to change his mind, landing on this beauty! He can't wait to go to the district race and give that one a go!